The guy that built Terry Crews a custom PC has come back to help Post Malone build his very own custom gaming PC.

His name is JayZTwoCents and he has his own PC-related tech channel on YouTube. With such amazing past experience under his belt, Post Malone felt like he was the perfect person to go to get a sick new PC build.

JayZTwoCents hasn’t actually started building Post Malone’s PC yet. However, he has been busy coming up with some solid design ideas. In JayZTwoCents’ latest video, Jay showcased his ideas with Posty.

The entire PC build was designed to be inspired by the cover art for Post Malone’s upcoming album, Beerbongs N’ Bentleys.

Everything about the PC represents Post Malone’s character or his music in some way, and we’re just as excited about it as Post Malone is.

To begin with, we now know what PC case Post Malone will be using for his custom gaming PC. It will be the Singularity Spectre.

This thing has a large tempered glass front piece that actually doubles up as a water block to help cool the PC. This case will set you back $950 on its own. Some gaming PCs don’t even cost that much.

Once the PC has been built, it will be custom-painted to have a yellow color scheme. This represents the yellow used in the Beerbongs & Bentleys cover art.

JayZTwoCents originally wanted to add a Bentley grill to the side of the case, but Post Malone mentioned in the video that he’d prefer the case to have the checkered metal grill aesthetic instead.

The two of them discussed the concept and then came up with the idea to add the checkered metal style seen in the middle Bentley grill pictured above.

The metal sheet would cover the entire side of the case and a small Bentley logo will be added to the top. A small metal logo bearing Post Malone’s name will also be added to the bottom.

Because the PC will be watercooled, both Post Malone and JayZTwoCents decided that the color of the water coolant will be yellow to represent Bud Light, Post’s favorite drink.

JayZTwoCents still wants to find a way to make the liquid froth up like a real beer would. It would most likely end up looking more beer-like than the rendered concept image showcased below. 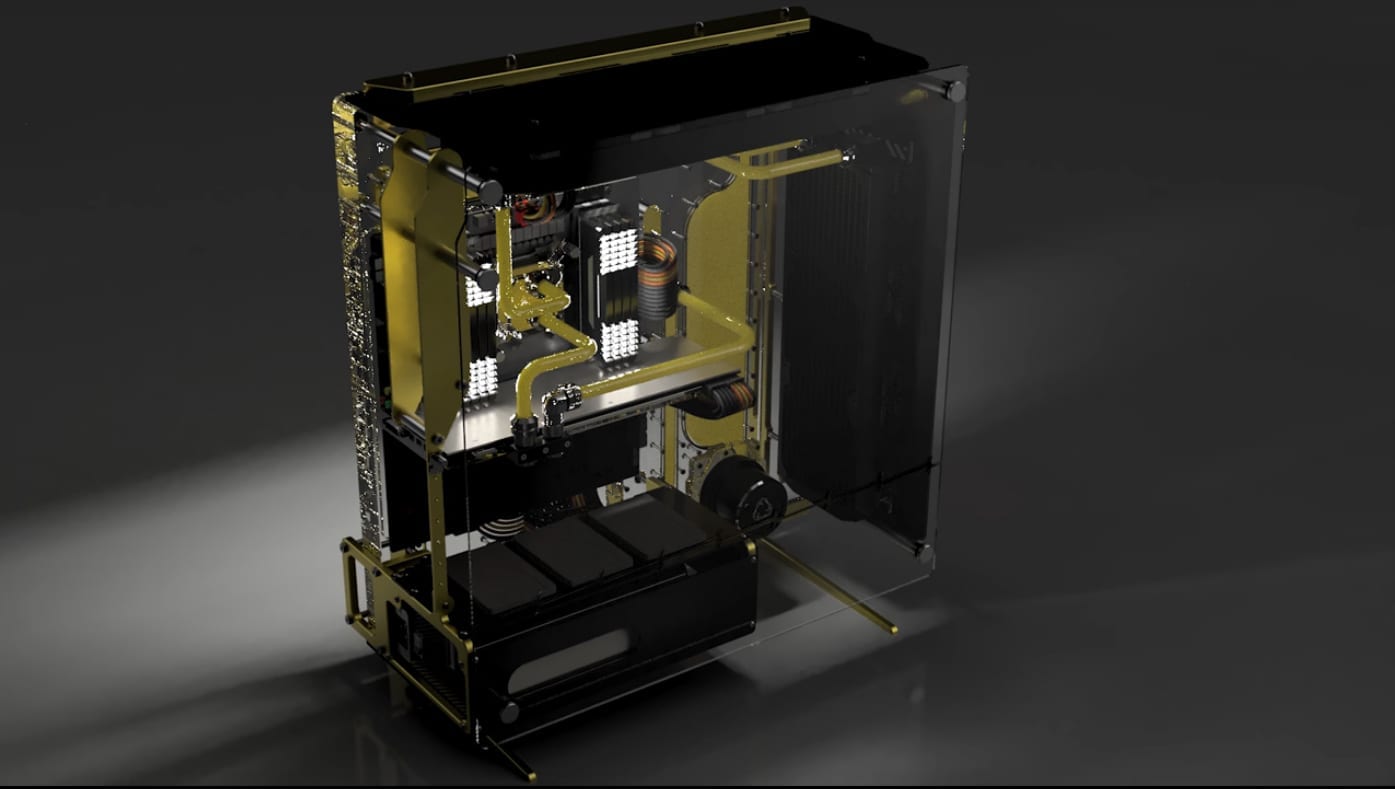 After adding the beer-colored liquid coolant and the Bentley grill, JayZTwoCents wanted to incorporate barbed wire into the PC somehow.

Post Malone previously mentioned how much he likes the aesthetic of barbed wire. In fact, he loves it so much that he even got a line of barbed wire tattooed to his forehead. Barbed wire is also a common theme within the Beerbongs & Bentley album art.

In another rendered image, JayZTwoCents showcased how Post Malone’s PC could have barbed wire decals added to the glass panel on the front of the display. You can see how it would look below.

Firstly, in the JayZTwoCents video, Jay mentioned that Post Malone’s PC would have two graphics cards. It makes sense that these cards would either be two GTX 1080s or two GTX 1080 TIs.

In one of the rendered images showcased above, 4 RAM sticks can also be seen. We think JayZTwoCents will go all out with this build, so 64GB DDR4 might be a possibility.

We don’t yet know what processor or motherboard Post Malone will have, but it’s bound to be something high end.

If the Terry Crews build is anything to go by, Post Malone will be given 1-2TB of SSD storage and 2TB of standby HDD storage.
How Much Does Post Malone’s Gaming PC Cost?

With the information provided above, we can get a rough estimate on just how much Post Malone’s PC will cost.

We won’t factor in any of the custom machine work that has to be done to the case, or the price of a Bentley grill, but we can factor in the price of all of the components.

First up is the case – like mentioned before, this thing will set you back $950.

After that, we have the motherboard. Let’s be conservative here and say JayZTwoCents goes for an I7-8700K. That’ll cost $350.

After that is the motherboard – a good motherboard that works with the 8700K will cost $150.

It’d make sense that JayZTwoCents splashes out on a good power supply. That’ll cost at least $150.

The price for watercooling has to be considered, too. Typically custom water cooling loops can cost anywhere from $200-$1000, but we think it’ll be in the upper end for this PC. JayZTwoCents is the bound to go for the highest quality kit here. He is the go-to watercooling guy on YouTube, after all.

The estimated total cost for Post Malone’s PC comes to a massive $6,400. If you’d like to watch the video for this PC design, check it out here.

Do you think Post Malone’s new PC looks tight, or do you prefer the red and blue Old Spice themed Terry Crews build?

Everything You Need To Know About PlayStation 5: Price, Games & More!

Everything You Need To Know About Xbox Series X: Price, Games & More!

Does a Wheel Make You Better at Racing Games?

How Capcom Became the Masters of Gaming Horror

An Interview with Joe Sugg… Done Entirely in The Sims 4

The Binding Of Isaac Gets ‘Sequel-Sized’ Expansion This December

Ninja Reveals To Fans Why He Stopped Playing Fortnite