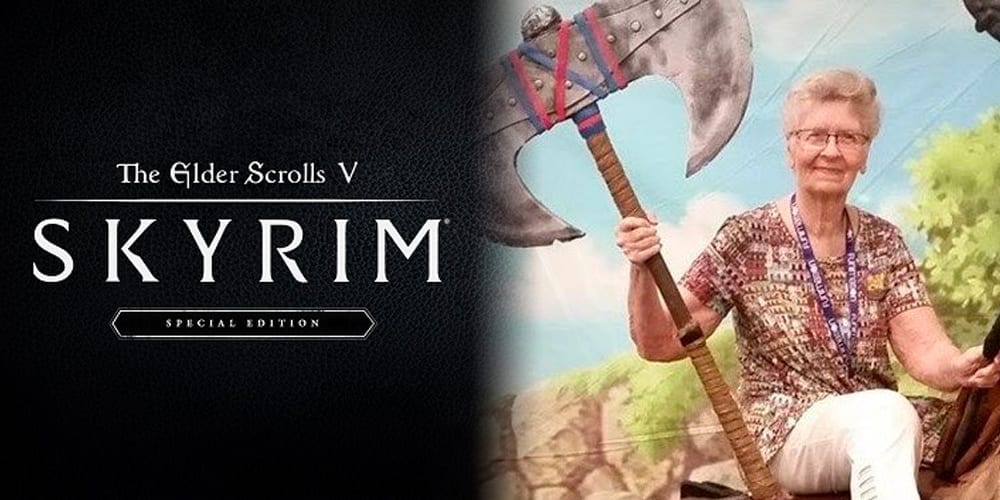 Fans of the Elder Scrolls series will have no doubt discovered the worldwide YouTube star known as ‘The Skyrim Grandma’. 83-year-old Shirley Curry from Ohio, USA, now has over 800,000 YouTube subscribers and regularly posts her gameplay videos from the ever-popular game The Elder Scrolls V: Skyrim.

Grandma Shirley has become so popular that she now has her own mod in the game which allows your character to be followed by Shirley and have her as your companion. The Skyrim Grandma will also be appearing as an NPC character in the Elder Scrolls 6, whenever that is released.

As a special birthday gift to all her fans, Shirley has decided to upload a ton of new gameplay videos to celebrate her birthday and allow her to take a well deserved day off from streaming. In a recent video on her YouTube channel, she described how she:

“Thought I’d give you several videos to watch as a birthday present from me to you!! :)”

Shirley first rose to fame when large numbers of Skyrim fans were surprised to see such an older person playing the game on YouTube. Many people were surprised at Shirley’s high ability level and expertise with the Skyrim game and wider lore. Shirly has now made over 1000 videos chronicling her journey through the Skyrim world.

Her quest to become a cult legend started when she was given an old computer from her grandson. Shirley’s journey into the world of gaming began when she discovered the classic game Sid Meier’s Civilization 2. Her passion for the world-famous simulation game made her realize she had a talent for gaming. She then progressed into the world of Skyrim and immediately found herself enjoying the freedom the open-world game offered her. Shirey would often watch other play through the game on YouTube and decided to join them by making her own channel. Since creating said channel, her popularity has grown vastly and she embraces this, even having her own fan group called ‘The Skyrim Grandkids.’

Shirley’s unique rise to YouTube fame is one to be admired. Her adorable and passive approach to game streaming makes her one of the most well-known video game streamers in the world right now and her birthday will no doubt be celebrated by Skyrim Grandkids worldwide.