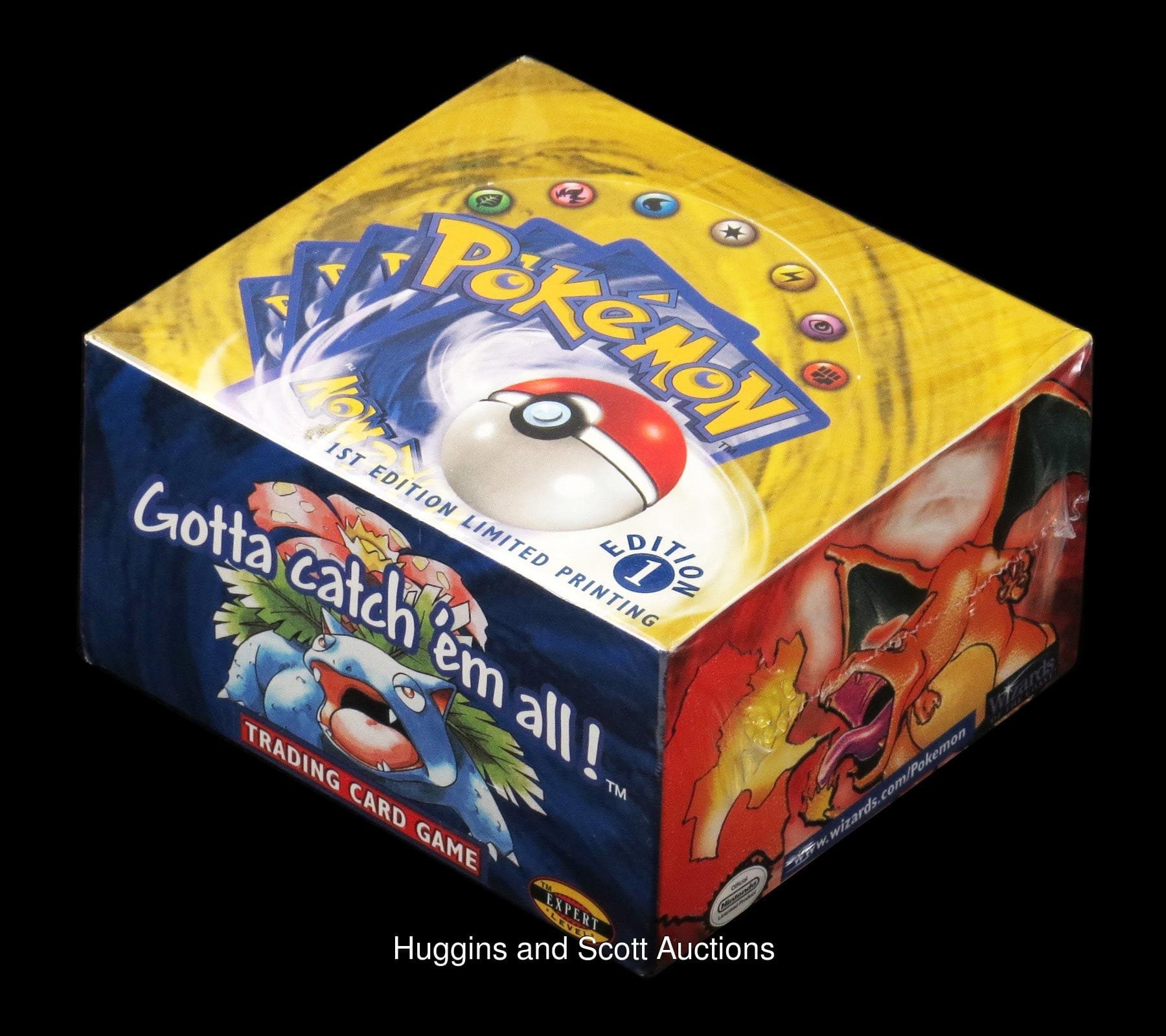 If you were a kid in the 1990s then you were definitely a part of the Pokemon card hype. Unlike other fads of the 90s/early 2000s though (looking at you, Beanie Babies), Pokemon cards are actually worth a lot of money. If you’ve got the right ones.

Auctioneers Huggins and Scott are currently selling an unopened box of the original cards for a jaw-dropping $35,000.

The auction description states: “On the heels of our record setting August 2018 auction of the 1999 Pokémon 1st Edition Limited Printing (English) Base Set unopened booster box which sold for $66,920, Huggins & Scott Auctions has positioned itself as the “go to” auction house for transcendent material relating to the the anime franchise…

“This tightly sealed and virtually untouched container has been in the possession of our consignor since release decades ago. A box break will yield (36) 11-card packs. Additionally, each pack will deliver: (5) common, (3) uncommon, (2) Energy and (1) Rare or Foil card. Based on production, the odds of pulling a foil card are nearly 1:3 packs. With 396 chances for Gem Mint 10 holos and other high-grade treasures, ‘the sky’s the limit’ for this cornerstone!”

If you want to place a bid, there’s still time, and judging from some recent eBay completed sales, you might be making a solid investment.

On eBay, someone recently paid an eye-watering $40,000 for 11 unopened and heavy 1st edition shadowless base set booster packs. (Note, someone bought this. It’s not someone listing it and getting no interest. Someone actually bought this.)

Now, depending on your financial situation, this could have turned out to be a pretty worthy investment, if you’ve got the $40k to start with and you don’t mind taking a serious gamble.

Being “heavy” packs mean they’ve been specifically weighed and pretty much guaranteed to include a rare shiny card. If one of these turned out to be, say, a first edition Charizard then you could easily sell this for around $5,000, going off the most recent eBay sales.

With 11 packs, your chances of pulling Charizard are pretty good, and even if you pull a lesser-sought-after Pokemon, there’s still a chance you’d make your money back. If you’re lucky.

First Edition and mint condition shiny shadowless cards including Blastoise have recently sold on eBay for over $1000, whereas the same condition Chansey and Poliwrath also recently sold for around $300/$400 dollars.

Unopened single packs of the original cards are currently selling for around $100 if you’re lucky.

As for your average job lot? You can find some decent bargains out there, but you’re almost definitely not going to get any particularly decent cards.

Now, don’t expect your old cards dug out from the attic to automatically pay off your student loan. The price you can successfully sell your cards for depends highly on the rating it’s given for quality by places like PSA.

“GEM-MT 10: Gem Mint
A PSA Gem Mint 10 card is a virtually perfect card. Attributes include four perfectly sharp corners, sharp focus and full original gloss. A PSA Gem Mint 10 card must be free of staining of any kind, but an allowance may be made for a slight printing imperfection, if it doesn’t impair the overall appeal of the card. The image must be centered on the card within a tolerance not to exceed approximately 55/45 to 60/40 percent on the front, and 75/25 percent on the reverse.

“MINT 9: Mint
A PSA Mint 9 is a superb condition card that exhibits only one of the following minor flaws: a very slight wax stain on reverse, a minor printing imperfection or slightly off-white borders. Centering must be approximately 60/40 to 65/35 or better on the front and 90/10 or better on the reverse.

“NM-MT 8: Near Mint-Mint
A PSA NM-MT 8 is a super high-end card that appears Mint 9 at first glance, but upon closer inspection, the card can exhibit the following: a very slight wax stain on reverse, slightest fraying at one or two corners, a minor printing imperfection, and/or slightly off-white borders. Centering must be approximately 65/35 to 70/30 or better on the front and 90/10 or better on the reverse.”

See? There’s a lot more to these cards nowadays. If you do happen to have some ’90s shiny cards and the time to check their value, you could be sitting on a cash cow. Or a cash Blastoise…