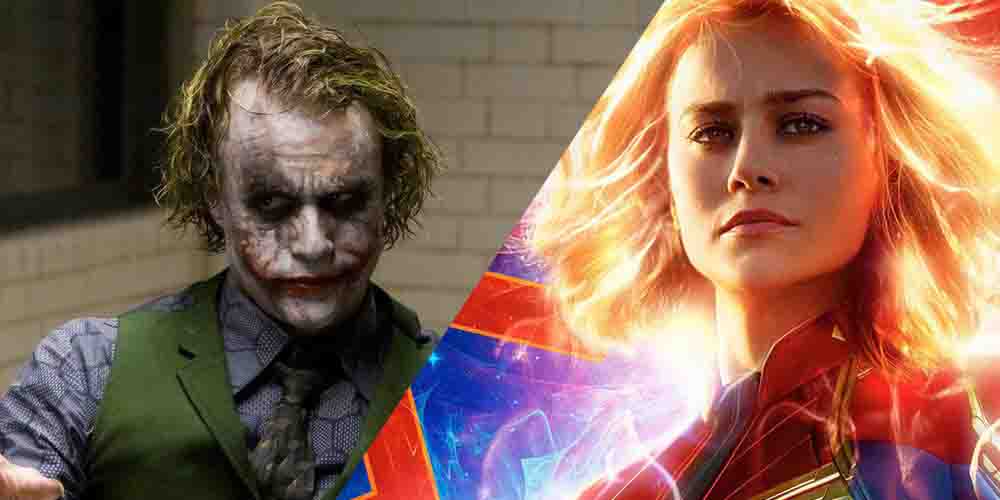 The Dark Knight was the second in Nolan’s Batman-centric trilogy and famously cast Heath Ledger as the Joker. Although the movie was a critical and commercial hit, the 2008 movie took a toll on Ledger and was thought to be a contributing factor in his death before The Dark Knight‘s release.

According to Box Office Mojo, Captain Marvel has hit $1.037 billion at the worldwide box office and has passed The Dark Knight‘s $1.004 billion (unadjusted for inflation). As Boden and Fleck’s movie keeps on climbing, it looks like the Brie Larson-led caper could pass The Dark Knight Rises $1.084 billion. Currently, Captain Marvel is the tenth highest-grossing superhero movie of all time.

Ahead of Captain Marvel are the likes of Aquaman, Captain America Civil War, Incredibles 2, and the first three Avengers movies. It may be great news for Captain Marvel, but let’s look at the facts on The Dark Knight.

Nolan’s movie didn’t release in China, where Captain Marvel earned an impressive $151 million. Also, The Dark Knight made a supersized $533 million in the USA compared to Captain Marvel‘s $374 million.

Captain Marvel‘s impressive haul is a move in the right direction when considering Larson is set to be the new face of the MCU. Tied into a seven-movie contract, Carol Danvers officially joins the fold of the Avengers for Avengers: Endgame. It’s also important to remember that Captain Marvelonly scratched the surface of what Danvers can do.

While Captain Marvel is sitting pretty for now, it could be knocked out of the Top 10 in a matter of weeks. Box office predictions point to the Russo Brothers’ Avengers: Endgame being the biggest movie of all time. Well, that should help recoup some of the estimated $1 billion budget spent on Avengers: Infinity War and Avengers: Endgame.

I enjoyed Captain Marvel a lot, but let’s be honest here, is it really better than The Dark Knight? From Christian Bale’s brooding Batman to Ledger’s unhinged Mr. J, Gary Oldman’s moustachioed Jim Gordon to Aaron Eckhart’s tragic Harvey Dent, there is so much to love in Nolan’s masterpiece.

Sure, Captain Marvel has Samuel L. Jackson at his very best, but you can’t compare the two.