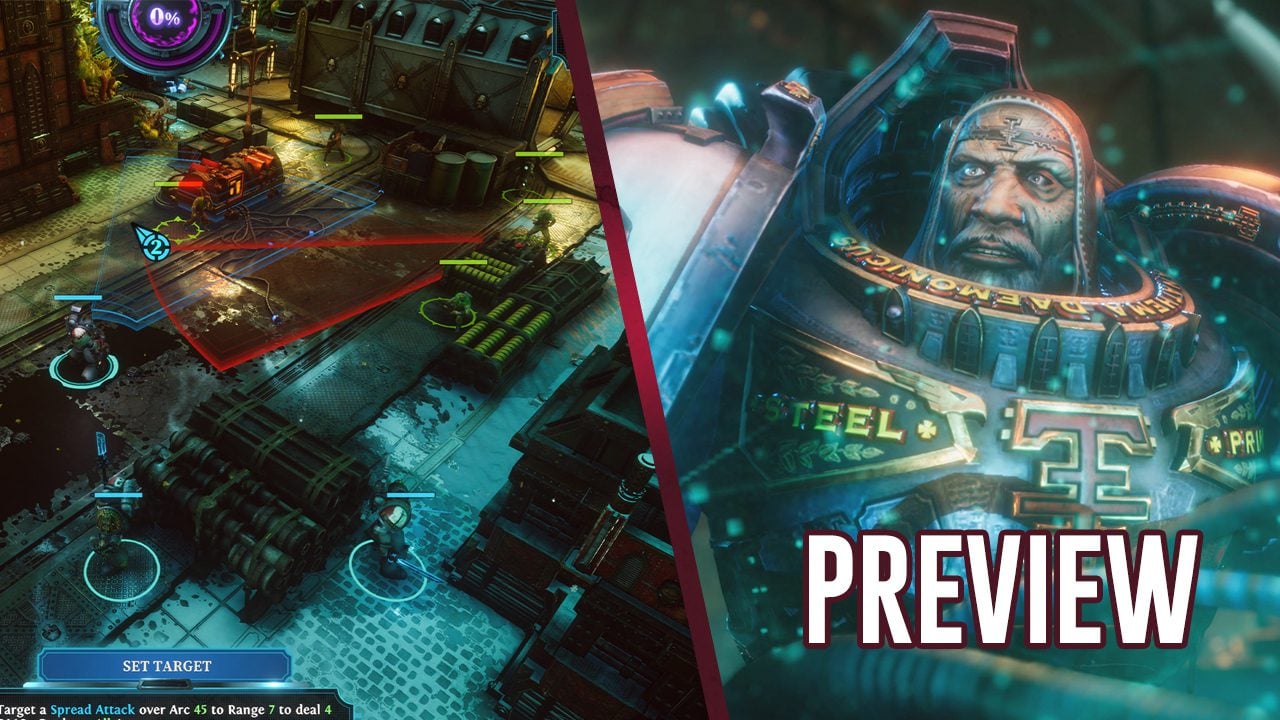 Looking for a Daemonhunters Preview? Thanks to Complex Games and Frontier Foundry, GameByte was able to get hands-on with Warhammer 40,000 Chaos Gate – Daemonhunters before its release on 5th May 2022. For those who haven’t kept up with the series, it’s understandable considering the last Chaos Gate title was released just over 26 years ago.

Read our interview with Noah Decter-Jackson, the CEO, Creative Director and Co-Founder of Complex Games, here.

Serving as a reboot to 1998s Warhammer 40,000 Chaos Gate, Daemonhunters follows the exploits of the Grey Knights, a faction of Space Marines, going up against the Chaos legion Nurgle. The Nurgle are practically a plague, using the demonic powers of Chaos to unleash ‘The Bloom’ on the grimdark galaxy we all know and love. This is the basis of the full release also.

This is a big opportunity for creative director Noah Decter-Jackson and the team at Complex Games. By changing direction in 2015 with another Warhammer 40K title ‘The Horus Heresy: Drop Assault’, the studio started to move away from their mobile and browser game roots of developing licenced games for the likes of Disney and Nickelodeon.

The future of Complex was destined for the 40K universe, with Noah Decter Jackson and Complex pitching a new idea for the franchise after the success of Drop Assault and leading to Warhammer 40,000 Chaos Gate – Daemon Hunters.

The preview kicked off with a quick tutorial that throws players straight into the fray. It highlighted Daemonhunters’ strong focus on tabletop-friendly movement and hit phases quite well. Fans of the tabletop game should find the transition into Daemonhunters subtle, with changes only make to enhance gameplay and combat pacing.

As I’m sure we’ve all guessed by now, this game is a squad turn-based RPG where players will assume the role of a Grey Knight squad. In the tutorial, we see the Grey Knights working with Commander Agravain to eliminate a Khornate cult.

Seeing each member of the Squad having their own role was a delight to see and is also relevant to the 40K tabletop. Technomancer, heavy ranged weapons, assault troops and more all have their own relevant skills and effects. For example, a Technomancer is full of buffs and healing abilities to keep the rest of the squad protected and buffed up when needed.

The Grey Knights reside on the Baleful Edict and serve as a mobile base of operations. For players, this is the customisation and strategy hub where they will create the best Grey Knight builds for their next mission.

Players can customise each Grey knight including weapons, abilities and more. Many of these are unique to each class and should be considered carefully when figuring out a team’s overall strategy, much like the tabletop.

For those looking for some chunky lore content, players can make their way to The Libris Malleus and Inquisitor Vakir’s research into the Bloom. There are also opportunities to work on the Baleful Edict and learn more about the Grand Manufactorum too.

Strategy is a big part of Daemonhunters as is knowing Grey Squads’ strengths and weaknesses too, and the tutorial highlights this perfectly. Area of effect attacks and setting up ranged troops to automatically fire as enemy forces move into a predetermined range of fire is just the tip of the iceberg when it comes to available strategies.

We were treated to three missions in total which showcased the various situations players will find themselves in whilst fighting off The Bloom and the forces of Nurgle. Here’s a summary of each one:

Following a brutal Ultramarine assault aimed at controlling the spread of Bloom seeds, the Grey Knights are dispatched to bring Nurgle under control. The main strategy here was keeping our Technomancer out of the firefight in order to heal the squad whilst pressing onto key points on the map the secure Bloom seeds. This also demonstrated interactive environment elements such as using crumbling pillars to take out multiple Nurgle, fire pits and plasma generators.

Seek and Destroy the Bloomspawn

The legion of Nurgle has taken hold of a manufactorum thanks to Bloomspawn that is rooted deep within this mission’s map. The idea here was to buff Grey Knights with the Quicksilver stratagem which gives them +2 attack points. This allowed the Knights to deal extra damage and clear out any Bloomspawn and Nurgle that were occupying key areas.

The main issue with Bloomspawn is larger variants can spawn smaller ones whilst healing and buffing Nurgle allies. It was also possible to encounter a Myphitic Blight Hauler, a corrupted engine of Chaos able to rain artillery fire from a long range at a player’s Grey Knights. Critical hits on the machine are key to a player’s success.

Daemonhunters serve as the boss fights in Warhammer 40,000 Chaos Gate – Daemonhunters. Aeger the Benevolent was shown off in our hands-on preview, and he is responsible for spreading the Poxus strain of the Bloom.

Players will need to juggle enemies and strategies as they take on Aeger alongside the hordes of Nurglings and Plaguebearers. Whilst the Nurglings will sacrifice themselves to heal Aeger, the Plaguebearers will poison our Grey Knights.

The best way to take care of this boss fight was to take out the Nurgling dens and use Mass purification. This purifies any afflictions and gains +2 HP, giving the Grey Knights enough wiggle room to take on multiple enemies whilst switching priorities turn to turn.

All in all, Warhammer 40,000 Chaos Gate – Daemonhunters is looking great. For fans of the franchise or RTS fans looking for a different universe to dive into, Daemonhunters has strategy and customisation in bags.

It’s important to note that the build we played was not final and some of the experiences we’re writing about today may be subject to change and additional development before the game’s launch on May 5th.