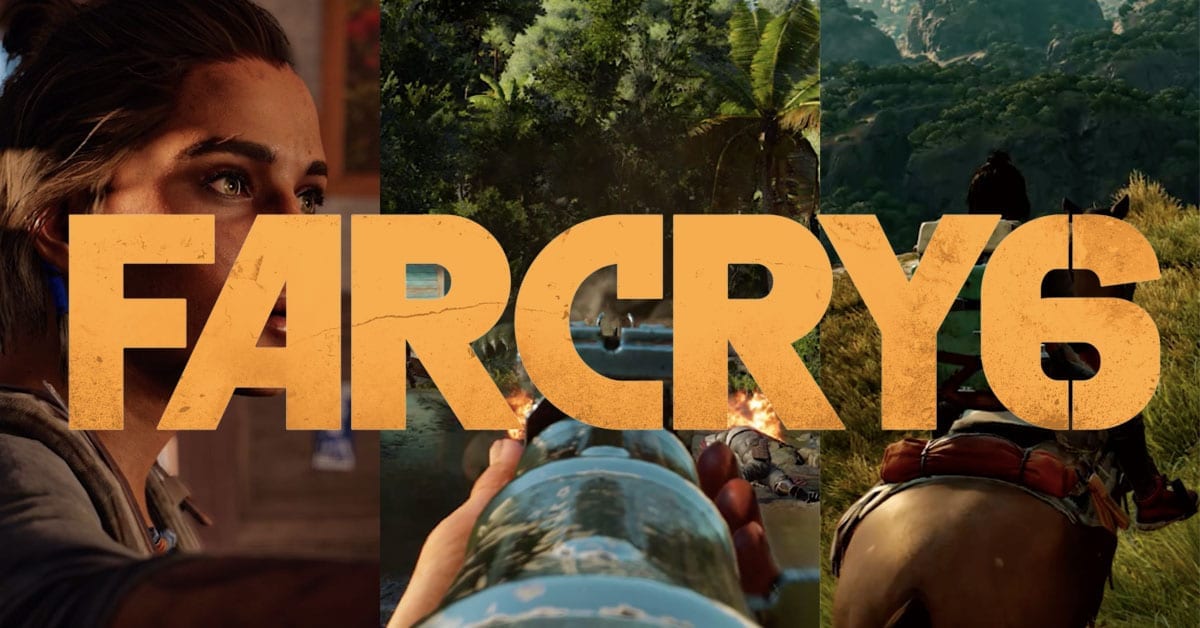 Gamers the world over are patiently waiting for the release of Ubisoft’s next AAA gun-toting slaughter-fest, Far Cry 6. Announced to the world back in 2020 and delayed from its original February 2021 release date, the hype for Far Cry 6 is building, and GameByte was treated to a hands-off preview, courtesy of Ubisoft.

Before most of the world got to see Far Cry 6 in action, we got to see just what we can expect from the next addition to the franchise. The game is shaping up to be one of Ubisoft’s most ambitious titles to date, but we have some concerns…

The new Far Cry game will see players “liberate your nation” from the tyrannical ruler of Yara, Antón Castillo. Played by Breaking Bad and The Mandalorian star, Giancarlo Esposito, Castillo is already shaping up to be more than enough of a villain for the Far Cry series as you try to end his rule. The story will feature Castillo and his young son Diego, whose reign must be stopped by lone guerrilla, Dani Rojas.

As Ubisoft explains: “Far Cry 6 gives players unprecedented freedom to experience the game the way they want by supporting their playstyle, whether they prefer a stealthy or forceful approach. In addition to resolver options, players will be able to pick traditional weapons and use new ways to traverse the world such as horses, tanks and crazy DIY vehicles. They will also be able to pair up with all-new animal companions like Chorizo, the adorable wiener dog no soldier can ignore or Guapo, Juan’s soldier-hungry pet crocodile.

“In solo or two-player co-op, players will explore a vast and contrasted open world, from lush jungles to decaying cities. With Antón’s army controlling the air, roads, and seas, players will operate from hidden guerrilla camps across the country, gathering soldiers and resources while planning their next move. Players will have to navigate the world and approach situations like true guerrilla fighters to make sure every strike against the regime hits hard.“

Sadly, we saw nothing of the dictator in our time with the preview. Hopefully this means Ubisoft is holding onto its trump card with a gritty story and memorable narrative to come. For now, we still don’t know.

Cranking Up The Volume

The most notable thing from our time viewing Far Cry 6 was just how madcap and chaotic the whole thing looks. Far Cry has seen some changes over the years, but the sixth mainline installment is looking to take the zaniness of the later games and crank up the volume.

When we weren’t watching raging fires sweep through our enemies, we were watching showers of bullets rain down on them. If you thought Far Cry 5 didn’t have enough balls-to-the-wall explosive action, Far Cry 6 is here to rectify that. The preview also showed us everything from an attack-crocodile and a dachshund in a wheelchair, to a range of OP weapons and bizarre vehicles including tanks. We learned that, yes, this is going to be a ruthless, relentless and ridiculous game.

The violence and chaos we saw was tempered with slices of peace and quiet: a slow walk down winding pathways shaded from the scorching sun and lined with tropical trees; an NPC resting by a waterfall; a horseride through the hills. Far Cry 6 looks set to be the most beautiful game in the series, but these glimpses into the simplicity and joy of island living stand in direct contradiction to the all-out warfare shown throughout the rest of the preview.

It’s hard to put into words the sheer mayhem and havoc that Far Cry 6 exudes at the moment, and I’m definitely excited to see the final game – especially if players will have the ability to explore the quiet beauty of the world, as well as engage in guerrilla warfare.

What we learned: Weapons

Far Cry 6 will of course allow for the stealth the series is known for, but if you want to take out settlements and camps, you can always go in all-guns-blazing. The game seems to feature a wider variety of weapons than your typical Far Cry experience, with a focus on customisation to make your ideal set-up. As Ubisoft explains, this is all down to the “resolver” spirit, a “philosophy of resourcefulness found across Yara, making use of everything and whatever they have to inflict chaos on the regime“. This can include everything from a motorcycle engine-powered minigun to a homing missile-throwing backpack. Yeah, there’s a lot of madcap options on offer here.

Far Cry 6’s weapons are a perfect example of just how weird and wonderful the game is shaping up to be. During the preview, we got to see customised nail guns, armour-piercing bullets, and even a gun complete with…a CD player? We saw the playable character take out a host of enemies using a weapon which played The Macarena, with the song even skipping slightly as each bullet was fired. If you’re looking for a gritty and realistic Far Cry experience, 6 doesn’t really look like that in terms of gameplay, but it sure looks fun as all hell.

What we learned: Characters

Far Cry 6’s playable character is Dani Rojas, a military drop-out with the option to select either a male or female version of the hero. Your character is a sole guerrilla tasked with taking out endless enemies as you try to find peace for the fictional island of Yara. While this might usually be a job for a whole army, Ubisoft stressed that it’s all down to you, despite it being all-out guerrilla warfare.

Although Yara’s fate lies in your hands, you’ll have some comrades to rely on. Clara Garcia, the leader of revolutionary group Libertad, and Juan Cortez, a “jaded ex-KGB spy and guerrilla master” are on your side throughout the journey.

As mentioned, we didn’t get to see any of the tyrant Castillo, so his role in the game (and a look at his character model outside of the cinematic trailer) is still shrouded in mystery for the moment.

What we learned: Yara

Gameplay shown off during the event revealed a dynamic and thriving world setting for Yara, all of which is your playground. As you might expect from a Far Cry game, there’s seemingly a fair few different types of environments to explore, from towns and camps in the baking sun, to tropical jungles and forestry. Ubisoft describes the world as a “tropical paradise frozen in time in the heart of the Caribbean“.

The preview event wasn’t shy about highlighting just how detailed and gorgeous the world design is. The gameplay was captured in-engine (PC), and I’m hopeful that on new-gen hardware, the world of Yara will feel almost alive. From its waterfalls to its beaches, Far Cry 6 is going to be a dream come true for video game photographers thanks to its incredible colour and vibrancy. It’s tentatively looking like the environments will really show off what new-gen consoles are capable of, complete with the heart and soul we’re used to seeing from Ubisoft’s open worlds.

Travelling around the show-stopping environments will feature the typical array of vehicles we’re used to seeing in Far Cry, but we’ll also get to travel on horseback, which should definitely be a fun way to explore the world.

The preview also showed off some “hidden paths” which can be used to travel safely. The paths will serve as a sort of “underground” network, albeit one above the ground. One interesting tidbit from the event is that if you’re travelling and looking to avoid suspicion, hiding your weapons is a must! Gotta love that realism.

What we learned: Allies

As we’ve already seen, Far Cry 6 will feature a dachshund in a wheelchair. Chorizo is your friend and ally, and can be sent out to distract your enemies for a full-stealth takedown. You’ll also be befriending a crocodile named Guapo, who you can sic on your foes for a grisly and gruesome death. Both seem to be pretty useful if you’re looking to play tactically, but one is definitely cuter than the other.

What Did We Think Of Far Cry 6?

Stepping away from the bedlam and brutality of combat, I was definitely impressed with how Far Cry 6 is looking. However, its silliness in gameplay seems to directly contradict the very serious cinematic trailer shown off at the game’s first reveal.

Comparing the preview gameplay we got to see with the Far Cry 6 reveal trailer, I was left a little puzzled. While Far Cry 6 looks like a wild ride of death and destruction, it seems almost too bizarre and hammy to address some of the serious and dark narrative overtones that have been previously teased. It’ll be interesting to see how this tonal dichotomy is addressed within the final product.

It’s worth remembering that, in terms of Castillo and the relationship with his son Diego, the Far Cry 6 preview event gave nothing away. The series has a long history of starring caricature villains, but Castillo looks to be much more serious than the likes of Vaas or Pagan Min. How the game will handle its story and its darker characters remains to be seen.

Our preview of Far Cry 6 showed off a world in which fun is the main objective, while the story itself has been teased as an emotional rollercoaster centered on a tyrannical leader and his son. How exactly the final product will marry these two ideas is anyone’s guess, but if you were expecting a serious Far Cry game, the preview shows that 6 is having too much fun with its own silliness to be that. A veritable feast of death and destruction is on the menu with Far Cry 6 – let’s just hope it has an explosive story to match!

Far Cry 6 will release on 7th October worldwide on Xbox Series X|S, Xbox One, PlayStation 5, PlayStation 4, Stadia, Amazon Luna and for Windows PC (exclusively on both the Epic Games Store and the Ubisoft Store).

Are you looking forward to Far Cry 6? Let us know across our social media channels!