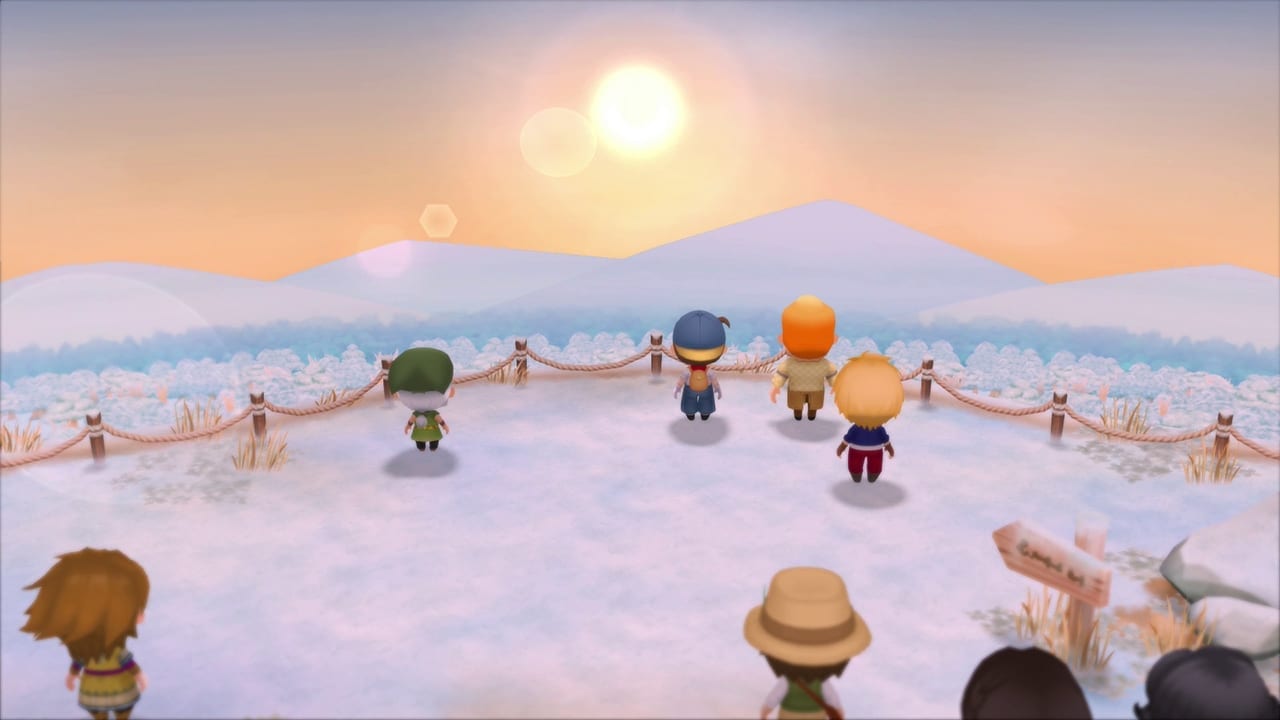 Rejoice, farming sim fans! The series that started it all is back. Packed with brand new features alongside all the returning favourites.

Story of Seasons: Friends of Mineral Town is a 2020 remake of the original Game Boy Advance game that was released in 2003, which came out prior to the series changing its name.

Whether you’re a die-hard friend of Mineral Town or just a curious newcomer to the series, this game caters to everyone. If you loved the original game, this remake is incredibly faithful. It has all the beloved features of the series that fill us with nostalgia, like the beautiful music, the Harvest Goddess, Nature Sprites (formerly known as Harvest Sprites) and, most importantly, Spa-boiled eggs!

If you’re a newcomer and those words mean nothing to you, never fear. The game perfectly manages a balance of guiding you through your first days and making the world of Mineral Town feel open and rich to explore.

What’s Unique About The Remake Of Friends Of Mineral Town?

The game doesn’t rely on nostalgia – it’s a great game in its own right. The brand-new features and quality-of-life updates, like inventory stacking and menu saving, keep the game feeling fresh and innovative. You can look forward to things like the ability to ride a horse anywhere, new pets, new marriage candidates (more on that in a second) and the addition of ALPACAS AND ANGORA BUNNIES to your adorable roster of farm animals.

The graphics of Story of Seasons: Friends of Mineral Town have had a substantial upgrade since 2003, as you would expect. The bright primary colours, the charming 3D character models and the anime-style avatar sketches of all the villagers work together to create a uniquely charming experience that hooks from the moment you step foot on your overgrown farm.

Not to mention, of course, the cows. Look at them. They’re more than enough reason to get this game.

Your job is to get your newly-inherited farm up and running. You can do this by raising livestock, tending to crops and selling your plants. There’s also crafting, fishing and cooking for players to get stuck into, as well as some community events to enjoy with your new neighbours!

If you’re worried about how long it’ll take you to set up your farm, there’s no need to panic. Time passes in the game quicker than in real life – 10 minutes in-game equates to about 5 seconds out-of-game. So it’s very easy to get carried away and sink hours into bringing your farm to life and caring for your livestock without realising!

Story of Seasons: Friends of Mineral Town also has different seasons, which dictate which crops you can grow. It’s important to remember that the seasons don’t last forever. You’ll need to time how long it takes some crops to grow, with how much time you have left in the season. The last thing you want is a bunch of spoiled potatoes!

You might be thinking ‘well no crops grow in Winter, so what is there for me to do?’ The answer is, ‘plenty!’ In the Winter season, you’ll be able to access the Hidden cave, which I won’t spoil, but it is a great thing to keep you busy.

You’ll also be able to hone your mining skills in the caves – make sure to hold on to any ores you find because they’ll be very useful for upgrading your tools!

Story of Seasons: Friends of Mineral Town encourages players to find love in the game’s various townsfolk. Each character has their own personality, likes and dislikes and it’s your job to win their heart! What’s really impressive is the fact that in a first for the series, same-sex marriage has been allowed in the Western release. The remake includes a ‘romantic affinity indicator’, which will let you know who you can set your eyes on. Although, if it’s not Jennifer or Brandon, two brand-new marriage candidates for the remake, you’re wrong.

Some fans of the older game might pause at the news of changes. Don’t worry! Even though the names and dialogue of some characters might have changed (best boy Won is now called Huang, for example), they’re still the characters we know and love.

Story of Seasons: Friends of Mineral Town releases on Nintendo Switch on 10th July 2020 and PC on July 14th 2020. Wishlist it here.

Part of a sponsored article between GameByte and Marvelous Inc.