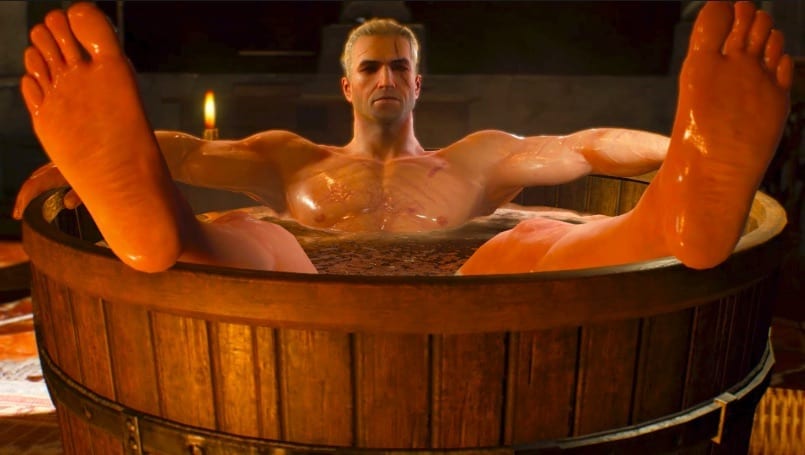 While the whole world falls over for CD Projekt Red’s new RPG, Cyberpunk 2077, we’re taking a moment to appreciate one of the developer’s other big releases, the unstoppable The Witcher 3: Wild Hunt. Originally released back in 2015, The Witcher 3 has become one of the most successful video games of all time, releasing on basically every platform imaginable since it first hit store shelves. Though the game is an icon in its own right (and although we could talk about it until the cows come home), there’s one scene in particular that we’d like to celebrate today. I am, of course, talking about the “Geralt bathtub scene,” from the very beginning of The Witcher 3.

“What the heck are you talking about?”

If you haven’t played The Witcher 3 on PC, PS4, Xbox One or Nintendo Switch, and if you haven’t seen the Netflix series, you probably have no idea what I’m talking about.

Keeping things somewhat spoiler-free, The Witcher 3 kicks off with a brief rundown of current-world events, including the war fuelled by Emperor Emhyr. After a series of dramatic cinematics, we’re dropped into the first in-game cutscene.

In stark contrast to the sweeping music and heart-thumping action of the previous scenes, we’re met with our hero Geralt getting some well-needed relaxation in by soaking his weary bones in a steaming tub.

In the years since it first launched, the “Geralt bathtub scene” has become synonymous with The Witcher. Not only is it infamous for the players, but it’s also transcended the video games, becoming a statue, a Nendoroid figure and even being recreated for the Netflix series.

The scene opens with a shot of a cozy fire burning away at the Witcher keep, Kaer Morhen. Contrasted against the previous scene, we’re safe, warm and somewhat oblivious to the perils awaiting us on our upcoming adventure (although note that this scene takes place before the main events of The Witcher 3 and is a flashback of sorts).

As mentioned, Geralt is soaking in a wooden tub filled to the brim with steaming hot water. We’re treated to a foot shot, which I’m not going to go into (if that’s your jam, cool), before we get the now-famous and somewhat-tasteful spread-eagled shot of Geralt, whose junk is concealed by the tub’s water. It’s a nice in-joke for longstanding fans of the series, who’ll note the reference to the running joke that Witchers never bathe.

Our hero lies back, giving us a nice shot at his stylish ponytail (I’m talking about his hair here, you heathens). We’re then blessed with another shot of his feet, before the peaceful image is disrupted by a scuttling creature, making its way into the bath. This isn’t the intro to an epic battle though. Geralt – after seemingly being bitten by the spider-crustacean-thing – simply removes it from the water, turns to someone off-screen and says: “You know I don’t find that amusing.”

It’s here, as the camera switches angles to reveal the naked form of Yennefer of Vengerberg, that we come to learn the creature isn’t a threat but instead an illusion created by the enchantress to tease her beau and get him out of the tub in order to train with Ciri.

Geralt rises from the tub and we see the countless scars marring his body, which tell of his endless battles and close-calls with death. Again, in contrast to the lilting music and the cozy candlelight of the scene, we’re reminded that this is not a game of peace of love. The duo share a passionate kiss, and finally, we take control of Geralt and head out to find Ciri.

That’s the scene, but why is it so iconic?

WHAT DOES THE GERALT BATHTUB SCENE IN THE WITCHER 3 REALLY MEAN?

There are lots of reasons why the “Geralt bathtub scene” has remained in the minds of gamers (and Netflix fans) even now, so many years after the game’s launch – and it goes a lot deeper than partial nudity.

First up, you have the juxtaposition of the previous scenes in the game. Booting up The Witcher 3 will first fling you into a war-torn world with no respite for its citizens. Threat is looming everywhere, which is only further driven home with the epic and movie-like cinematic of battle.

Where most games would immediately throw the player into the fight, The Witcher 3 subverts expectation by cutting to the warmth and safety of Kaer Morhen. Instead of combat, we see an intimate moment of intense vulnerability from our hero Geralt, naked in the bath.

When we see the creature enter the bathtub, our expectations are once again subverted, as this isn’t a threat but instead a playful tease from Yen. We’re also treated to a wonderfully romantic moment between the two, heightened with a sexual passion thanks to the duo’s shared nudity.

From its marketing and from its opening scenes, the Witcher 3: Wild Hunt isn’t a game which – by rights – should have these intimate moments of comfort, safety and security. However, it does. And in kicking off the game in this way, we’re not only instantly humanising Geralt, but we’re also being handed a reason for the events we’ll see unfold in the game.

Geralt, underneath his scars and battle skills, seeks security and love over anything else. It’s the reason he tries to stay out of the affairs of war, the reason why he fiercely protects his loved ones, and the reason why we all adore his character much more in this game than its predecessors.

While it’s easy to dismiss The Witcher 3’s “Geralt bathtub scene” as sexy memes, it’s hard to deny that the cutscene is a masterclass in both character exposition and storytelling. The scene is memorable for many more reasons than just nudity (though it’s definitely a bold move to kick off your game with naked feet and Yen’s butt). The moment was (partially) reenacted in season one of Netflix’s The Witcher, with actor Henry Cavill famously saying he did attempt to show his feet, but that the size of the tub was a problem.

The “Geralt bathtub scene” will forever remain one of the most iconic scenes in video games, and while we’re sure video games like Cyberpunk 2077 will have their moments, it’s hard to imagine we’ll see the same legacy…unless we get Keanu Reeves in a bathtub?

10/10. We love the Geralt bathtub scene in The Witcher 3: Wild Hunt. Hands-down the best thing from CD Projekt Red.