The first full trailer for the upcoming Monster Hunter movie has been released and gamers aren’t thrilled with the latest offering from Paul W. S Anderson.

The movie is reportedly “loosely” based on the iconic Monster Hunter games, but from the trailer, fans are really struggling to see the connection between the next epic action starring Milla Jovovich, and the classic Capcom franchise.

Plenty of people have already deemed the movie a flop – despite it not yet even having released.

While criticism of the script and style of the movie is rife, another viral tweet has questioned Anderson’s past directorial choices, referencing a previous movie of his during which a stunt double was seriously harmed.

Not everyone was disappointed with the offering though, with many people praising the trailer for embracing the true essence of cheesy action goodness.

“Sure it doesn’t look THAT much like the games but it looks like stupid action fun. I’m in,” said GameByte’s own Brett Claxton (who asked me to include his take in this article).

In case you missed it, the movie’s official description reads as follows: “Behind our world, there is another: a world of dangerous and powerful monsters that rule their domain with deadly ferocity.

“When an unexpected sandstorm transports Captain Artemis (Milla Jovovich) and her unit (TI Harris, Meagan Good, Diego Boneta) to a new world, the soldiers are shocked to discover that this hostile and unknown environment is home to enormous and terrifying monsters immune to their firepower.

“In their desperate battle for survival, the unit encounters the mysterious Hunter (Tony Jaa), whose unique skills allow him to stay one step ahead of the powerful creatures. As Artemis and Hunter slowly build trust, she discovers that he is part of a team led by the Admiral (Ron Perlman). Facing a danger so great it could threaten to destroy their world, the brave warriors combine their unique abilities to band together for the ultimate showdown.”

Sitting at a ratio of 21,000 Likes to 14,000 Dislikes on YouTube (at the time of writing), the trailer has definitely divided fans. Check it out below! 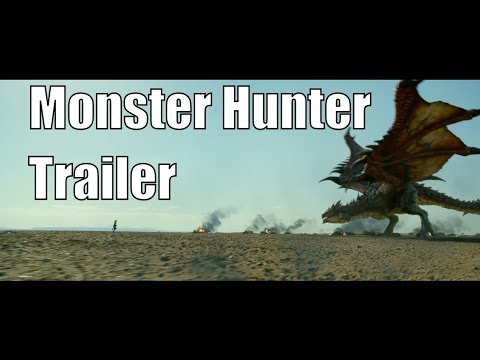 Were you impressed with the Monster Hunter movie trailer? Let us know on Twitter!