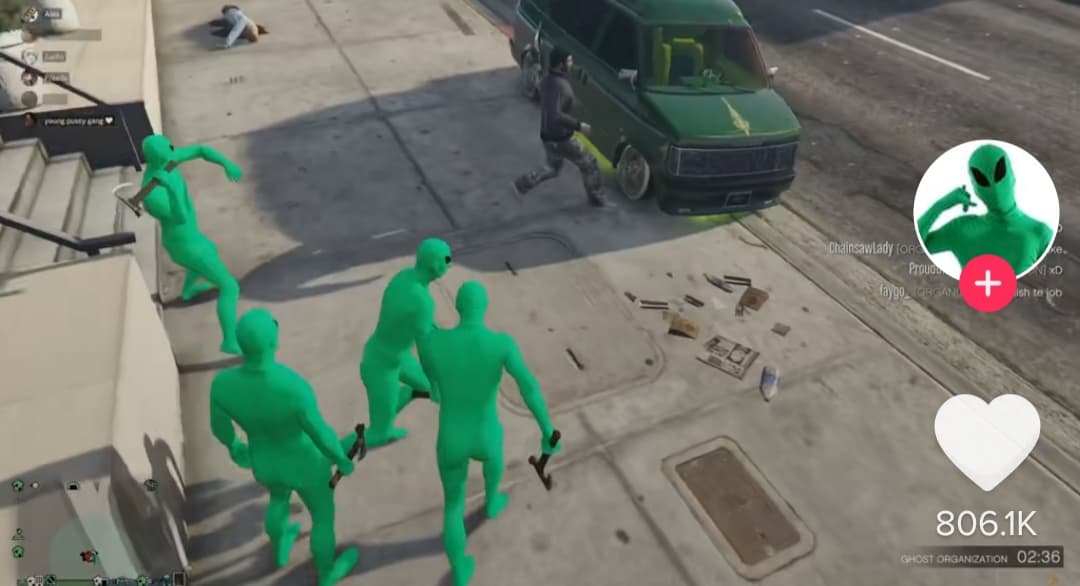 A group – or gang, I suppose – of “aliens” have invaded Grand Theft Auto Online, harassing people as they go about their GTA business. The gang, who appear primarily on TikTok, seemingly identify as aliens, wearing lime green bodysuits and carrying a series of weapons with which to take down their foes.

The TikTok series (because yes, it’s a series) comes courtesy of TikTok account some.alien.sh*t, who is now regularly posting the “invasions” of GTA Online.

A number of the gang’s exploits have now made their way to Reddit [via PCGamer], where the aliens can be seen brutally attacking everyone and anyone they see. It’s a video game though, and it’s actually really funny and definitely not weird at all.

In the video below, you can see the crew hiding in wait for an innocent shopper before beating them to a pulp and hopping off in the bright green van as a getaway vehicle.

They strike again from r/gtaonline

The next video shows the gang failing a mission – in spectacular style. Check it out below.

Mission failed, we’ll get em next time! from r/gtaonline

It’s nice to see that, even in the toughest times, people are still making the most out of their lime green lycra.

Check out more from the alien invasion over on TikTok, posted by some.alien.sh*t (without the asterisk, I have to put that in there, sorry).

The description from Rockstar Games reads as follows: “Help Gerald score big while ensuring his drug-dealing and other criminal endeavors go smoothly across Los santos. Play solo or co-op as you battle rival gangs and stay one step ahead of the law in this brand-new series of Contact Missions.”

Just watch out for aliens!