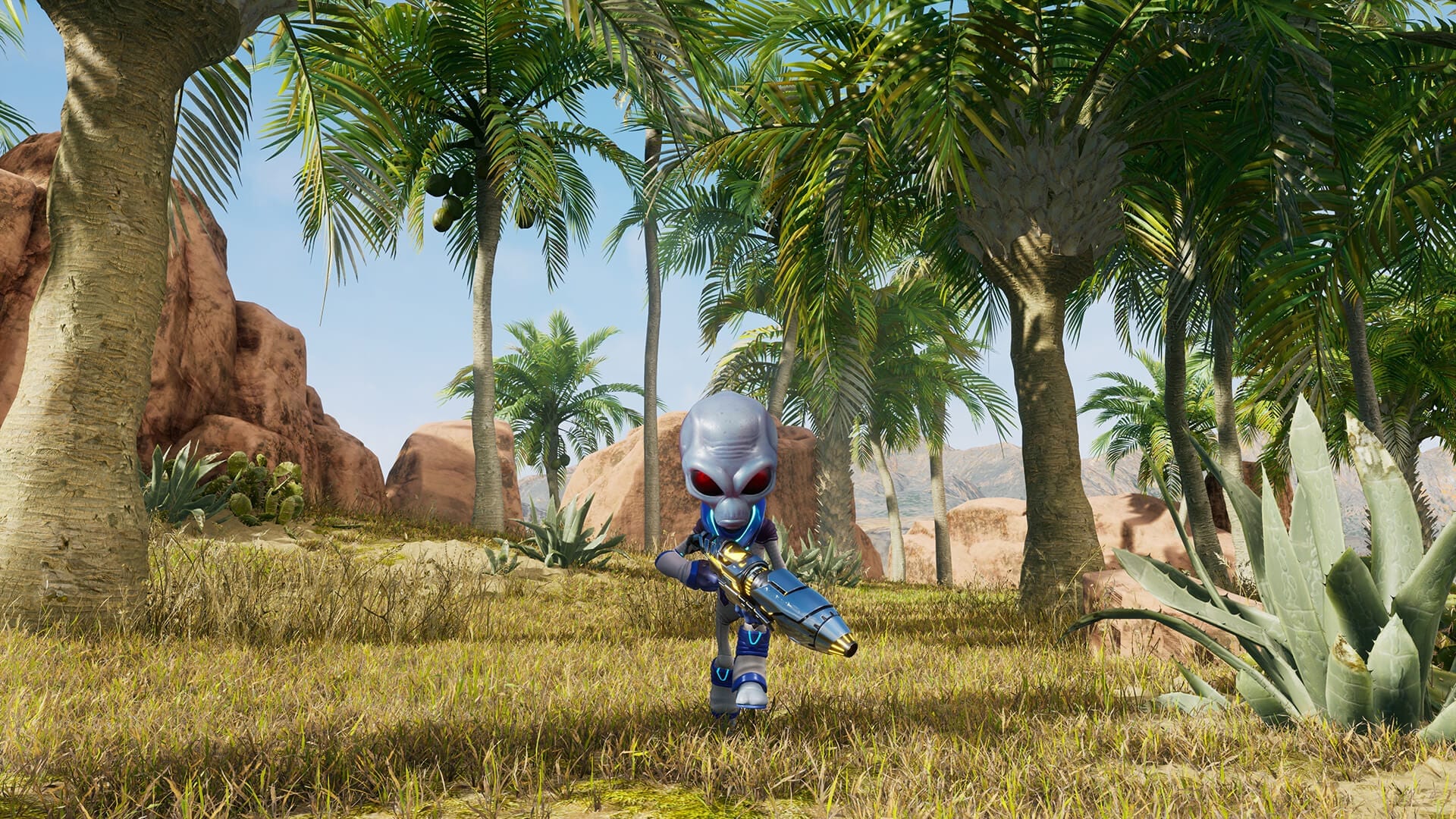 Destroy All Humans! is back and ready to take over humanity all over again thanks to the 2020 remake of everyone’s favourite cult sensation. The remade game promises all the hilarity and wild fun of the original 2005 hit, with new abilities, objectives and a visual overhaul. What more could you ask for?

Destroy All Humans! is often celebrated as being one of the funniest video games of all time – and for good reason. Originally released on the PlayStation 2 and Xbox 360, Destroy All Humans! was likely the game which had your younger self giggling all through the night as you played way past your bedtime. With its tongue-in-cheek humour, ridiculous mechanics and overall wackiness, it’s since become one of the most fondly remembered games of its generation.

The story takes place in 1959 as you, Cryptosporidium-137, plan to take over the Human Leadership. His alien race known as the Furons need to harvest themselves some human brains to keep the species thriving, and so it’s up to you to Destroy All Humans (you see what they did there?) Luckily for you, the human species is pretty dumb, meaning you’ll just need your creativity – and your arsenal of weird and wonderful weapons – in order to achieve your goal.

Speaking of which, let’s take a look at some of the most effective (and most fun!) ways to destroy all humans in Destroy All Humans!

One of the best ways to take out some of those pesky humans is with your trusty Abducto Beam. This nifty weapon is a part of your flying saucer, and gives you the opportunity to take to the skies for more aerodynamic kills. With the Abducto Beam, you’ll be able to lift and hurl any objects you desire, whether that be tanks or, yes, even humans. The only limit with this one is your imagination, so get creative to rack up those kill counts.

The Furon race has a lot of awesome skills and your psychokinetic ability is just one of many. Using this unbelievably cool talent will allow you to move objects with your mind without needing to rely on your ship. That might sound a little vanilla, but this is the power you’ll need if you want to, say, crush a farmer with a cow, so don’t underestimate its value!

Your HoloBob power also stems from your PK toolset, and will enable you to take on the appearance of a nearby human. Your human suit will permit you to go undercover to avoid detection, giving you the chance to get truly devious with your deaths. What you do with this chameleon-like ability is up to you, but use your powers wisely to be the craftiest Furon you can be.

Although plotting your kills can be a lot of fun, it’s sometimes just as good to go in and just give someone a good ol’ fashioned whack on the head. Thanks to the flexible gameplay of Destroy All Humans! this is a totally viable way to take out some of those awful human beings. You can use a variety of weapons to get the job done, but you can also just steal a person’s hat and give them a thwacking with that. Why the heck not!

A Zap Of Teslatastic Electricity

If you’re a fan of drama then blasting your foes with your electrifying Zap-O-Matic is a tried-and-tested way to dole out some devilry. Crypto is a dab hand with a gun, and this is just one of many in your arsenal which delivers a heck of a punch, and it’ll just so happen to light up the night!

The best kind of enemy is an enemy who’s charred to perfection, and thankfully you’ll have the Death Ray to help you achieve this. As one of the most powerful weapons in the game, this weapon is part of your flying saucer, and will cook your victims to perfection every single time. What’s even better is that the remake adds the ability to shoot downwards – just one of the new gameplay additions you’ll experience compared to the original. The added bonus of the Death Ray is that you can also use it to roast vehicles and buildings, along with your enemies. Brutal? Yes. Fun? Absolutely.

Destroy All Humans! wants you to unleash your creative killing abilities and have fun while wiping out the human race, so when it comes to killing, the only limitation is you! Both your flying saucer and your Crypto-self come jam-packed with weapons, features and tools for you to use as you please. Along with the guns, skills and ways to kill we’ve already mentioned, there’s tons more, including the Ion Detonator, the Disintegration Ray and the Quantum Deconstructor!

When it comes to taking out the human race, fun is the first port of call, and Destroy All Humans! puts the power – and creativity – in your hands.

Test out your human-killing skills in Destroy All Humans! now available on Xbox One, PlayStation 4 and PC.