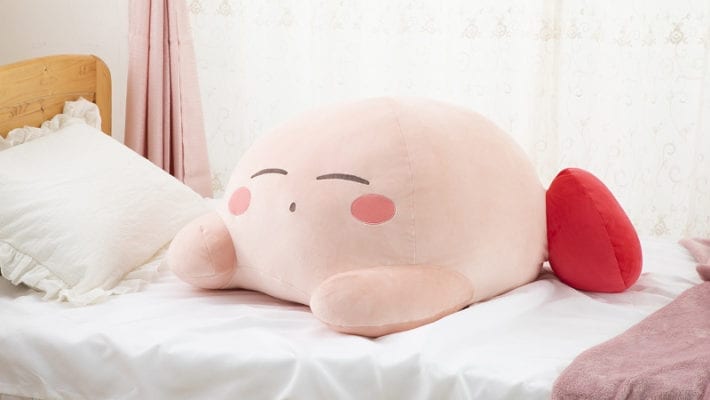 Do you ever lie awake at night wishing that you had a massive Kirby lying by your side? I’m glad it’s not just me.

Thanks to Takara Tomy, you can now pre-order a giant Kirby plushie, which is due for release in June [via Siliconera/Comicbook]. The extra-large toy features everyone’s favourite pink blob on his belly having a nap, which is something I can relate to on a spiritual level. The plush will cost around 11,000 yen (around $105) and has only been announced for release in Japan thus far.

Kirby will also be available in two smaller sizes, meaning you can either buy an appropriately sized pal or buy all three and make a pudgy totem pole of cuteness. HAL Laboratory has also said it will release other Kirby items throughout 2021, which includes various other pieces of merchandise and books.

We first met Nintendo’s hungry round boy back in 1992, with the character first starring in Kirby’s Dream Land on the Game Boy. Since then, the adorable ball of joy has battled it out in Super Smash Bros, saved Dreamland from various threats and was last seen in the 2020 Switch release, Kirby Fighters 2.

Of course, this isn’t the first time Nintendo has transformed its characters into big, adorable companions. You might recall this absurd chair modelled around the Pokemon Ditto, as well as this stupidly large Lapras pool float. I can think of nothing better than nerding out by the pool and pretending to use SURF with a beer in hand.

These Pokemon creations may be practical, but my personal favourite is the human-sized Snorlax plush.

Snorlax’s iconic chonky bod makes this plush the perfect bean bag alternative, large enough to accommodate small kids and curled up adults alike. You know what they say, you haven’t quite lived until you’ve napped on top of a napping Pokemon’s belly.