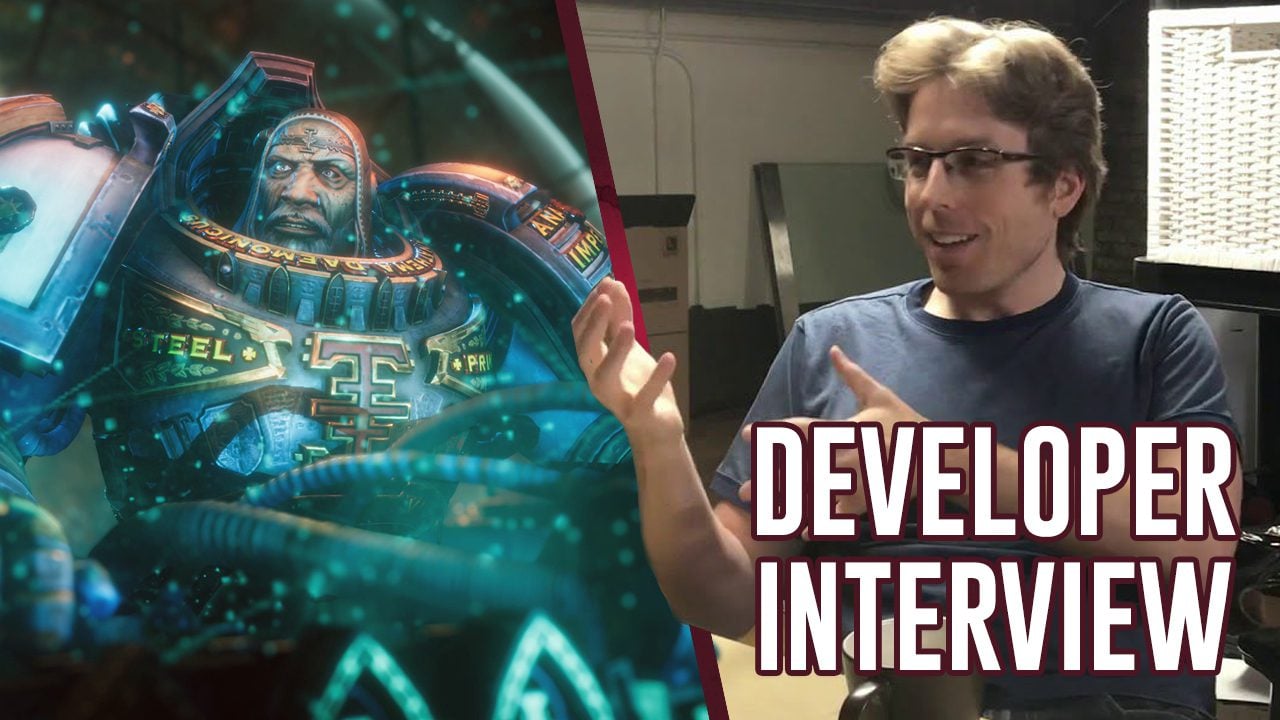 Noah Decter-Jackson is the CEO, Creative Director and Co-Founder of Complex Games, a studio for hire turned RTS powerhouse. His latest project, the reboot of Warhammer 40,000: Chaos Gate focuses on the Daemonhunters of Nurgle and stopping the biological Bloom threat from infecting the entire grim-dark galaxy.

For those who aren’t aware of his work, Noah Decter-Jackson helmed a previous Warhammer 40,000 mobile RTS titled “Horus Heresy: Drop Assault” that was released in November 2014.

This release also marked a new beginning for Complex Games as it dropped their mercenary contacts with the likes of EA and Disney and stretched their legs with the Warhammer 40,000 licence.

It’s safe to say that the Warhammer 40,000 licence is in safe hands over at Complex with Decter-Jackson and his team being avid wargamers. In fact, they have a dedicated wargaming table at the ready for staff to bust out their armies at any point. Although Decter-Jackson is normally knee-deep in running a game development studio to join in half the time.

What is Chaos Gate? – Noah Decter-Jackson

Warhammer 40,000: Chaos Gate was released back in October 1998 as a digital answer to the Games Workshops tabletop phenomenon. Featuring solid RTS gameplay elements, the story focused on an army of Ultra Marines led by Captain Kruger as he attempts to recover the Concordat Chaosium.

A pre-Horus heresy artefact and the property of Chaos Lord Zymran, the fight for the Concordat Chaosium involved skirmishes and various campaign scenarios true to the lore and tabletop elements of 40K. Chaos Gate: Daemon Hunters is a reboot of the franchise and focuses on a squad of Grey Knights looking to take down the forces of Nurgle and neutralise the Bloom threat.

Whilst Drop Assault explored the beginnings of the Horus Heracy and the rise of Chaos in the galaxy, Chaos Gate: Daemonhunters is dealing with a deep-rooted Chaos threat that has serious potential of wiping out all of existence in the galaxy. Instead of sentient life, the forces of Nurgle plan of spreading their unique brand of plague to bring life under their control.

Our Sit Down With Noah Decter-Jackson

We kicked things off with Decter-Jackson by sharing our nostalgia for Warhammer 40,000 tabletop, with myself starting out with Ultra Marines (as did most teenage boys) and Decter-Jackson having a slightly different introduction into the grimdark galaxy we know and love:

“I had a bit of a strange start with 40K” states Decter-Jackson. “Myself and my friends went and bought the Epic Warhammer 40,000 starter box, and of course, the Space Marines were snatched up straight away. I ended up with Orks as a starting point, but they’re fun!”

After self indulgently going over the various different factions we’ve run in the past and our kitbashing skills. We get down to business:

GameByte: So I’ve been reading up on your history with Complex Games and the transition you’ve made from a ‘for hire’ studio to one working on your own titles. What made Complex and yourself decide on moving onto a PC focused, grim-dark real-time strategy game?

Noah Decter-Jackson: “Well all of the company decisions ultimately come down to me in the end anyway  (Laughs). To give you a very quick full circle, we started as a few guys at a University starting this thing over 20 years ago. We started by building our own game idea from scratch with no external engines.

We had this core PC gaming experience we had in mind at the time which was a real-time, hand-to-hand combat game. That really speaks to the longevity and passion of the team in terms of what we’re doing right now.

Beyond that in terms of 40K, some of my business partners have been playing 40K since we were in our teens. It’s one of our joint passions. When we were looking to strike out on our own, we wanted to do something the team would get really passionate about and get behind.

With it being part of our DNA, we decided to go and work with the 40K licence. Back in 2012, we started to think about this game in the mobile space as that’s where our experience was. We pitched the idea to Games Workshop, they liked it and we release Horus Heresy: Drop Assault.

Our interest as gamers, as a studio and in our lineage, is PC. We wanted to bring out a title that not only represented this but gave players our own take on the RTS genre.”

Decter-Jackson then made the point of stating Chaos Gate: Daemonhunters isn’t any form of sequel to Horus Heresy: Drop Assault, mostly due to the timeframe in the 40K canon. With the Horus Heresy taking place near the beginning of the IPs lore and Daemonhunters taking place in the here and now of the franchise, both games are very disconnected by hundreds of years.

There’s also been great care taken with the handling of Primarchs, mostly due to them not making any major appearances in the overall canon. Decter-Jackson sees them as a vessel alongside other cast members to drive the game’s story forward.

The interview continues on the next page. Make sure to keep reading to find out even more about Chaos Gate – Daemonhunters.