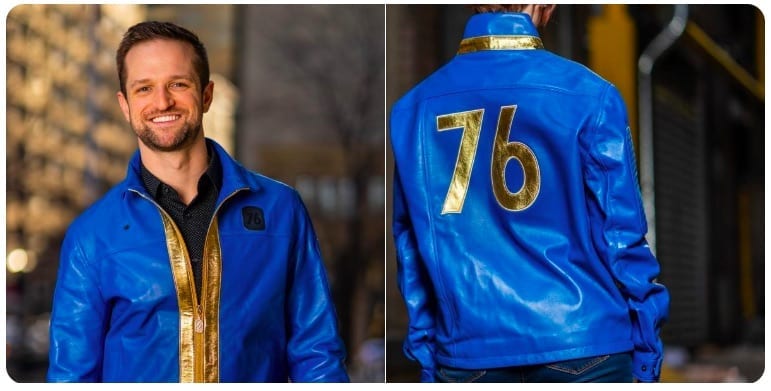 Bethesda is still working hard to recover from its launch of online multiplayer, Fallout 76. The game, which released last year, was badly received by Fallout fans and was criticised for its lack of story, lack of NPCs and its various bugs and issues.

Things got worse when people who forked out for a special edition version of the game received a low-quality nylon bag instead of the fancy canvas bag that was advertised.

The disastrous launch has lost the franchise a lot of fans, but that hasn’t stopped Bethesda from trying. Along with many, many patches and bug fixes, the company decided to send out the canvas bags after all.

Over on Twitter, Bethesda proudly showed off a very…interesting jacket which is currently up for sale, but gamers were quick to take the p*ss.

Fresh out of the Vault! These premium #Fallout76 leather jackets are now available on @BethesdaGear https://t.co/TvN74An3yU pic.twitter.com/lbqy9QIqyx

One user joked: “Made from real @BethesdaStudios leather!”

Another added: “Order now and the jacket will clip through your body.”

Order now and the jacket will clip through your body.

Others took the joke even further, using Bethesda’s own apology over the canvas bags against the company…

“Due to an unavailability of materials, he had to switch to a nylon F76 jacket in your order. We hope this doesn’t prevent anyone from enjoying what we feel is one of our best pieces of F76 merch.”

Somehow I still saw this in my mind when I read that #Fallout76 pic.twitter.com/qSJW2csxD3

Post production some items may of slightly changed, but rest assured it’s the best quality that you deserve pic.twitter.com/67sCUpqMkJ

It was even claimed that Bethesda had to remove an earlier tweet due to the barrage of criticism.

Lmao they deleted the one they posted earlier pic.twitter.com/hWDL1tL4P4

The following Twitter user summed it up pretty nicely, saying: “Like, let’s be real. Did yall really think you would get any form of positive response after the bag incident?”

Like, let’s be real. Did yall really think you would get any form of positive response after the bag incident? ?

Maybe the people who paid $200 for a $5 bag should get this “leather” jacket FOR FREE. ? @Fallout @bethesda pic.twitter.com/HjwD0PBscM

If, for any reason, you want one of these blue leather jackets with gold features, you can pick one up right here. Spoiler: it costs an eye-watering $276.