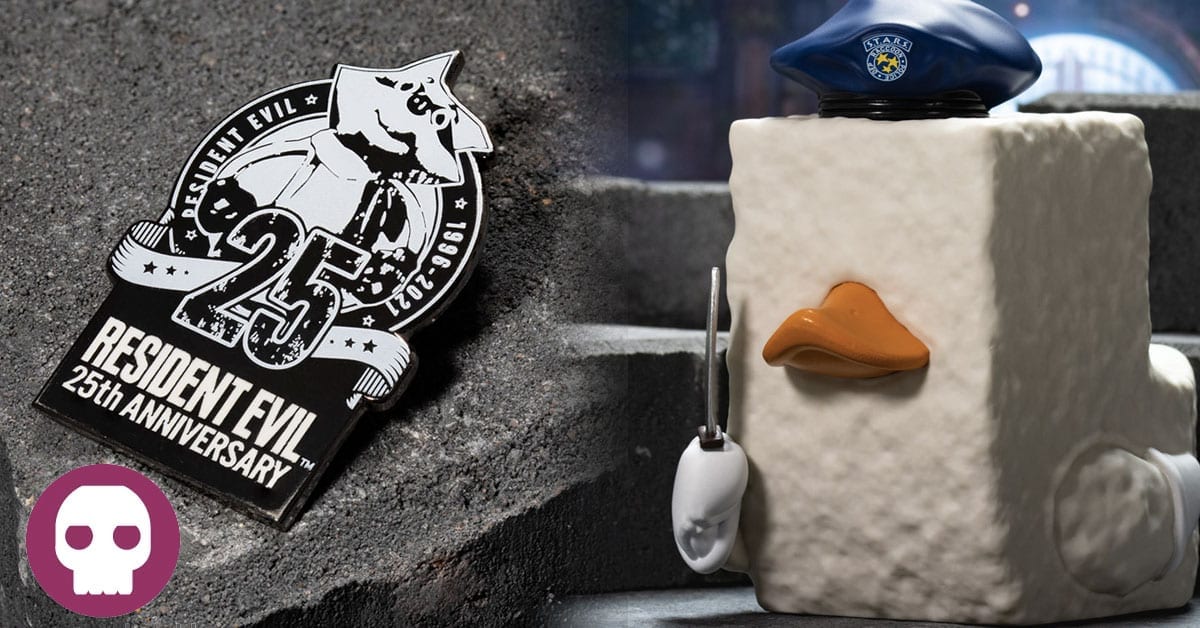 Numskull has launched a new must-own range of Resident Evil merchandise, perfect for any fan of this classic survival horror series.

For a number of years now, Numskull has brought us some fantastic merchandise in the Resident Evil series, and recently a new line of Tubbz, the cosplaying ducks was announced.

You can now pick up various characters from the Resident Evil franchise in their Tubbz forms, including Leon S. Kennedy, Claire & Chris Redfield, Jill Valentine, Ada Wong, Hunk, Nemesis, the RE4 Merchant, and the legendary Tofu!

Recently it’s also been the 25th anniversary of this iconic survival horror series, with the first Resident Evil game releasing for the original PlayStation back in 1996. I can’t believe it’s been that long already!

To celebrate the 25th anniversary of this beloved series, Numskull has launched new Resident Evil merchandise to commemorate the brand.

So what are the new Resident Evil goodies from Numskull I hear you ask? Well, let’s start with the specially branded 25th anniversary items, shall we?

One of my personal favourite items is the 25th Anniversary Enamel Pin Badge. This awesome pin is made of a “premium quality hard enamel metal” with a “glossy finish”.

The Resident Evil 25th Anniversary Mug is also another personal favourite of mine, especially being a lover of hot tea and coffee.

This snazzy black mug is made from high-quality ceramic and has a 325ml/11oz capacity. It also features an enamel & metal Resident Evil 25th Anniversary badge on the front.

Next up in the range is the snapback cap, perfect for residents of Raccoon City.

The Resident Evil 25th Anniversary Snapback is made from 100% high-quality polyester, features a curved bill snapback design, and has a 3D rubber 25th-anniversary badge logo on the front.

When Numskull’s Resident Evil 25th anniversary range was announced, so too were other must-own goodies for fans of the series.

My absolute favourite of which is the Resident Evil Umbrella Corp. Lamp. This awesome lamp proudly displays the emblem of the iconic bad-guy-corporation of the series.

The Umbrella Lamp is 199m(h)x199mm(w)x55mm(d) and is perfect to mount on your wall, or place on the desk or shelf, ideal for highlighting all your other Resident Evil collectibles.

The Umbrella Lamp is powered by a USB-C cable (which is provided in the box) or 3x AAA batteries (not included).

Keeping with the Umbrella Corp. theme is the Resident Evil Wireless Charging Mat.

This evil charging mat features the Umbrella logo on its “sleek, compact design with non-slip rubber” base. The 10W fast-charge mat makes it extra easy to charge your smartphone and tablet devices, compatible with iPhone, Samsung, Nokia, and more.

We all have console controllers to charge, but we Resident Evil fans want to charge in style and that’s exactly what the USB C LED Charge Cable & Thumb Grips allows us to do.

This Resident Evil bundle of joy includes a 1.5 metre-long (5ft) charge cable which is LED lit to indicate your controller’s charge status. It also features the Umbrella Corp. logo on the USB plug.

The charge cable is tangle-resistant with an 800+ bend lifespan and is compatible with PS4, PS5, Xbox Series X|S, Nintendo Switch, and other USB C devices. Oh, and as an added bonus, you’ll also get two Umbrella Corp. rubber thumb grips.

Finally, now that the summer is practically here, we not only want to protect our eyes from the bright sunbeams, but a quality pair of sunglasses is the ideal protection for those that suffer from hay fever.

Thankfully the Resident Evil RPD and Umbrella Corp. Sunglasses offer us that very protection in style!

The RPD Sunglasses are in dark blue with the RPD log, while the Umbrella shades are in Black & Red with the iconic logo. Both pairs of sunglasses have a lightweight frame and are dark-tinted.

The new Resident Evil merchandise from Numskull is fit for only the best zombie killers, and if you want to check out the full Resi range, check out the official website!

So, what are you buying? Let us know across our social media channels.

In related Resident Evil goodness, Resident Evil: Village is the next chapter in the iconic survival horror series and releases on May 7th.

You can pre-order a copy of Resident Evil: Village from the GameByte Shop which comes with a limited Lenticular Sleeve! (while stocks last).

Items provided by Numskull. None of the links in this article are sponsored and/or affiliate links.