Dungeon Mayhem is a simple card game with Dungeons & Dragons themes. Each player picks one of four characters, each based on a class in D&D, and plays cards from a deck that allows them to deal damage to other players. The last player standing wins. Cards also allow you to draw, heal and take extra actions each turn, but each character also has three special abilities unique to them, which can do anything from stealing other players cards to swapping players remaining hit points.

I have a D&D group who I’ve been playing with for about a year, and we often play board and cards games to break up our sessions. We’ve played the original before, but as a group of six, we’ve been able to play only whilst waiting for others to show up, due to the max players of the original being four. So when news of not only an expansion for the original to take it up to six players came out, but also a whole new set of six new decks that were monsters, we were excited to try them out.

The original was always good, but the new monster decks in Monster Madness make the game feel less like a start of the night warm up game and more like a fun and silly party game (especially now we can play with six players) which is largely down to the special powers that the monster cards possess.

In our first playthrough, I picked “Delilah Deathray” the beholder, and one of their powers is as follows:

“Each opponent can choose to praise your greatness. Do two damage to those who choose not to.”

But this went both ways as well, as another player was using Mimi LeChaise the mimic, and he mimicked that power, so we had to return the weak compliments. But then our DM, who was playing Dr Tentaculous the Mind Flayer, used one of his powers to steal the top card of my discard pile, and then we had to give a third round of praises within the space of a couple of minutes, which was as hilarious as it was ridiculous.

However this time, I gave a genuine answer, and told my DM how I’d used him as an example on Reddit of how to DM well for people with aphantasia (which is the complete inability to visualise anything within your mind which, as you can imagine, isn’t ideal for D&D). He responded by telling me that he’d already seen that post, which I was unaware of, and he could remember exactly where he was when he had, because he had been so flattered by it, and in that moment our cop-out compliments had flipped into something that was genuinely touching and unexpected. And that was really not something I had expected from a silly party game.

Of course, the moment passed and we got back to stupidity: dancing round the table, insane late game comebacks and some surprisingly well thought out strategies.

The merits of this game don’t stop with the gameplay though. The art on the cards is beautiful and represents D&D in a very quirky and fun style that matches the tone of the game perfectly. It’s a mixture of digital art for the original game and Monster Madness, and a more traditional marker style for the two deck “Battle for Baldur’s Gate” expansion, but they match up well. 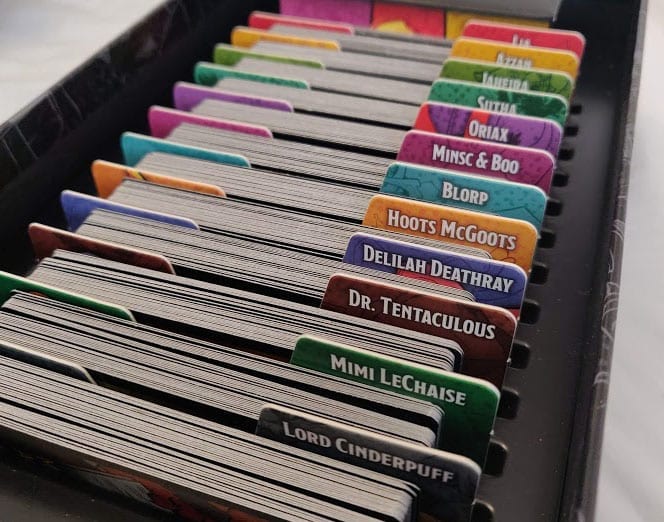 Dungeon Madness comes in a box large enough to store the original game and expansion if you have them, along with dividers for all 12 decks, extra tokens for the decks that don’t come with Monster Madness (so if you’ve lost any tokens from your original game, Dungeon Madness has you covered!) and a box to keep the tokens in. There’s something really satisfying about seeing them all together in the box, and the dividers make it easy for everyone to pick out a deck each time. Given that Dungeon Mayhem is the type of game you’ll play multiple rounds of, this really does help a lot.

If you’re new to Dungeon Mayhem, I would recommend going straight for Monster Madness, especially if you have a larger group size and are looking for something a little more silly than strategic. The original game is a lot less game breaking in my opinion, (although that’s not to say the original decks can’t stand up to the new ones), but Monster Madness is a lot more fun, and will give you a larger base of decks to choose from with the option to add more later. Regardless if your friends have or haven’t played D&D, it’s a simple, pick up and play game that everyone can enjoy. As my DM put it, “Good characters. Great for parties. What’s not to like?”