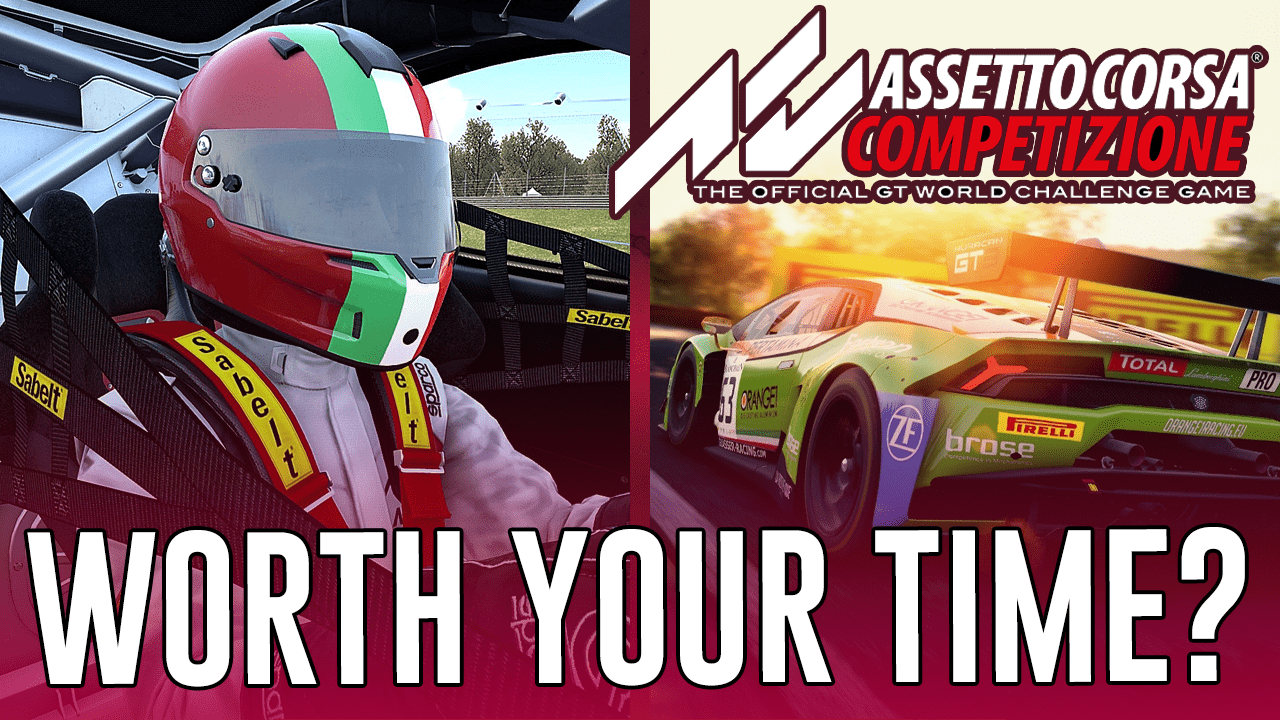 If you’ve played Assetto Corsa Competizione when it was released for consoles back in 2020, you might be hesitant to pick up this next-gen experience. Plagued with bugs and frame drops, it’s fair to say that the previous generation of consoles initially struggled with this PC title based on the GT World Challenge.

This hardcore sim racer was the perfect introduction to those looking to get involved in serious console racing. But does Kunos Simulazioni’s next-gen upgrade for the PS5 and Series X live up to the hype?

Let’s Start From The Bottom

I love racing games. I’ve spent countless hours in iRacing. I’ve invested in my own racing set up. I even went down to the McLaren Shadow Studios to check out their esports sim rigs. So, when it came to reviewing Assetto Corsa Competizione, I was curious to see how the new-gen upgrades would improve on the series’ problematic 2020 release.

For full transparency, I reviewed this game on PlayStation 5 with both a wheel and DualSense controller. I race with a Thrustmaster T300RS and I used the Formula Wheel Add-On Ferrari SF1000 Edition rim. It’s nice to see a PS5 racing game with wheel support so early into the console’s lifespan. However, I’m lucky to own these. Not everyone has the money lying around to drop on an expensive sim racing setup. As an avid sim racing fan, I was really hoping that Kunos Simulazioni would improve upon the input issues that plagued the Playstation PS4 Pro and Xbox One editions.

I initially found the DualSense controller quite literally unusable. This isn’t due to my skills – my wheel input felt clean and responsive, as you can see in the video below.

I’ve played other racing games on the PS5 with ease, but Assetto Corsa Competizione needed some serious tinkering with the controls to even be slightly usable. Now, I understand car setup is a key part of sim racers. In fact, it’s usually one of my favourite parts when implemented well. But the default stick settings made it all but impossible to smoothly turn into corners, owing to the small travel on the left stick, paired with the poor smoothing. This was the case even with steering assists on. I had to spend a significant amount of time adjusting steering sensitivity and smoothness. To save you a few hours, here are the settings that worked best for me:

This immediate lack of accessibility makes it incredibly difficult to recommend to more casual racing game fans. This is a real shame, because the haptic feedback implementation on the PS5 controller was very impressive. At least my frequent wheel spin felt immersive.

Is It All Bad?

Assetto Corsa Competizione isn’t worth thinking about if you want to sit on the couch. It’s definitely not a controller racer, requiring finesse in steering and pedal inputs even with assists. It’s far more frustrating to play on a pad than GT Sport or F1 games – games that it does, in theory, want to compete against in this market.

That’s not to say I didn’t enjoy my time with Assetto Corsa Competizione – far from it. The game now boasts 4k graphics, with a consistent 60FPS. This is, of course, incredibly important for racing sims on consoles. Even with intensive weather conditions and night driving, Assetto Corsa Competizione is certainly a gorgeous game. The improved visuals make it immensely satisfying to race in all conditions; be that driving through a night stint in the hills of the Ardennes at Spa, or fighting the car while enjoying the typical British weather of a rain-lashed Silverstone.

No matter the environment, the game maintains its performance and looks good while doing it. The PS5 purrs quietly as it takes full advantage of Unreal Engine 4 to ensure photorealistic weather and motion capture animations in single player and multiplayer. It truly does look like and feel like a next-gen game, helped even further by its improved tyre and aerodynamic models.

WHAT ELSE IS IN Assetto Corsa Competizione?

On launch, many critics claimed that Assetto Corsa Competizione lacked content. However, over the course of 2021, Kunos released a bunch of patches. This means we’ve been treated to a variety of modes, which can often offer a nice change of pace. While Assetto Corsa Competizione is the official video game of the GT World Challenge, it also includes other championships that allow you to try different cars and formats. I particularly enjoyed the British GT, Ginetta GT4s and Porsche Cup 992s. All of these cars handle in different ways and have their own regulations and race styles to contend with. If you’re a racing fan like me, this will no doubt provide you with hours of fun.

Customizability is a major plus point for Assetto Corsa Competizione, with the option to play through a career, driving in the GT World Challenge across its 2018 season. This lets you try out races across Europe – from Spa in Belgium, to Silverstone and Monza in the UK and Italy. Unfortunately, the career doesn’t hold a candle to other racing games released in recent years, especially F1’s superlative MyTeam career mode. Nonetheless, it’s a fun enough way to get a handle on the game, with a Gran Turismo style medal system providing a nice reason to replay it.

Let’s Take A Look At The Modes

The meat of the game comes from its selection of single races and championships. There’s the option to join a team for a whole season of the Blancpain GT Series, challenging you to perform across sprint and endurance races at a variety of circuits that mirror the real calendars from the 2018, 2019, 2021 or (with the additional DLC) 2020 seasons. It’s a nice way to add some immersion to your races in what is often a very solid single player experience. If the official series don’t catch your fancy, you can also create an “open series” championship. I had tons of fun letting anarchy reign and throwing different cars, tracks and formats at each other to create a chaotic championship only possible in sim racing.

If a championship is too much commitment for you, Assetto Corsa Competizione also lets you create single race weekends. You have the option to use the same official rules used across the Blancpain GT Series, be that the 2×30 minute sprint races used at ‘sprint’ rounds of the competition like Zolder and Brands Hatch, or 3, 6 or full 24 hour endurance races used at the various endurance events on the calendar. Does full endurance racing sound too daunting? You have the option to speed up the clock and save part way through.

So, Is Assetto Corsa Competizione Worth Your Time?

Want to take on this mega GT World Challenge, but don’t have a PC capable of running it? Assetto Corsa Competizione on PS5 is one of the most visually and mechanically realistic racing experiences out there. This update is miles better than any other ACC console offering, with its buttery-smooth gameplay and 4k graphics. The DLCs help to pad out the game and set it apart from any of its competitors. And, whilst the career mode doesn’t bring anything new to the table, the championship, challenge and online modes more than make up for it.

Unfortunately, if you don’t have the spare cash for a wheel and pedals, it’s a sub-par racing experience that leaves the taste of burnt rubber in your mouth.

A PS5 code was provided by PR for review purposes.