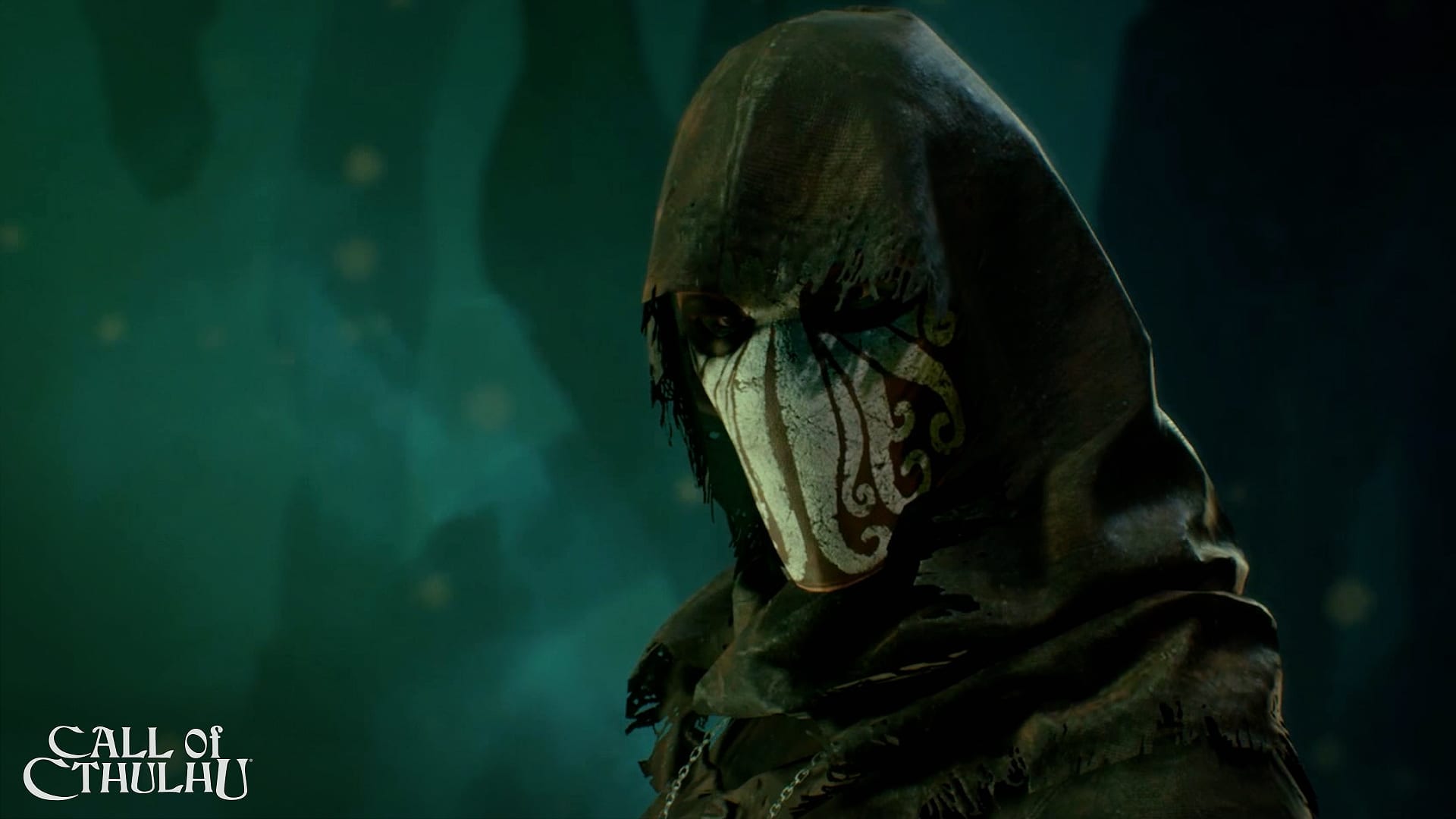 Taking place in 1924, Call of Cthulhu focuses on Edward Pierce, a Private Investigator. He’s asked to explore the death of the Hawkins family, after a relative suspects foul play. As a hard drinking World War I veteran with little else to do, Pierce reluctantly agrees to take on the case. Travelling to the island of Darkwater, Massachusetts he begins his investigation. 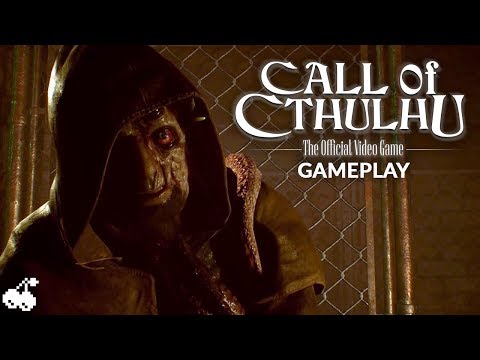 Evocative of a ‘choose your own adventure’ story and unlike conventional RPGs, Call of Cthulhu is refreshing amidst a sea of flat and disappointing Lovecraftian adaptations. This is because Cyanide Studios and Focus Home Interactive based the game on the already adapted and successful pen and paper RPG, as opposed to directly replicating H.P. Lovecraft’s original mind-bending short story.

As a lover and player of pen and paper RPGs, I found the games concept incredibly interesting. All of the elements that make table top RPGs great are there (albeit without the terrible range of GM accents). Unfortunately some NPCs are absolutely awful, most notably Officer Bradley. He has a voice that makes me want to stuff my ears full of cotton wool. His design is off-putting, much like the rest of the island’s filthy inhabitants but that may well be intentional. 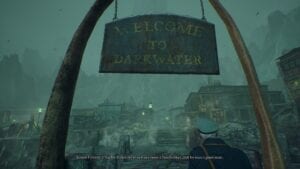 All of the NPCs possess a grimy quality, reminiscent of Dishonored. I’d go as far as to say this game is similar, except when it comes to combat (magic or otherwise). After all, there is very little combat in the game and Pierce carries no weapons. Initially, I was wary about the lack of combat, however once I became accustomed to it, I rather liked it. After all, in Cthulhu Mythos there’s no way to actually fight off the mysterious entities and terrifying creatures.

The lack of combat merely adds to the atmosphere, heightening the overall sense of dread and terror. There are a few jump scares of course but they don’t feel overused, something I was grateful for. They are utilised far too often in popular culture these days which can often negate their intended effect. Instead, you navigate this survival horror relying on other skills to uncover the grisly truth.

The protagonist, Edward Pierce brings very little to Call of Cthulhu. However, that’s not to say his character is badly written. I suspect this choice is intentional because H.P. Lovecraft’s characters are notoriously under-developed. The result is a much scarier experience because the reader, or in this case the player, projects themselves onto the character. 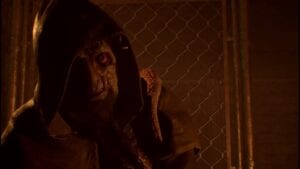 In true RPG style, you level up as the game progresses and you acquire character points. The skills you choose to attribute your character points to shift what you can and can’t do in the game world. As with table top RPGs, choosing to follow a conversational path involving intimidation requires enough strength points to succeed.

The skills you can choose to improve are: Investigation, Psychology, Spot Hidden (ability to find hidden items), Eloquence and Strength. The remaining two skills, Medicine and the Occult are entirely dependent on how well you investigate your surroundings. Finding occult items improves your understanding of the supernatural whereas picking up books on medicine increases your chances of survival.

As a Private Investigator you might think that levelling up ‘Investigation’ is a priority and you’d be right. However, it comes at a cost. Focusing on one skill means that many doors will close to you (and sometimes literally). For example, if you don’t possess enough strength you’ll be unable to activate important mechanisms, subsequently closing off entire areas. Similarly, when in conversation if your Psychology skill isn’t high enough, you’ll be unable to ascertain a characters true intention. 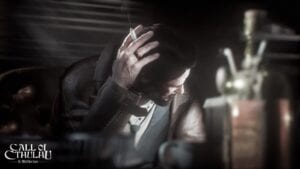 On occasion, Pierce will come across crime scenes which he must reconstruct. He uses an ability similar to Eagle Vision in the Assassin’s Creed games or Batman in the Arkham Asylum games. Though sadly, Pierce is definitely not Batman. In this investigative mode, Pierce’s senses are heightened. This allows him to find clues and unique occult items. As each part of an investigation is uncovered, the reconstruction plays out revealing more. Although, there’s little to no explanation as why or how Pierce has this ability.

Perhaps the thing I enjoyed the most about this game is the way sanity works. Any game inspired by Lovecraft needs to address sanity, or more accurately insanity. The way it works in Call of Cthulhu is that the more you investigate and learn, the more sanity you lose. The end of the game is dramatically altered by how much you’ve uncovered.

The game for the most part is linear but it contains plenty of open areas. If you’re like me and enjoy role playing, you’ll feel the need to investigate everything…and I mean everything. I want to find all the hidden occult items and take my time exploring every nook and cranny. I’m an investigator so you know damn well I’m going to investigate!

That means, if you want to get the ‘good’ ending then you’ll need to find a balance. If you explore too much or uncover something you shouldn’t have, those consequences will come back to haunt you. Whenever the words “This will affect your destiny” appeared at the top left hand of the screen, I became tense. 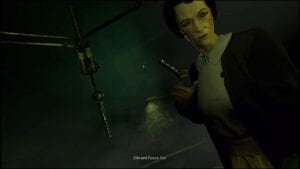 Being familiar with the Mythos I know full well that something will be coming and I won’t be able to stop it. During my game I chose very occult conversation options and made reckless decisions to read books I perhaps shouldn’t. As a result my Pierce would often hallucinate. He’d become lost in a seemingly endless corridor or take on another persona. The deeper you explore the path of madness, the more erratic things become.

Pierce also has a crippling fear of the dark which makes hiding from unspeakable, invincible beings even harder. If you hide in cramped dark spaces for too long (some of which are useful hiding spots) Pierce will have a panic attack. This mechanic means you have to be tactical with your lamplight usage and time all hiding spots accordingly.

On occasion, other characters will offer Pierce their help and expertise. Who you take help from, or whether you do, is another aspect that affects the ending. As you make your way through the already gloomy island, what you see is dependant on your sanity level. There’s no way to judge how well your sanity is faring making a seemingly linear story feel chaotic. From time to time, you’ll also step into other characters shoes, seeing and playing out events through their eyes. 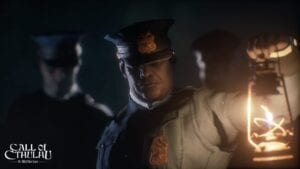 Overall this game may not compare to AAA titles but it has a definite charm. Call of Cthulhu uses the Unreal Engine and graphically it holds up okay. However, the hair animation was a source of irritation for me. It’s so distracting! Admittedly the cutscenes were fine but in-game it was dire.

Despite the graphics engine letting it down at times, I like the skill building mechanics and the effect they have on the story. With a release date so close to Red Dead Redemption 2, this game will undoubtedly slip into obscurity. But if you enjoy traditional pen and paper RPGs and have a penchant for Lovecraftian storytelling then this game will definitely not disappoint you.

Ultimately, the game left me feeling unsettled and at times helpless, unsure what to do or where to go next. Losing sanity is inescapable due to the source material and inevitable horrors await you in each chapter. The more sanity you lose, the less rational Pierce becomes and his perception of events and reality will alter. In that sense, it pays homage to its source material. The overall story and eerie atmosphere in Call of Cthulhu is executed incredibly well. Just don’t expect to run in guns blazing because this is a game that requires less firepower and more brainpower.