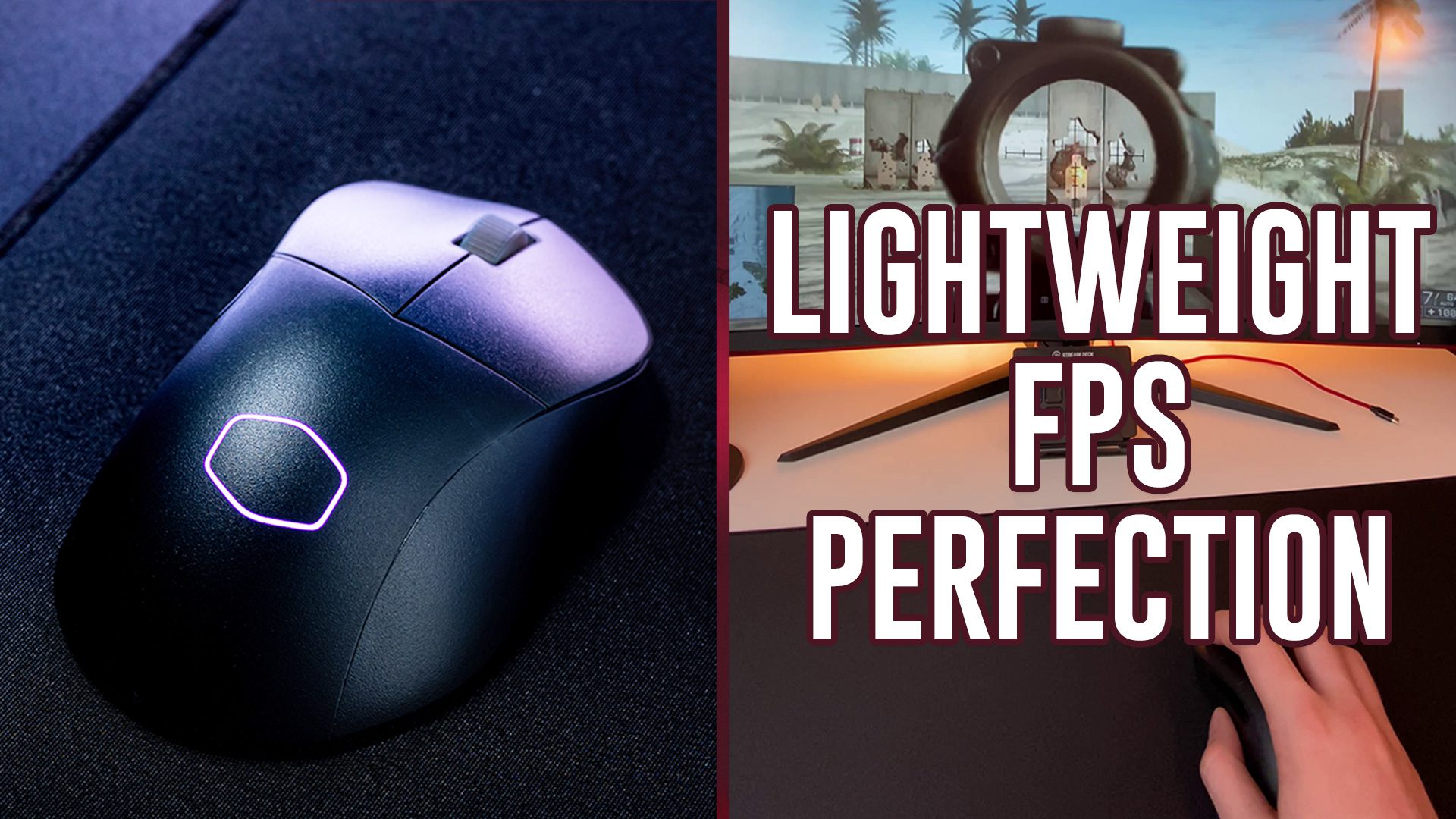 Aside from choosing which class to roll, picking a mouse is one of the most important decisions a gamer can make. As your main means of control in our fantasy worlds, it’s imperative that you find one that suits your purpose. If you’re looking for something to elevate your FPS gaming experience, then Cooler Master might have the answer for you. The MM731 Wireless Lightweight Gaming mouse is part of its new line-up of gaming mice. Weighing in at just 60g, it’s one of the lightest mice I’ve ever used. As such, it’s quickly becoming one of my favourites, too.

If you showed the MM731 to someone, they wouldn’t think it was anything special until they picked it up. That’s what I love about it. The design is incredibly understated, taking on the shape of a generic mouse with a matte black coating. A faint Cooler Master logo can be illuminated in RGB lighting if you’d like. However, leaving the light off gives the mouse a sleek and professional look.

Up top is nothing too fancy. There’s your usual left and right click buttons flanking a scroll wheel. These are fitted with optical switches which are apparently more responsive and durable over time. While I can’t speak for them being durable over a long period, they are most certainly responsive. I haven’t missed a single click during my testing, nor have the switches become stuck or faulty.

The scroll wheel is rubberised to provide some excellent grip, and it moves in distinct steps. However, while the distinctive scroll steps are great for switching weapons in games, it can be fatiguing while scrolling through webpages. If gaming is your primary use, it won’t be an issue. But if you’re also planning on using this mouse for productivity, it’s something to keep in mind.

To the left hand side of the mouse are two programmable buttons. These can be rebound to any command you like in the MasterPlus software, making them versatile if you’d like to set up custom macros. They have a very satisfying click, which is more than can be said for even some of the most premium mice out there. Sadly, these buttons can’t be swapped to the right hand side of the mouse. Left handed folk, you’ll have to look elsewhere, I’m afraid.

The matte black plastic does a fantastic job of making this mouse feel premium. Even with how light it is, there’s absolutely no flex or creaking to the bodywork when gripped tightly. I wouldn’t trust it to be thrown around the room, but it’s most certainly durable. The matte finish also does a good job of repelling fingerprints, so greasy snack stains won’t show up as easily.

Overall, the MM731 doesn’t do anything to break the mould in the design of its shape. If you’ve used something like the Logitech G Pro Wireless or the Razer Deathadder then you’ll probably feel comfortable using this mouse.

With that said, it is ever so slightly smaller than I would like. As someone with relatively large hands, I tend to prefer using a palm grip while wielding a mouse. However, the MM731 tends to promote a claw or hybrid style grip for those with longer digits. The smaller size likely plays a part in how lightweight the mouse is, so it’s a bit of a trade-off. It’s by no means a deal breaker, but something to keep in mind, for sure.

The biggest selling point of the MM731 is that it’s so lightweight. Cooler Master has managed to strip down this mouse to its absolute essentials, while somehow also cramming in RGB lighting. The result is a mouse that glides effortlessly across the mouse pad. The lack of a cable helps in this regard, too. With nothing to snag, you can move the mouse around completely freely without ever running into an obstacle.

The result is that I’ve never felt more in control of my mouse movements than with the MM731. When set up with the same DPI settings as my previous mouse, I already felt myself becoming even more accurate than before in FPS games like Valorant. Even while navigating my desktop for work purposes, I felt that I was able to open files and close windows more accurately than before.

What’s also great are the different connectivity options. A 2.4GHz USB adapter is stored inside the mouse itself and is the most reliable option while sat at a desktop. However, the mouse can also be connected to other devices via native Bluetooth support. For when travelling on the go, all you need to do is carry the mouse with you and you’re good to go.

You can also connect up to a PC using the included USB C wire. Even if you run out of battery, you’ll still be able to use the device. Not that you’ll find yourself running out of juice often. The MM731 is rated to last up to 72 hours of continuous use on 2.4GHz and 190 hours while using Bluetooth. After using the mouse for a week of 9-5 work and several evenings of gaming, I haven’t needed to charge the thing yet.

I was also able to pair the MM731 mouse with the Cooler Master’s XL MP511 mouse mat. This no frills accessory is perfectly matched with the newfound wireless freedom of the mouse. The XL variant that I have is capable of spanning my entire full sized keyboard while also leaving plenty of space for the mouse to move around.

There’s no fancy RGB to be found here, only a small Cooler Master insignia in one of the corners. This keeps inline with the understated look of the MM731, which I love. Anti-fray stitching around the edge makes for a durable pad that also features an anti-stain coating. I’m sad to say that I’ve had to put that stain resistance to the test as I accidentally spilled some pasta on it last week. Luckily, it wiped away easily and left minimal markings on the fabric.

The only complaint I have about the pad is that, even after a week of heavy use, the edges still remain a little unfurled. I’ve tried pinning the corners of the mat down overnight with heavy objects, but it refrains from ever lying completely flat. It doesn’t negatively affect my aim, but I do wish that the mat would have settled more quickly.

While the physical construction of the mouse is excellent, it’s in the software department that cracks begin to show. Tweaking the mouse is done via the MasterPro software. Sadly, there’s very little to suggest that this is ‘professional’ software at all.

For one, the software window refuses to let you resize it, meaning that it takes up the entire screen when opened. It’s also incredibly buggy. When I try to move the window to my second screen, it ends up turning the whole window upside down, rendering the software useless.

Despite being cumbersome, the software is mostly functional. Thankfully, you can fiddle with the settings and then close the software and  forget about them. There’s options to rebind all of the buttons on the mouse, adjust the DPI and lift off distance, and mess around with the RGB lighting. It’s all of the settings that you could need for a mouse, providing plenty of customization.

Taking stock of how the MM731 performs is impressive when you consider its price. Retailing for £89.99 in the UK, that undercuts a lot of the eSports focused wireless mice on the market that offer similar features. I was using a Logitech G Pro Wireless before this which retails for £139.99, and honestly? I think I prefer the MM731.

It’s not perfect – the software is lacklustre, it’s a bit small for my liking, and MMO players and productivity nuts might prefer to have more programmable buttons. However, the wireless convenience, super lightweight construction and stellar build quality are enough to earn it a permanent spot on my desk.