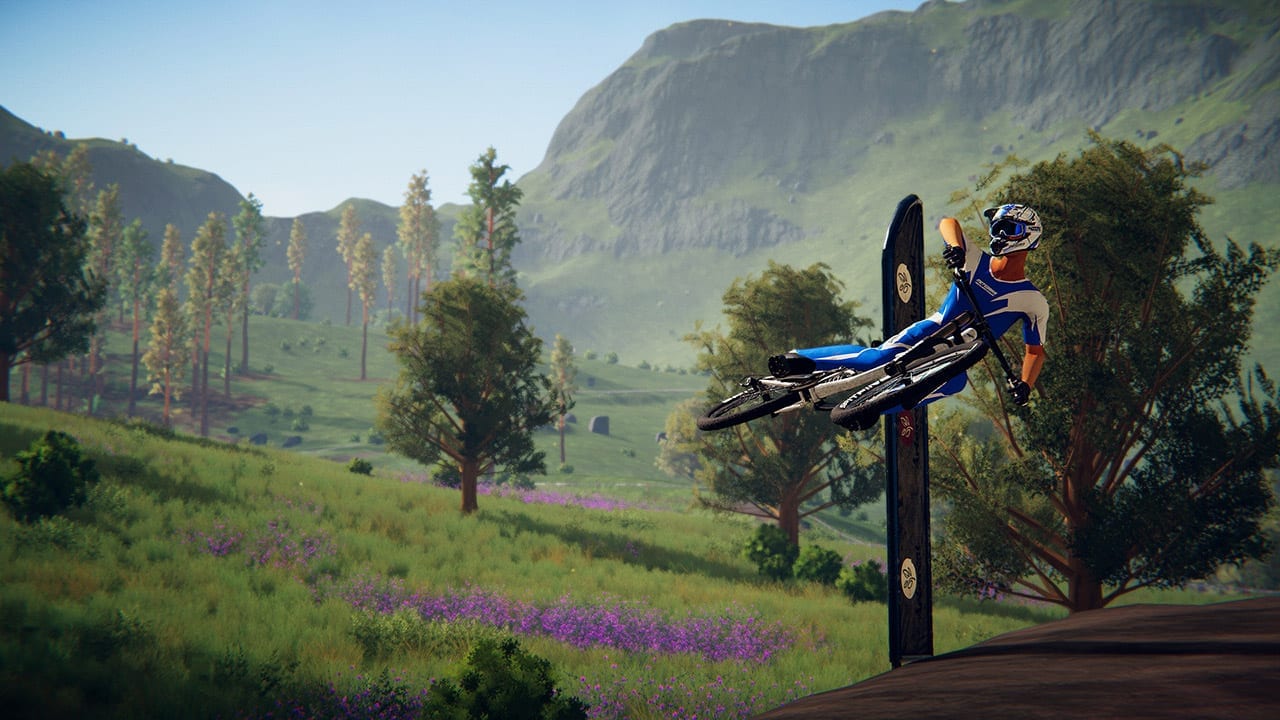 Descenders is one of the most entertaining extreme sports games of the generation. It’s a bold statement I know but there is no denying how fun a game it is. Nor is there any denying that extreme sports offerings this generation have been few and far between.

That’s not to say it’s a perfect game. It has got its flaws but you’ll still have fun along the way.

Descenders is an extreme cycling game. You can do jumps and tricks and, as the name implies, descend rapidly downhill. The courses are procedurally generated, which means there is variety, but there’s still a lot that feels familiar. As is the case with a lot of procedurally generated games.

It’s not all about going downhill though. There are trick courses that capture the spirit of games like Trials and there’s even a hub area to cycle around in and practice your stunts. Online multiplayer is also there for those that want to play with their friends, or just test themselves against other people.

All of this is wonderfully simple to jump into and have fun with, even if you’re not that good at the game. Pulling off a backflip at the last second or jumping over a massive ramp and not bailing feels like an achievement each time.

Descenders isn’t the most beautiful game you will ever see but it still has a nice style to it. Watching your character ragdoll as they fall off their bike is always entertaining in the “at least that’s not happening to me in real life” way extreme sports games can capture so well.

Lighting really helps environments pop, even in situations where the textures might not look the best. It’s not the kind of game that needs everywhere to look pristine because you spend so much of it going lightning fast. You’ll spend more time concentrating on not hitting a tree than any of the rougher elements of the game.

As mentioned previously, it’s the procedural generation that can ruin the game the most, by just making things a bit too similar. It can also often give you a course where the best option can be to ignore the track completely and just head to the finish line as the crow flies. You unlock items as you play through to make your bike and racer a bit more unique. It’s a little thing but it helps add a nice level of variety.

The soundtrack is easy to listen to to help you get into the zone. There isn’t a huge selection of musical tracks, unfortunately, so you’ll soon hear loops, but nothing is so grating that this should become a problem.

Descenders, in itself, is an accessible game. There are minimal buttons to press with most controls being on the sticks or the triggers. There isn’t really much in options to make it any more accessible unfortunately but you can look at them here to get an idea of the controls to get a better understanding of it before playing.

Career mode is the key mode of Descenders and a way for you to unlock new areas. You have to take on various challenges in a stage until you reach a boss level. This is a massive jump that can take a bit of practice to land.

The issue with this mode is it seems to reward you more for playing it safe than taking risks, as it’s all about getting to the next level. Due to it being procedurally generated you end up with a lot of “same but slightly different” moments but means you can never be fully familiar. It does add to the challenge of it all but it also means that you end up with a mode that can quickly lose its edge. This is due to it inadvertently encouraging you to play it safe rather than taking a risk, as there’s no real reward to taking that risk, apart from sometimes an extra life.

Despite the problems Descenders has it’s an extreme sports game that, at it’s best, does a great job at getting your heart racing. It’s fun to play, easy to pick up and difficult to master. It turns downhill biking into something accessible for far more people. At its worst, it’s just a bit bland, but it’s never completely flavourless.

With various areas to unlock, multiplayer, plenty of challenges and more there’s reason to come back to Descenders again and again. It’s a fun game, no matter the platform and, if you’re looking to scratch an extreme sports itch, Descenders may be the game for you.

Reviewed on PS4 with a code provided by the publisher.