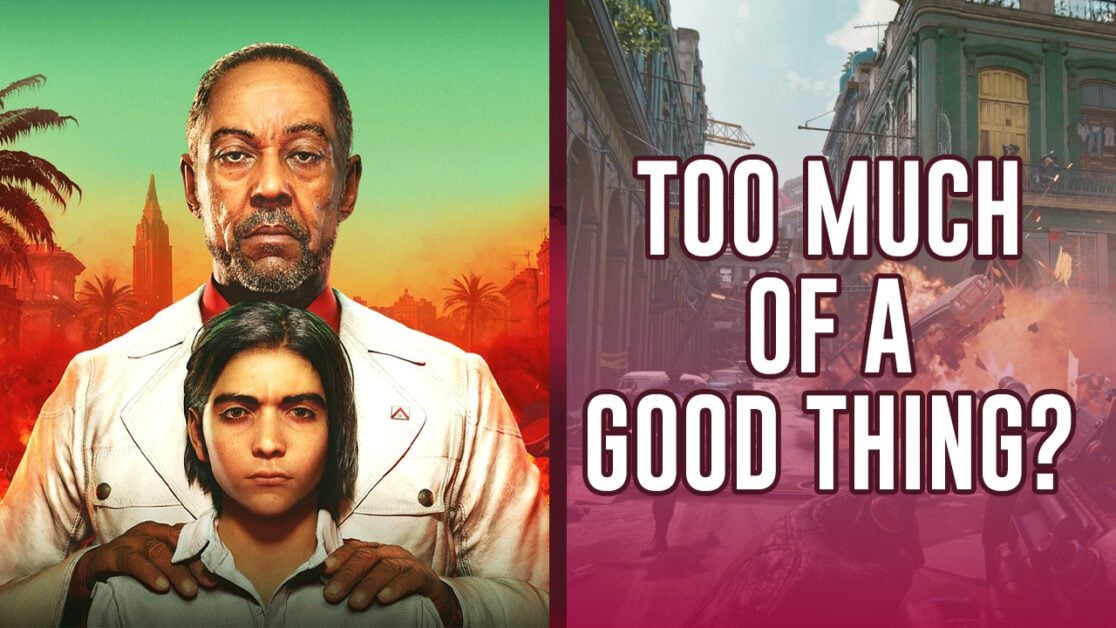 About halfway through the main story of Far Cry 6, protagonist Dani unintentionally breaks the fourth wall. “I’m guessing you want me to go there and kill them all, right?” they jest down the radio to their comrade. It’s intended as a jab towards Far Cry’s gorefest of a gameplay loop, but the joke doesn’t land when ‘going there’ and ‘killing them all’ is pretty much all you’ve done for the last several missions.

Far Cry 6 is a crying shame. The build-up to release had me believing that this would be a bold new direction for the series. A much needed mix-up of the tried and tested open world formula, akin to how Assassin’s Creed: Origins revitalised Ubisoft’s sister series. Instead, Far Cry 6 is an absurdly familiar ride – albeit one that, begrudgingly, remains irrevocably entertaining.

Let’s Start From The Beginning of Far Cry 6

The latest tropical outing from Ubisoft has everything you could want from a modern Far Cry game. Antagonising villain with a memorable face? Check. A massive open world with icons for days? Check. Enough weapons to make a military drool? Definitely check.

You play as Dani, a resident of the fictional Caribbean island of Yara. It’s ruled over by Anton Castillo, portrayed by the iconic Giancarlo Esposito. He’s a ruthless dictator that’s hellbent on ‘restoring’ Yara to its ‘former glory’. The island’s greatest success is manufacturing a drug that cures cancer. To leverage this, Castillo exploits residents of the island to harvest and manufacture this drug, whether they like it or not. With an armed force at his back, Castillo is an unstoppable force of nature that the player is ultimately tasked with taking down.

In the beginning, Far Cry 6 sets up this plot well. After a short introduction to both Dani and Castillo, we understand some basic motivations and get a look at the imposing villain up close. However, it’s shortly after the game opens up that the game creeps straight back to its safety net. You’ll be reminded distinctly of Far Cry 5 when I tell you that Castillo has three supporting leaders under his command. This splits the narrative into three distinct threads that you must complete before going for the jugular.

The resulting series of events sees you exploring the world to build up the revolutionary guerilla force, known as ‘Libertad’. While there are plenty of intriguing characters you’ll meet along the way, it’s all a disguise for what’s an ultimately repetitive gameplay loop. With each mission tasking you to curry favour with a new group or individual, many of the missions resort to pulling favours for the supporting cast. Much of your activity boils down to travelling to an area and shooting the place up. A few highlights, like a neat callback to torching a drug field, standout from the crowd, however.

Thankfully, much of the supporting cast are a genuine delight to interact with. There’s some true gems in here with distinct personality traits. With Dani as a sarcastic catalyst, the resulting cutscene conversations are often captivating to watch.

Of course, we have to mention the Amingo system . This mechanic sees you take along a pet for assistance in combat. Bringing Chorizo the sausage dog into battle with you is a bizarre event that still gets a giggle out of me every time. That said, the concept of bringing in an AI companion into every encounter does force the player’s hand when it comes to stealth.

In previous Far Cry games, solace could be found in exploiting the sandbox to take down encampments. However, Far Cry 6 instantly places a much heavier emphasis on action. While it’s possible to be stealthy, your arsenal clearly isn’t geared to play that way. Suppressor attachments for weapons quickly overheat, easily stunting potential stealth operations.

Most of the weapons at your beck and call are of a bombastic nature. There’s a frankly absurd number of unique weapons, all of which are customisable to your heart’s content. And then there are the ‘Supremo’ and ‘Resolver’ weapons. Supremo’s are equippable backpacks that almost act like an Ultimate ability. The one that I used the most initiated an area of effect attack that showered the surrounding area in a wave of fire. It also granted me the passive ability of a double-jump that scorches the ground beneath you. They all lean into this loud, explosive nature that permeates every aspect of Far Cry 6.

That extends to the open world of Yara

This gorgeous isle is instantly reminiscent of Far Cry 3 – I felt a strange wave of nostalgia wash over me when first setting foot here. While the adventures of Jason were a distinctly lonely affair, Dani’s are far from the case. You can’t go five metres without something new crying out for attention in this gorgeous, gargantuan world.

Following from Far Cry 5, new side missions and objectives open up by interacting with the world around you. While this is a neat way of encouraging players to take notice of the surrounding environment, it ends up being more distracting than enjoyable. There were several times when I knew I should be following a main objective, but would find myself makers just to unlock new side content. You’re almost certainly getting your money’s worth here, but you’ll have to work to unlock it all.

Sadly, Far Cry 6 has taken some inspiration from Assassin’s Creed: Origins in the wrong areas. Sections of the map are level gated to point players in the right direction. These levels are dynamic, increasing with the military presence as you cause more chaos across Yara. It’s impossible to meet the increasing level requirements through main story missions alone. Although the ‘optional’ missions are an interesting aside, most of them are far from relevant to the main narrative. It makes the game feel artificially bloated and overextends what could have been a tight, captivating story.

What About the Accessibility of far Cry 6?

An area where Far Cry 6 has seen huge improvements is in its accessibility. A dedicated menu is the first thing you’ll meet when booting the game up, with text-to-speech menu narration enabled by default. There are a couple of presets to choose from that are tailored for the likes of visual, aural, and motor disability functions. These are a great way of blanket changing a bunch of settings quickly, but the menus can be drilled down even further to get particularly specific. We’ll have a detailed accessibility guide published on GameByte later this week, so watch out for that.

Let’s Break the Score Down…

It sounds like I’m ragging on Far Cry 6 a fair bit, but that’s mostly just because of how much it feels like squandered potential. We’re at the sixth installment of this series now, spin-offs notwithstanding. And yet dismantling Castillo’s grip on Yara doesn’t feel too far removed from going up against Hoyt Volker, Pagan Min, or Joseph Seed. If you’ve played a recent Far Cry game, you know exactly what you’re in for with 6. It’s a well-trodden formula of epic scale that has just enough life in it to keep it from being tired.

Code was sent to us by Ubisoft PR for review purposes.