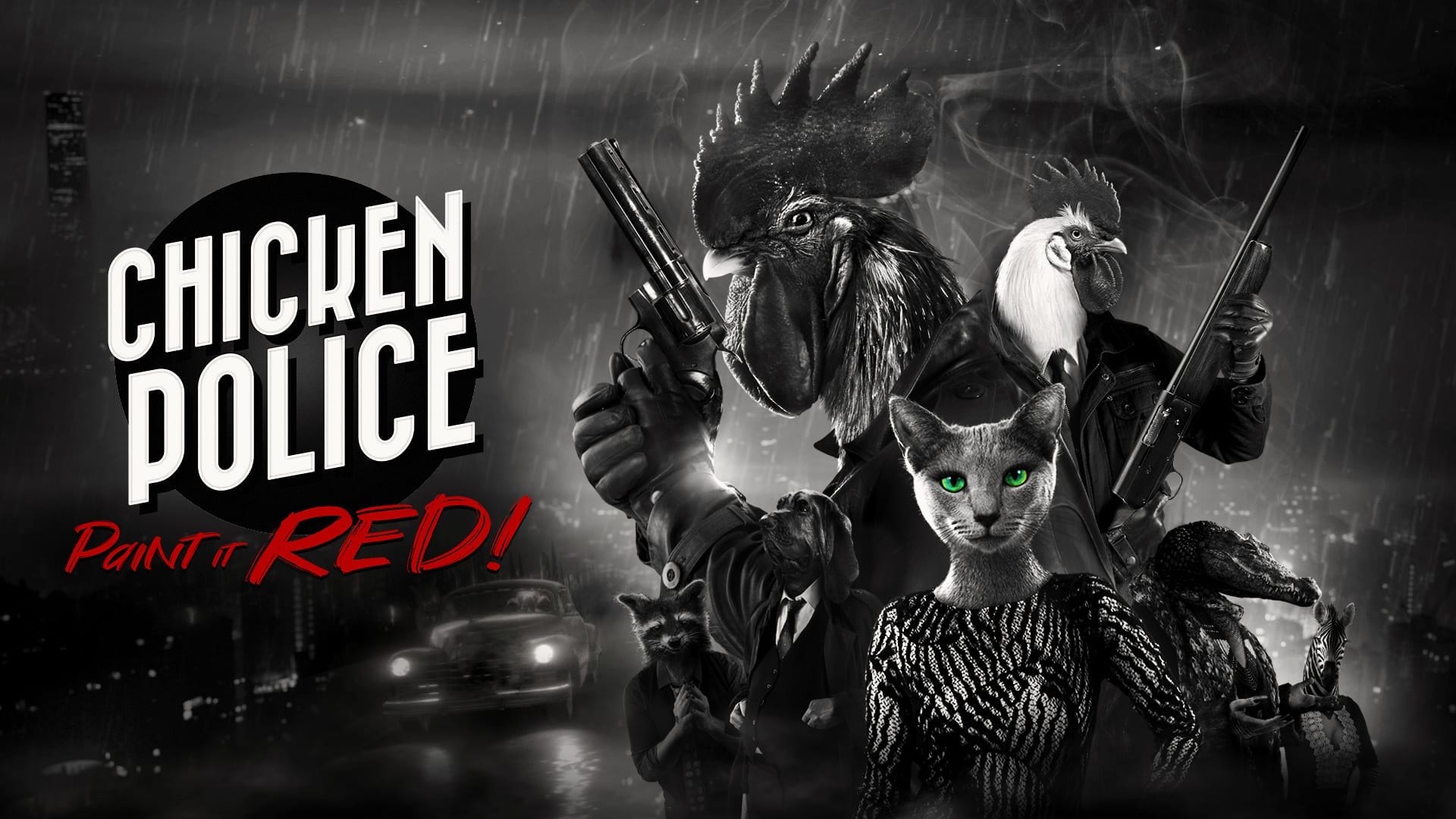 Since its announcement trailer earlier this year, I’ve been bewildered by the newly-released Chicken Police. It dragged me in with its ‘peck-uliar’ film noir-style story and hair-raising half-human/half-animal character design. I had to know – just what IS this game?

Well, I knew the basics:

With its gorgeously striking black-and-white visuals, its stylish pops of blood-red and its ‘eggciting’ story, is Chicken Police: Paint It RED! all it’s ‘cracked’ up to be, or a ‘poultry’ offering?

The Story of Chicken Police

A stylish drama swept in darkness, The Wild Gentlemen’s Chicken Police wraps you up in the luxurious drapes of discomfort.

Sonny Featherland – half of the legendary Chicken Police who used to rule the roost – is the stereotypical ‘hard-boiled’ protagonist you’d expect from a gritty point and ‘cluck’ murder mystery.

With only 121 days left until his retirement, Featherland, alongside his old partner Marty MacChicken, is reluctantly thrust into the grimy underbelly of Clawville, a typical seedy gangster city that you’d find in any great noir film.

Spinning a tale of blackmail, murder and Femme Fatales, Chicken Police begins like the great detective stories of old. The damsel in distress, Deborah Ibanez, breaks into Featherland’s dimly lilt hotel apartment on the eve of the New Year. With doe-eyed sincerity and secrets aplenty, she begs Featherland to investigate a series of increasingly prominent threats against her mistress, Natasha Catzenko. Catzenko is a singer at the high-end Czar Club, and the girlfriend of infamous rat gangster Ibn Wessler.

After Ibanez delivers a hand-written note from Catzenko that mentions Featherland’s estranged wife, Molly, we learn more about Featherland’s tenuous relationship with his ex-partner, Marty MacChicken, the other half of the Chicken Police duo. The only problem is, the last time they spoke was a New Year’s Eve, long ago, when Marty shot Sonny.

This wonderfully classic noir story takes inspiration from only the very best: The Maltese Falcon and The Big Sleep leapt into my mind multiple times whilst the story unfolded through the lazy drawl of Featherland. As you explore the scene by clicking an item or investigating a character, you can almost feel the spirit of notable Noir author Raymond Chandler inhabiting the strange humanoid chicken head.

As the narrative develops, Featherland breaks out the keen detective eye. Using the point-and-click mechanic, you can easily explore a crime scene for interesting tidbits of information and pick up clues to store in your inventory. The clues you find influence the lines of inquiry – talk might be ‘cheep’, but it’s the backbone of Chicken Police: Paint It RED!’s gameplay.

The ‘Interrogate’ function launches a mini-game, where you can question characters on their ‘fowl’ play. Featherland breaks the fourth wall to tell the player about their victim’s dominant personality trait. Depending on this attribute, you must tailor your questions to match it. Unfortunately, the questioning is probably the weakest part of Chicken Police, which is a shame, for a mystery game.

There were many times during the interrogation scenes when I wanted to know more about a certain detail, but asking lost me points. This clipping of curiosity goes against the very point of the mystery genre, so I never felt like I could properly get invested in the answers I got. Another issue I found was that the suspect’s characteristics were very vague, so it made it hard to link them to a specific question. I don’t expect a murder mystery game to be easy, far from it, but it’s important to be able to look back and see a pattern. Often, these answers seemed to be selected from random, which is an issue.

This would be okay if the narrative points were summed up neatly and cohesively. Unfortunately, I struggled to fathom the stereotypical detective’s corkboard that displayed the animals and clues I’d found so far. Chicken Police falls into the common trap of hiding the truth behind impenetrable ‘cop-speak’. I ended up throwing everything at the board and seeing what stuck, rather than actually piecing the information together using my brain.

The Noir cutscenes and conversations in dingy locations are absolutely stellar, but the puzzles and minigames in between can be hit or miss. Things like zipping up the dress of a naked cat after visiting her in a brothel feel unnecessary – I’m appreciative of the importance of lust in a 1930’s noir world, but this just feels gratuitous, even for the time.

Let’s Talk About the Style of Chicken Police

My first foray into the world of noir was the crime anthology film ‘Sin City’, produced and directed by Frank Miller and Robert Rodriguez in 2005. I had to look up the date for that, and wow, I feel old. I’m only 23, but wow, that feels like a lifetime ago. Anyway.

I studied noir at college, writing papers on the style, conventions and lighting of the classics. Chicken Police, with its sparse use of colour and striking chiaroscuro, is up there with the greats. It’s honestly one of the most stylish indie games I’ve ever played.

Whilst the world may be plunged into black-and-white, the game is packed with colourful characters and dialogue that bring Clawville to life.

One thing I particularly love about the graphics of Chicken Police: Paint It RED! is the combination of 2D and 3D rendering. The blend of actual photos and realistic backgrounds jar against the freakish ‘Avian Attorney’ style characters. By all accounts, it shouldn’t work. But it does.

The Jazzy Vibe of Chicken Police

Picture this. You’re sat back in an ornate jazz lounge, melancholic trumpets and soaring piano notes echoing softly around you. You recline, swirling rich amber whiskey in a crystal tumbler, before taking a sip of the smooth liquid.

Oh, and a half-cat/half-human slinks around seductively on stage. Of course.

The soulful score of Chicken Police perfectly encapsulates the vibe of film noirs legends. It’s perhaps one of my favourite parts of the entire game.

This is probably the best time for me to mention the incredible voice acting as well. For a game that relies so heavily on its narrative and its unique characters, voice actors are some of the most critical factors. Serious credit to voice actor Kerry Shale – the tired drawl of Sonny Featherland might be one of the best pieces of voice acting I’ve ever heard in a game.

Is Chicken Police Fun to Play?

A recent complaint I’ve had with video games is that they’re simply just too long. Games, especially AAA releases, seem to subscribe to the model of thinking that ‘money spent’ must equal ‘hours played’. Games that leave you wanting more are a rarity nowadays. Chicken Police: Paint It RED! is one of those games that don’t NEED to be longer – it has a goal in mind, it leads the player to that goal, it’s done. It can be finished in seven or eight hours and it’s some of the most fun I’ve had playing a game this year.

If you want to know more about the incredibly detailed world The Wild Gentlemen have built, you can complete the Codex section of Featherland’s notebook. This is a masterful way to flesh out the world without distracting from the main story. My only complaint is that they’re almost TOO easy to miss – if you’re not paying close attention to your notes, you’ll miss them. But on the other hand, this makes the details feel exclusive, so it’s not a negative point by any means.

As someone who needs subtitles on everything they watch, the fact that subtitles are on by default is a welcome feature. I would’ve like to see an option to change the colour and sizing for ease of visibility, but the high contrast and aspect ratio of the action sequences makes them easy to read for the most part.

However, the notebook is laid out in a confusing way, and the chicken-scratch handwriting is impossible to read at first glance. This means you have to select each hint and read it in a pop-out window, which can be time-consuming.

Furthermore, I frequently skipped over key pieces of information in dialogue, because as soon as you press a button, the dialogue moves on and there’s no option to go back. For people who struggle to process information quickly, this is an oversight that would’ve been nice to see.

Is Chicken Police Worth Your Money?

I have to admit, when I asked to review this game, I thought it’d be a joke. I didn’t think I’d end up with tears in my eyes and a new favourite indie game of the year.

It’s refreshing to play a game that is so tongue-in-cheek about its own ridiculousness. The Wild Gentlemen’s Chicken Police is wonderfully self-aware, expertly handling adult tones like swearing, murder, economic crisis and brothels in a mature, yet never dull manner. When the narrative introduces plot points like insects selling their larvae to fine dining establishments as starters, corruption on the police force and murder rife in the streets, I can’t help but admire how the storytelling never chickens out.

Whilst some of the minigames may drag the pace down, the incredibly stylish visuals, next-level voice acting and brave narrative stand out. Chicken Police: Paint It RED! is one of those indie gems that deserve to be at the top of the pecking order.

GameByte was supplied with this review code for Nintendo Switch.