The last few years has seen a wave of cyberpunk games enter the market and it can be hard to distinguish the bad from the good. Disjunction is a game that aims to put a new spin on the genre, by combining stealth-action with RPG and pixel art. But does it hold up? Here’s our review of Ape Tribe Games’ debut game, Disjunction.

Disjunction is set in a futuristic version of New York. It’s your typical cyberpunk setting. Crime gangs, drug epidemics and violence run rampant, and three characters are connected in the middle of it all.

The game introduces the first playable character, Frank, with a telephone (or terminal) call. I’m a big fan of games that allow you to paint a picture of the protagonists through the gameplay and what people say, rather than giving you a ton of backstory at the start. Little things like seeing characters call each other by nicknames can instantly tell you they’re friends for instance, without the need to say so.

However, sometimes the way this can be worded is a bit clunky. With three characters who all know people and have their own goals in a world that’s full of complexities, sometimes dialogue feels a bit stiff. When characters drop lots of information it can sometimes feel unnatural. The game does try to help you out though. Important people, places and corporations are highlighted in orange which you can hover over for more information if you need it, and this does help smooth it out.

When I booted up the game for the first time and saw the art of the main menu, immediately I was like “Man, this is gonna be good!” Straight into the first cutscene I was already mesmerised by the quality of the art.

Disjunction’s gameplay revolves around stealth levels that can be in any number of places, from warehouses to swanky apartments, and the art delivers every time. Detailed pixel art mixes with radiant lighting effects to create a stunning aesthetic that really sells the cyberpunk vibe. The pixel art also successfully conveys potential dangers in levels with warning animations on traps, and vision cones on enemies (although these can suddenly widen depending on the angles, which can feel weird and catch you out at times).

Disjunction is also a very well polished game. I have only seen one minor bug (where alerted enemies can get stuck walking into walls) but otherwise the game has been really smooth to play.

Disjunction uses a system in which you move a sprite of your player character around the screen with the arrow keys. Your mouse moves the camera to allow you to see further in a direction than a locked camera would. This was jarring for me at first, but as soon as I got into the stealth gameplay, I immediately felt at home. This control scheme is core to the game’s stealth mechanics, and it fits really well, allowing you to safely scout and plan your approach which is something you definitely need to make good use of.

Disjunction’s gameplay loop revolves around stealth levels. You have to get from one side of a level to the other (usually across multiple floors) to get some info, or find someone at the end. You can choose to go full stealth, all guns blazing or a bit of both, but no matter which approach you take, you always need to scout ahead and plan, as you have limited resources to make use out of.

Every character has a weapon; ammo is limited but you can gain more by collecting pickups dropped by enemies. However, shoot when there’s multiple enemies around and you will be heard, so it’s not always a viable option.

That’s where abilities come in. Each character has three abilities and a passive to help you through missions. These each cost energy to use, and you only have so much to burn through so you have to think about when to use them wisely (though you can find pickups to refresh these as well). These abilities vary from stun and smoke grenades, to invisibility, health regen and dashes depending on the character. Each protagonist has a unique playstyle encouraged by the abilities they have, while the abilities themselves are fun to use, even if you have to use them sparingly.

You can find upgrade kits in levels that you can trade for bonuses to make your abilities more powerful, and you can choose to upgrade the ones that suit your playstyle best. You can also pick talents with the EXP you earn to increase your general stats, like attack speed, defence, health etc. This also allows you to specialise gradually into a lethal or non-lethal playstyle.

In terms of difficulty, parts of levels can vary from really easy to really tough, and it’s often quite random as to where these difficulty spikes can be. There is a checkpoint system in the form of panels that you walk over, but there’s usually only around two to three per level and these are often spaced quite far away. With the way that some levels are designed to have multiple routes to take, you can end up missing them altogether sometimes. This can often lead to chains of frustration as you have to repeat the same parts of a level over and over, often screwing up more with impatience. It can feel really bad to keep losing over and over like this, stuck in a repetitive loop, when all you want to do is advance the story. This is especially true when you finally get past that one part in which you were stuck, only to die right afterwards in another part, and have to repeat them both.

You have to be careful with checkpoints too, because if you activate one, you carry over any missing health or energy. You often end up having to force a level restart if you make it to a checkpoint but with minimal stats left.

Despite this though, I kept finding myself coming back, even if I had to stop playing for a bit. The gameplay is definitely as much fun as it is frustrating and it feels rewarding to finally get past levels that were causing you a lot of trouble. Just be prepared for a brutal experience at times!

Remember what I said about the art? I immediately knew the sound was gonna be good too.

The music has this way of really setting the tone, but without being overpowering. I’d describe it as adding an air of sombre mystery with a touch of hopefulness. But it can also ramp up at times, especially in some of the later levels, which can really help create a sense of urgency in a game that, really, requires patience to play.

Sound effects are also used well to help enhance the gameplay experience. You can hear the noise of robots and footsteps and you hear when an enemy has been alerted. All of your abilities have different sounds when used. Sound in general is just used really well to help communicate to the player what is going on.

As far as accessibility goes, extra features are limited; you won’t find colour-blind modes in Disjunction. All dialogue takes place in text only, so it forgoes the need for subtitles. Important words are always highlighted in orange to help players pick out the most important parts of what is being said, and these words can be hovered over anytime for additional information.

There are no subtitles for sound effects, but there are usually clear indicators on screen when something happens, such as question marks or exclamation marks for alerted enemies, and animations when attacks are happening or abilities are being used. No sound would mean making the game slightly harder, but it should still be able to be played this way. 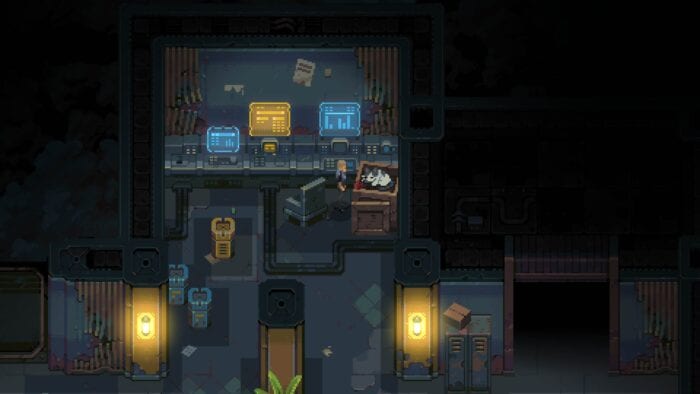 Overall, Disjunction is a fun, cyberpunk stealth game, with beautiful pixel art and great sound that is more than worth its price tag. Be prepared for some difficult levels and many moments of frustration, but enjoy basking in the glory of your successes at the end, whilst you enjoy an intriguing story in a dystopian world.

Side note: You cannot pet the cat in Disjunction. But you can project a fake one!