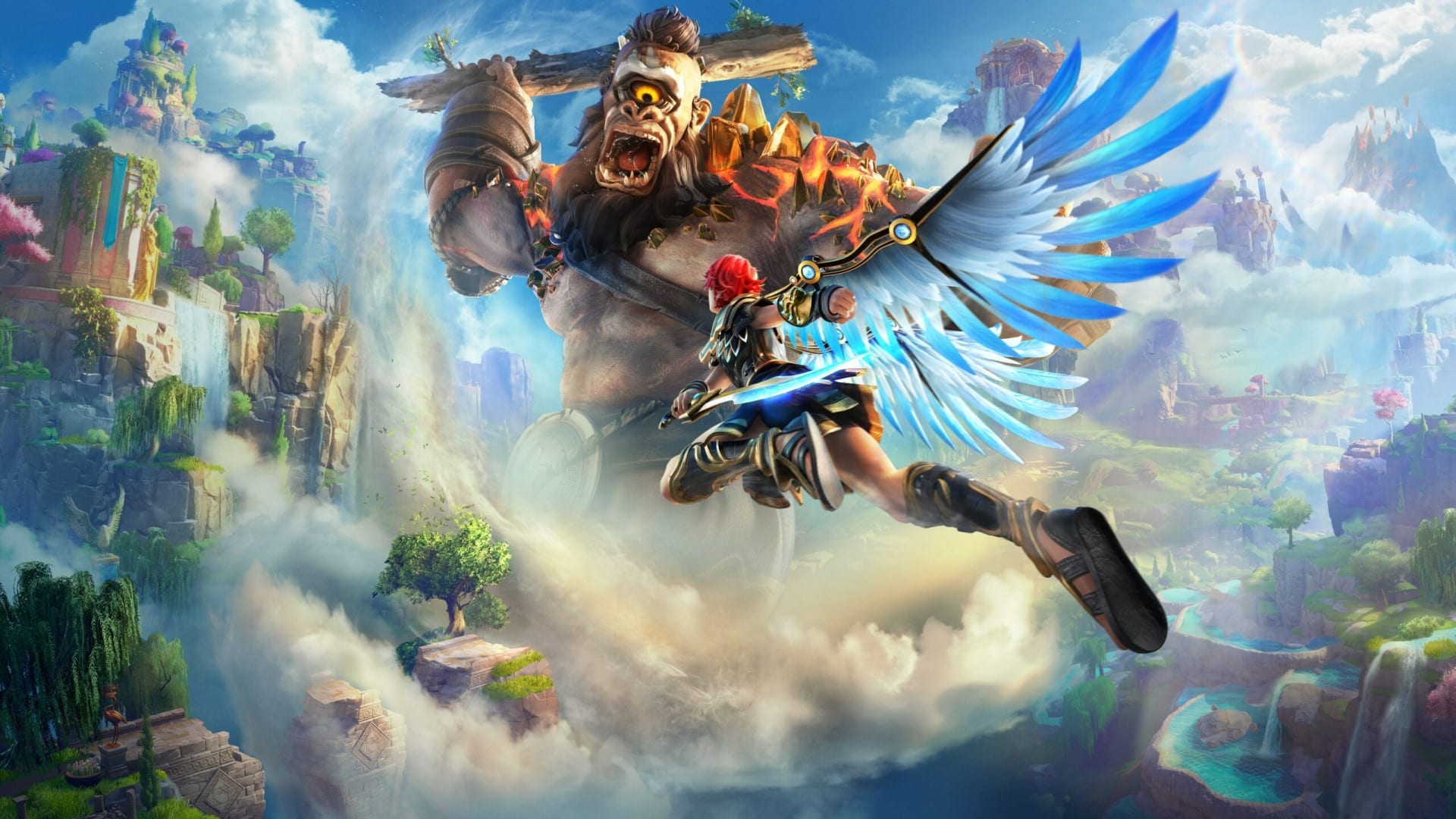 Immortals Fenyx Rising is a brand new game from Ubisoft. At times it may feel a bit familiar, as it wears its influences on its sleeve. Yes, it’s similar to The Legend of Zelda: Breath of the Wild. It’s a comparison everyone has made and it’s something worth getting out of the way in this review early on.

Even though it leans heavily into its inspirations that doesn’t make it any less of a game. Immortals Fenyx Rising is a wonderful experience in its own right if you’re willing to give it a chance.

Tell Me a Story

The way Fenyx Rising tells its story is quite interesting. Set in a fantasy-like ancient Greece the terrifying Typhon has been freed from his prison. He has a goal and that is simply to destroy Zeus and reclaim the throne of Olympos.

Things occur and Zeus finds himself looking for help from Prometheus. Prometheus decides to use this to his advantage, as he is currently chained at the top of a mountain. So the story begins to be told of Fenyx, the titular character.

Rather than having all of these moments told through cutscenes a lot is told via narration during exploration by Prometheus and Zeus. Zeus is brash and comes across as not the most likeable person. A depiction that is fairly accurate to the source material. He adds humour to the storyteller like ways of Prometheus. It keeps everything light and means that exposition can take place without breaking the flow of the game.

Along the way, you’ll also encounter other characters that help add layers to the world and also educate you further in Greek mythology. The open-world nature of the game means that this can be done in a non-linear fashion.

Enemies kind of hint at how easy an area should be but, if you grow skilled enough in combat or running away, you can still unlock most of the world map in the first few hours of the game and encounter a variety of characters.

The characters and story are fun. The writing can be slightly cringe-inducing at times but there’s still plenty of decent jokes in there and likeable characters. All of this presented in a fairly family-friendly package.

The gameplay in Immortals Fenyx Rising is one of the huge positives of the game. Combat is addictively fun, especially as you level up Fenyx. You use your axe as the primary weapon to chip away at an enemy’s stun meter, which leaves them open for a flurry of attacks with no fear of getting hit. Axes are slow though and using your sword can deliver faster attacks and get you away from harm when taking on quicker enemies.

Tie this in to using your arrow and dodging at the right time to initiate a slo-mo effect, which opens enemies up to even more attacks, and you’ve got a very satisfying combat loop. There are lots of special attacks you can unlock too and, if all else fails, you can just throw a rock and other items at your foe.

It’s not just combat that the game gets right though. Exploration is some of the most fluid I’ve experienced in an open-world game. Climbing up to a high point to scout out the area before leaping off and gliding to the floor and seamlessly summoning your mount at the same time to start galloping away means it’s easy to traverse the world of Fenyx Rising.

You can find points of interest by using a viewfinder and tracking down things such as chests, health boosters and even vaults. Vaults take you to areas away from the open world and can be full of puzzles, battles and even rare items. Hunting down points of interest is fun in itself and the haptic feedback on the DualSense helps guide you to each one. You can’t find everything by climbing one point either so if you want to find everything, prepare to explore.

There’s so much to do in Fenyx Rising and that’s one of its strengths. Even if the story doesn’t hook you exploring the world is fun. Its use of puzzles is great too. There are many repeating types but with enough variety in them to keep things fresh and often multiple ways to find a solution.

There are issues with the Fenyx Rising though. Boss characters in the open-world seem to have a small area you can fight them in. Wander too far and they’ll reset, even if they’re near you if you can’t get back fast enough.

Another problem is that sometimes it tries to do a bit too much. It constantly bombards you with giant text boxes to tell you that upgrades are available. Luckily you can turn this off in the options but it does lead on to the other issue. The hub area.

Without spoiling what it is in the area you can upgrade various things there. This includes your appearance, weapons, health and more. You can also take on some timed challenges and purchase items.

The problem is the area is just a bit dull. It gets a bit more interesting once you progress through the story but, for the most part, it just feels like a hub area for the sake of it. Not only that but, because you have to go back there to level up, it can break the flow of exploring, especially if you’re nowhere near a fast travel point.

Immortals Fenyx Rising has a nice style. The PS5 makes it pop with its draw distance, especially when you’re up high. Being able to look across the entire island and see nearly all the different areas at once is lovely. Especially because each of the areas has its own theme. Thanks to this it means that each area has variety, even if it has similar enemies.

Multiple times I found myself sitting atop a mountain or high area just enjoying the beautiful horizons of the game. There’s even a reasonably versatile photo mode. It’s far from the best in gaming but you can still get some lovely shots.

On the PS5 you have 2 options on how to play your game. Quality mode or Performance mode. For the majority of my review, I played in Performance because it made the game much more fluid to play and still looked great. Also partly because Quality mode just feels… terrible to play the game in.

It makes some things a bit shinier and a bit prettier but the dip in frame rate makes the game feel clunky and unenjoyable to play. It’s something that may be continued to be worked on via a patch in the future but right now it’s a setting that hinders the game more than it does show it off.

The cartoony style of the character models look nice in both modes and it really captures the aesthetic the game is aiming for. Family-friendly, with a little bit of an edge. It complements the humour and story of the game well.

Immortals Fenyx Rising lets you customise the experience in a huge variety of ways. From the graphics vs performance mode mentioned previously to altering the level of assistance, you get in puzzles.

There’s such a huge level of thought that has gone into making Immortals Fenyx Rising a game that is not just fun for a huge range of people, but accessible to them too.

Using it for puzzle solutions works well and doesn’t up the flow of the game much at all. Subtitle sizes offer a larger option and there are colourblind settings too. You can read more about the accessibility options in the game here.

Immortals Fenyx Rising feels like a wonderful fusion of Breath of the Wild and Assassin’s Creed, as well as other Ubisoft open-world games. Moving around the world is fluid and combat and exploration are very satisfying. Graphically it’s far from a powerhouse but it’s got a nice aesthetic that still makes it look good.

The sheer amount of things there are to do in the game means it’s something that will keep you entertained for a long time if you click with it. If you’re a fan of open-world adventures that don’t take themselves too seriously and have fun combat and puzzles then Immortals Fenyx Rising is a game you’re probably going to love.