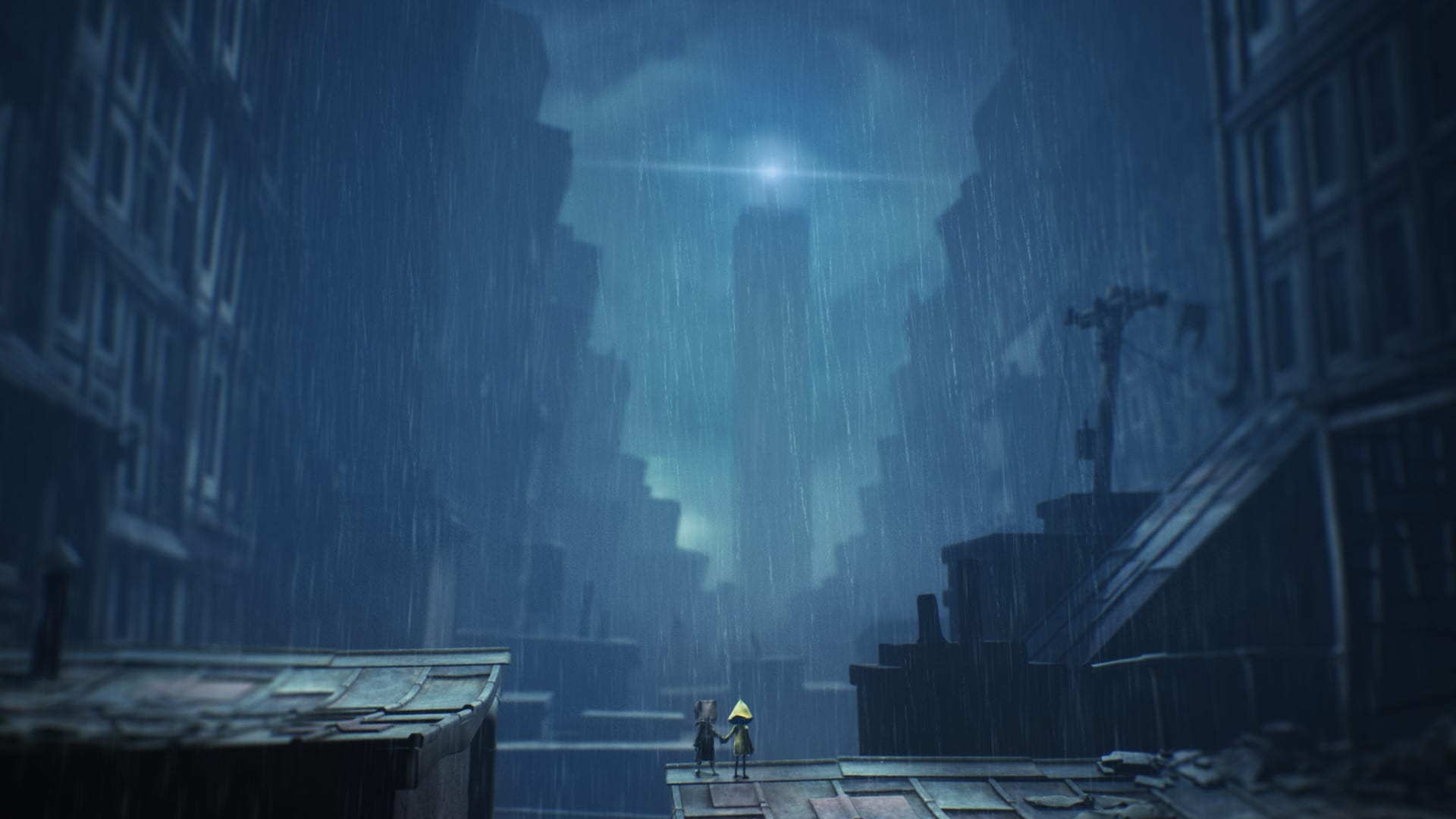 I’ve been excited for the release of Little Nightmares 2 since it first got announced back at gamescom 2019. I enjoyed the first game, but I was keen to see where the story could go with another. I’d hoped the sequel would be good, but I didn’t expect it to blow me away. Boy, was I surprised. Here’s our review of Little Nightmares 2.

If you played the first LN, you’re probably aware that the game favours more of a vague approach to storytelling. While the story beats are laid out as you traverse the Maw as Six, it’s kind of up to you to interpret the events as you choose. The lack of speech and lack of clear story made the first Little Nightmares pretty special as it allowed for your own interpretation, but Little Nightmares 2 ramps it up by about a million.

I’m not going to go into the story too much here for the simple reason that I was blown away by the ending, and you deserve to be too. If you enjoyed the first game, the story of Little Nightmares 2 will shock you to your very core. However, getting to the ending is a little slow. Not much happens (story-wise) between the beginning and the final act, which is probably what makes the ending so memorable.

You play as new character Mono this time around. You and Six are escaping from an array of twisted and terrifying beings as you solve puzzles, sneak around and run like all hell. The final act of the game packs in a surprising amount of story, and while this type of pacing isn’t ideal for most games, it places a reliance on gameplay for 85 per-cent of the game. It makes the twist that little bit more shocking, and it’s totally worth taking the time to get there.

I played Little Nightmares 2 for PS4, but I played it through my PS5. According to Bandai Namco, this means that I’ll have seen better resolution and reduced loading times, as least in comparison to base last-gen consoles. Having not played on PS4, I can’t attest to this, but it definitely loaded very quickly.

Although the original also released on PS4, the sequel looks worlds away from its predecessor. There’s more depth to the levels and more exploration possible. The characters (especially the enemies) are incredibly detailed, showing off all the lumps, bumps and bruises like never before.

Style-wise, Little Nightmares 2 still looks like a Tim Burton nightmare come to life, though there’s still a definite lean on Japanese horror here too. It’s, in a word, gorgeous. I’m a big fan of cute horror, and this game falls right into my aesthetic. “That’s so creepy, I want to have a picture of it on my bedroom wall,” was my general reaction to almost every enemy and every new setting. Where Little Nightmares was maybe too bright and grotesque, LN2 is more cold and chilling. The two games are different, yet similar – the perfect recipe for a sequel.

Sound design in this game is nothing short of perfect. Everything from the satisfying menu button sounds to the creepy music, footsteps, and even the “‘oof’-and-thud” of characters after jumping from a great height, is all flawlessly executed. Play with headphones if you don’t have a decent sound set-up (and thank me later). But we’ll talk more about that shortly…

Gameplay in Little Nightmares 2 is pretty much what you’d expect. It’s still a puzzle-platformer, and it still works mostly as a side-scroller (with a few notable exceptions). Playing as Mono, it’s up to you to solve puzzles, climb boxes, locate keys, and run really fast to get to the next area. There’s also combat this time around, with Mono being able to wield weapons like pipes. As you’d expect from such a small being, these weapons are heavy, cumbersome and slow. Having to use them is pretty difficult, and it takes a lot of getting used to.

Little Nightmares 2 also adds some other new mechanics, but these are so fun to discover and figure out for yourself, that I won’t be going into detail here.

Gameplay is solid and fun, but it’s very, very difficult.

If you thought Little Nightmares was a tough game, may I say “ha-ha, play Little Nightmares 2.” The game is incredibly tough in places, requiring speed of movement, quick thinking and even dual stick controls at points (something I really struggle with, thanks brain). Bandai Namco has said the game is six to eight hours long, but my playthrough took me closer to 10 hours due to the sheer amount of deaths I suffered. Thankfully, LN2 is excellent with its respawn points. There were just a couple of instances where I died and ended up pretty far away from my death point. Usually you’re reinstated just a second or two away, so at least you don’t have to repeat whole segments (mostly).

While the difficulty level of Little Nightmares 2 is definitely up there with some of the best, it’s satisfying to work through. Admittedly, I did get close to rage-quitting a couple of times, and oh wow is the last boss scarred into my brain for life, but the overall gameplay experience is more than worth the trouble. If you struggle with hard games, this might be a no-go, as it definitely pushed me to – and sometimes past – my limit.

Little Nightmares 2 is incredibly well crafted from its sound to its puzzles, and you can’t help but marvel at what a polished experience it really is. It’s really hard to say Little Nightmares 2 is a “fun” experience, but it’s a memorable one. It’s one I haven’t been able to get out of my head since I completed it (probably thanks to THAT ENDING). Did I enjoy playing the game? Well…at some points I wanted to throw my DualSense at a wall, but other points were so wonderfully exciting, wholesome or disturbing that I couldn’t help but be wowed by them. It may not be a “fun” game, but it’s sure as hell an entertaining and satisfying one.

Now here’s where it all falls apart a bit. The accessibility options in Little Nightmares 2 are almost non-existent, with the settings only giving you a chance to change volume, language and brightness.

Subtitles simply do not exist, and while I appreciate that none of the characters speak, having written descriptions of some of the audio cues would make LN2 a much better experience for those who play without sound. Some sections of the game have a heavy reliance on sound, and not being able to be aware of this will be a huge problem for some players.

Bandai Namco itself notes in the review guidelines: “there is one puzzle in particular which will be easier to solve with sound cues.” Having now completed the game, I can’t see how this puzzle will be be solved without sound cues. Again, this means players with hearing issues are being excluded.*

As mentioned, this is a difficult game, but there’s no option to scale the difficult or select an Easy Mode. Again, this is alienating a lot of players.

While the topic of Easy Mode is still hotly debated, I’d at least expect Bandai Namco and Tarsier to patch audio description subtitles into the game in the future. The accessibility options are so poor that it means I just can’t rate the game any higher.

*UPDATE: Since this review was published, Bandai Namco PR has reached out with some clarification. According to the developer, there is a visual cue for the sound-based puzzle in question: “When a wrong door is entered, there is a grey glitch. When a right door is approached there are some particles going from Mono to the door.” This was not immediately obvious during my time with the game, and could easily be missed by players.

Should you play Little Nightmares 2?

So should you play Little Nightmares 2? The short answer is yes, if you can. It’s an incredibly well-crafted game that immerses you in a bleak and devastated world with only your friend for company. Its heart is almost as big as its pitch-black soul, and if there’s such a thing as “terrifying charming,” this is it.

The storyline (once it kicks in) is something that’s sure to appear on “WTF gaming moments” lists for years to come, but probably make sure you’ve played the first game if you want it to have its full impact.

There’s some concern for me that the incredible ending will be missed by many simple because of how difficult the game is. Having more noticeable story threads throughout the game might have encouraged players to fight through until the very end, but I suppose having a more tangible story throughout might also have made the ending less shocking. It’s kind of a catch-22 here.

Little Nightmares 2 is probably the closest I’ve come to giving a game a perfect score in a long time, but the accessibility options are just too disappointing for a flawless rating. There’s going to be people out there unable to enjoy this fantastic game, simply because they weren’t able to change the settings or because they have hearing issues, and that’s a big oversight. (EDIT: Even with a visual cue for one sound-based puzzle in particular, accessibility is definitely not at the forefront of this game). Everyone should be able to play this game, and right now, that’s not possible.

If you enjoy dark stories, difficult gameplay and the original game, Little Nightmares 2 is absolutely a must-play dark fairytale that you shouldn’t miss out on (if you can help it)! LN2 is a triumph for Tarsier Studios, but definitely needs to rethink accessibility.

Little Nightmares 2 releases February 11 on PC, PlayStation 4, Xbox One and Nintendo Switch. Xbox Series X|S and PS5 versions will be coming later in 2021.