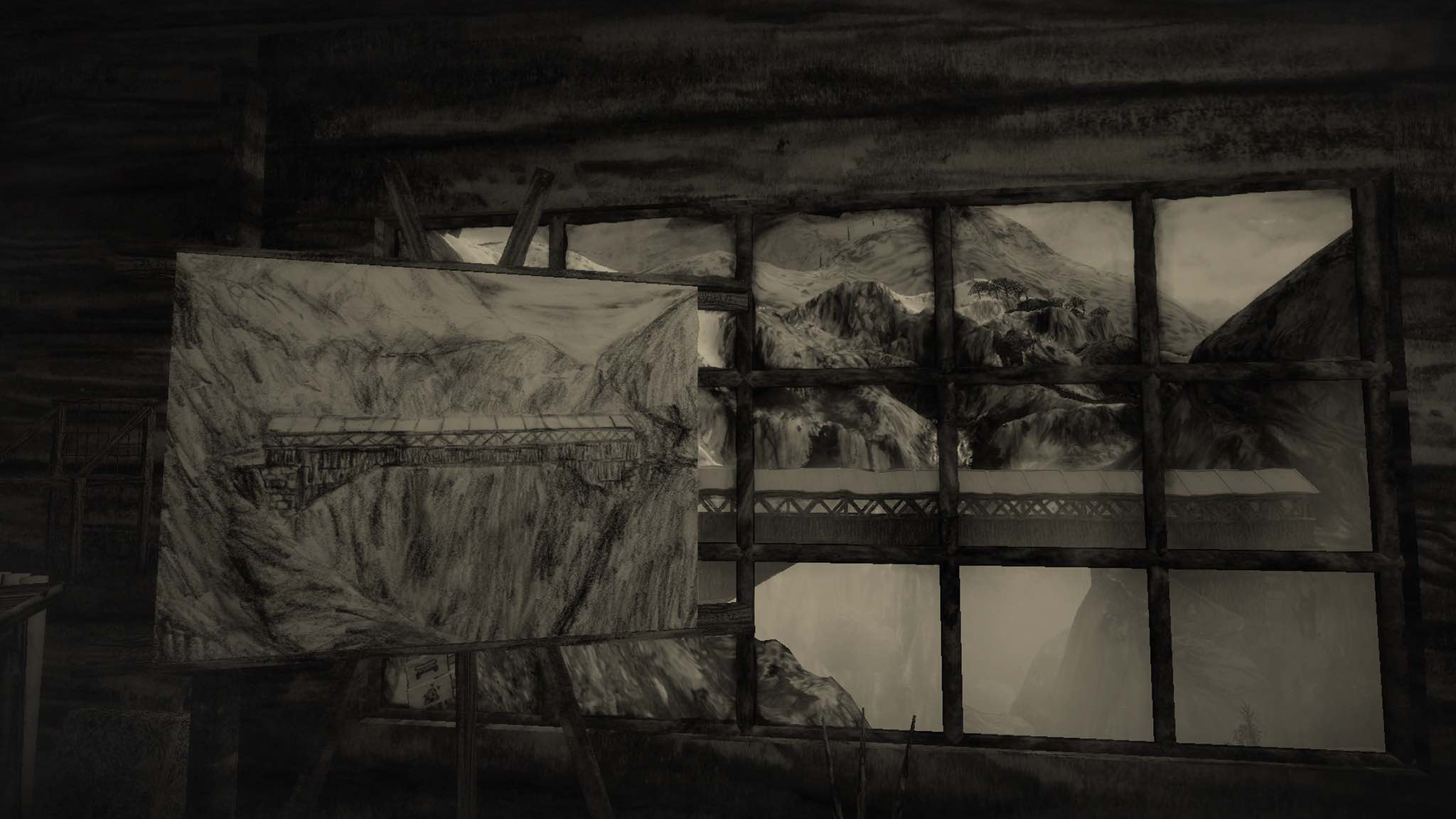 When it comes to horror games, it’s easy to get things wrong. Even games that get it right tend to tread on the toes of titles that came before them. Mundaun is of a different ilk. Perhaps one of the most unique and beautiful horror games I’ve ever played, Mundaun sets a new standard for what a horror game can – and should – be. Here’s our review of Mundaun, played on Xbox Series S.

Mundaun is a tale which is about as close to folklore horror as you can get. You play as Curdin, who’s revisiting his hometown of Mundaun in the Swiss Alps, following the death of his grandfather. Suspicious about the fire which supposedly took his grandfather’s life, Curdin explores the sleepy town, unravelling a mystery which will stick with you for years to come. (Don’t worry, I’m not going to spoil anything here).

While the initial pitch might seem like every other horror game you’ve ever played, Mundaun’s narrative is almost wholly unique. What we’re given is a story of family, curses, and local lore. It’s something to behold, especially for fans of historical wartime stories.

I could harp on about the style of Mundaun all day, because…well…look at the thing! Perhaps the most unique thing about this game is its art-turned-to-life aesthetic, created by the game’s (mostly) solo developer, Michel Ziegler.

Ziegler created the world of Mundaun by lovingly drawing every asset by hand, before wrapping his work around the 3D models created for the game. The result is a massively personal landscape which works perfectly with the game’s focus on folklore and history. You feel like you’re walking through a storybook (or, I suppose, art book), and it’s very easy to immerse yourself into this world in a way you don’t usually get to experience with more realistic games.

I took a number of screenshots of the game which turned out looking like pieces which should be in the Museum of Modern Art, and that’s without a dedicated photomode. When it comes to beauty, it doesn’t get much more special or charming than Mundaun’s landscapes and worlds. Oh, and keep an eye out for Easter eggs while you’re snapping screenshots. A sinister figure is watching you, and you might just catch him in places you might not expect.

Speaking of, let’s not forget this is a horror game. Somehow, Ziegler’s fantastically crafted world manages to be both enticing and horrifying. Enemy designs are downright terrifying, while the colourless world also seems to cause its own natural, existential dread.

While exploring the mountains can be beautiful, exploring the claustrophobic buildings and bunkers caused me more anxiety than I thought was possible from a video game. The way the world design and style lends its own horror to the experience is nothing short of masterful. You should experience this game just for its atmosphere alone.

While I always pay attention to sound when reviewing a game, it’s rarely as pronounced a thing as in Mundaun. Sound is given just as much love as the art style. Keys jangle as you run if they’re in your inventory, staring at paintings will reproduce their sounds in your ears, and you’ll be alerted to enemies if you listen carefully.

Aside from the incredible sound design, it’s also important to mention the voice acting. Voice acting in this game is incredibly well done, especially when you consider the language used. Mundaun’s characters speak in Rumantsch, a very obscure language used only in some regions of the Swiss Alps. The voice actors do an incredible job at bringing the language to life, and it adds another layer of authenticity to the game.

Gameplay of Mundaun is pretty much what you’d expect from a first-person horror game. The majority of the game comes down to fetch quests and exploration as you delve further into the mystery you’ve found yourself a part of. Mundaun features a few fairly simple puzzles, but nothing too mind-boggling.

You also have some combat abilities, with the option to attack your enemies with things like a pitchfork, or later, a rifle. There’s also some driving and sledding in the game, both of which have smooth and easy controls.

There are three depletion meters you’ll need to pay attention to when it comes to looking after Curdin. Taking care of yourself in Mundaun is important, with a big emphasis on the slow-paced nature of the game. Drinking coffee (which is slow but satisfying to brew) will replenish you. You’ll also have the opportunity to improve your combat skills. Finally, eating also plays a part in this game. These three statistics are recorded in your journal, so you can keep an eye on your stats at any time.

Combat is stiff and clunky, but this doesn’t come across as frustrating at any time. Again, it’s a way in which the game prides itself on authenticity. You’re no Chris Redfield, and it makes sense that you’ll need to build up your gun skills before you can land a decent shot with your rifle. While some might find this frustrating, I found it to make perfect sense within the world of Mundaun.

Is Mundaun fun to play? Absolutely…if you don’t mind the stress. After my first session with the game I was more eager to dive back in than I have been with any other title of the last six months. Something kept my mind in Mundaun, and I can only assume it’s the game’s incredible attention to detail and realism that really got me eager for more.

Some of the later sequences can drag a little, and the gameplay does start to get repetitive at points. However, talking goat heads, chair lifts, sledding and driving keep the monotony from getting too much.

That stress that I mentioned? Yeah, that comes from the incredible tension this game manages to create. Every step forward keeps you suspended with tension, which might be a little much for new horror gamers. We do get the occasional jumpscare, but you can count them on one hand.

For once, we have here a game which uses jumpscares wisely. They provide a much-needed bit of context to break the ever-building tension. One particular scene in a bathroom may have scarred me for life, not because of a jumpscare, but because it struck something very personal in my very core. This is a very well-crafted game which will play on your worst fears – if you let it.

Sadly, Mundaun is lacking in accessibility options. The game uses subtitles throughout, though there’s no option to change size or colour. The game’s unique art style might also be difficult for some players who struggle with colour differentiation. You can, however, scale the difficulty of enemy encounters.

Interestingly, when my partner saw snippets of my playing, he was struck with motion sickness, perhaps due to the art style. Motion sickness usually affects me, but I had none of it with Mundaun. If you’re sensitive to motion sickness, you might want to check some playthroughs of Mundaun before deciding to purchase it yourself.

Mundaun wasn’t all horror of the good kind though. I did encounter a game-breaking bug which left me unable to progress. I hadn’t completed a particular puzzle in the grandfather’s study, which led to me being unable to enter the room again. The developer has assured me that this is a known bug, and that it’ll soon be patched out.

Normally, game-breaking bugs will affect our scoring, however, Mundaun’s save mechanics mean that any bugs you might encounter won’t be the end of the world.

Mundaun saves in individual slots, meaning that while the bug lost me some gameplay, I was able to go back to a recent save. With this failsafe built into the game, it’s hard to judge a bug. However, it’s still worth noting that if this wasn’t part of the design, the bug I encountered would have cost me my whole playthrough so far. Hopefully the patch isn’t too far away!

Mundaun is one of the most unique and beautiful horror games I’ve ever had the pleasure of playing. If you’re a fan of slow-paced and tension-filled horror games like Amnesia, you absolutely shouldn’t sleep on this one. A true labour of love, Mundaun is one which will stick with you for years to come.

Review copy of Mundaun provided by publisher for review.