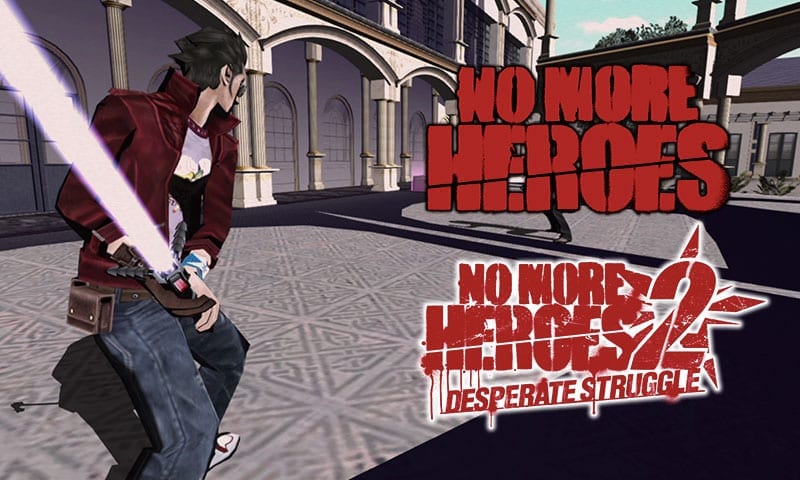 Once upon a time I was a young person whose only console was the Nintendo Wii. Enamoured with games like Devil May Cry yet with no means to play them, I set out on a quest to find a Wii game with the same hack-n-slash action and brightly coloured beams. What I discovered was No More Heroes 2: Desperate Struggle, the sequel to 2007’s No More Heroes. I’d heard of neither game before I dived right into NMH 2, and though I struggled to get a copy of the first game, NMH 2 became a firm favourite in my gaming collection. Since then, I’ve always thought favourably of our sexist, potty-mouthed assassin Travis Touchdown, and even more favourably of his cat, Jeane. When Nintendo surprise-announced that both games were (finally) coming to Nintendo Switch, it was all I could do not to burst into tears. Could No More Heroes stand up to my childhood memories? Could the Switch’s JoyCons come close to emulating the wild slashing of the WiiMote, and – more importantly – how badly does the toilet humour hold up in 2020? Here’s our review of No More Heroes 1 and 2 on Nintendo Switch.

NOTE: No More Heroes and No More Heroes 2: Desperate Struggle are two separate releases. Due to the similarities in gameplay, and as they were released together, this review covers both games.

Both No More Heroes and No More Heroes 2: Desperate Struggle focus on our protagonist, Travis Touchdown. Travis has often drawn comparisons to Jackass star, Johnny Knoxville, and that’s pretty much all you need to know about his character. The potty-mouthed “hero” is on a quest to become the number one assassin in Santa Destroy – not because he’s on a quest for redemption or a mission to save the world – he’s doing it to get laid. The same basic premise is also used for Desperate Struggle, though with more themes of revenge (don’t worry, no spoilers here).

What ensues in both games is a deliciously rude and often offensive journey through the ranks of Santa Destroy’s best assassins. It’s up to you to slash and hack your way through each high-ranking boss, waving your beam katana and occasionally transforming into a tiger.

When a break from all the action is needed, return to your motel or take part in some side jobs. Both No More Heroes 1 and 2 are packed with mini-games known as side jobs, and there’s plenty to keep you busy.

No More Heroes and No More Heroes 2: Desperate Struggle both look excellent on the Nintendo Switch, with an art style which lends itself well to an upgrade from the Wii. NMH 2 looks slightly better than its predecessor, with sharper graphics and clearer objectives. It also looks bloodier and wilder, offering a more immersive experience and making its predecessor look a little tame by comparison.

The comic book-like style of No More Heroes and its characters fits incredibly well within the genre and the gameplay, and the series has never before looked quite as good as it does on Nintendo Switch.

Both No More Heroes 1 and 2 give players the option of motion controls with JoyCons detached, or button-bashing with them attached. I was quite pleased to see this, as No More Heroes spin-off Travis Strikes Again, can’t be played on my Switch Lite as it needs JoyCons detached. Both modes are incredibly fun to play, but there’s nothing quite like slashing the air with your JoyCons, trying to land the right blows, executing dodges and following the QTEs to the rapid beat of the game’s music. This isn’t a rhythm game, but it goes far in using music and motion to immerse you in the gameplay and make you feel like you’re really wielding a weapon.

When you’ve had enough of the hack-n-slash, retreat into mini-games like coconut collecting or bug-killing. The mini-games across both titles contain Easter eggs for existing titles, with throwbacks to games like Super Mario or Space Invaders, complete with 8-bit graphics. The best mini-game comes from No More Heroes 2, where you’re tasked with helping your fat cat Jeane lose weight. This is achieved by massaging her or making her jump after string. Successful weight loss will unlock new combat moves for Travis. Stupid? Yes. Wonderful? Absolutely.

Some mini-games can also help you earn currency. In the first No More Heroes, currency is needed to unlock boss battles, though this isn’t the case for Desperate Struggle. Desperate Struggle instead gives you more freedom, letting you play as you like. The first game also hems you in by forcing you to manually travel around town on a clunky motorbike, instead of the fast travel we see in the second game. Slight gameplay tweaks like these make No More Heroes 2 a much more fun and less restrained experience, though both titles have their merits.

Both No More Heroes 1 and 2 offer something that’s right at home on the Switch – a hack-n-slash that successfully utilises the JoyCons. The result is an incredibly fun experience spread across both games, with gameplay which can definitely challenge you in places. These games aren’t button-bashers (or JoyCon wavers?), and you won’t get far unless you figure out the right strategy for each boss. Challenging and rewarding – plus you get to wave a BEAM KATANA around! What’s not to love?

Accessibility is an important topic to mention when we review a game, but No More Heroes 1 and 2 are sadly lacking when it comes to Accessibility features. Both games have subtitles, but there’s no option to change size or add a background for ease of visibility. The games come with two initial difficulties unlocked: Sweet and Mild. While Mild is touted as a “bit of challenge,” it’s more akin to “Hard” than “Normal,” and there’s no option to change your difficulty settings later down the line. If you spend five hours with Mild only to get to a boss who’s just a bit too tough, you’re stuck. I’d like to have seen a way to change difficulty, and the ability to speed up cutscenes also wouldn’t have gone amiss.

No More Heroes 1 & 2 are two games I’ve been waiting for on Switch, and while their Accessibility features could be improved, there’s little else to criticise the re-releases for. Both games are challenging and fun, though the NSFW language and the occasional sexist comment might turn some people away. If you’re looking to feel like a powerful sword-wielding assassin then these games are for you. If I had to pick one, I’d go for No More Heroes 2: Desperate Struggle over its predecessor, simply because it looks a little better, feels a little more dramatic, and you can help Jeane lose some pounds. You can’t go amiss with picking up both titles though – as long as you don’t mind some potty humour!

No More Heroes 1 & 2 are available for purchase separately via Nintendo.