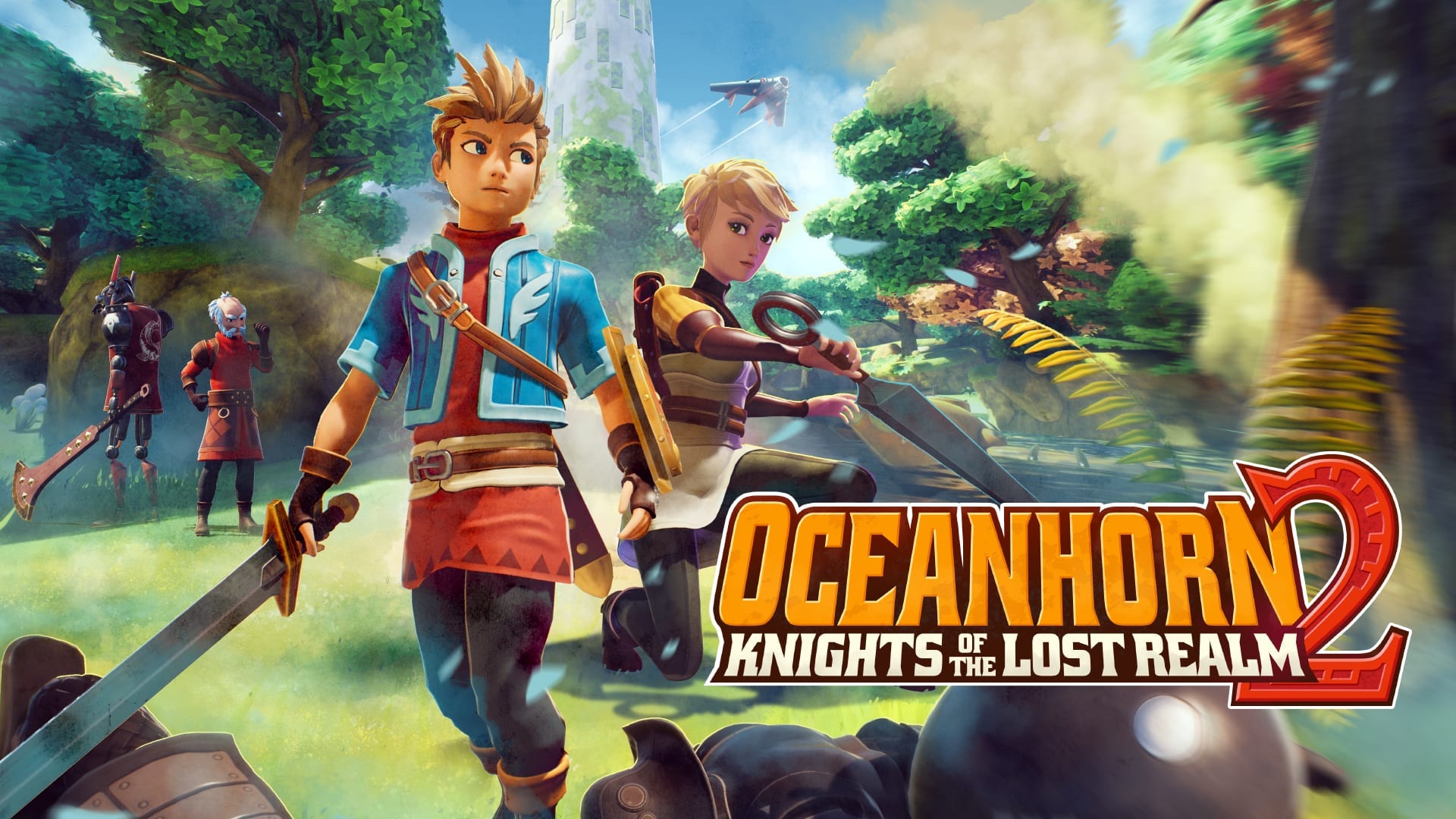 The Oceanhorn series first kicked off back in 2013 with the release of Oceanhorn: Monster of Uncharted Seas. Eventually available on everything from PC to console to mobile, the game immediately drew comparisons to the beloved Legend of Zelda series, leaning heavily into the same bright aesthetics, heart pieces, slingshots and dungeons. Oceanhorn quickly found a firm fanbase of its own, leading to the release of Oceanhorn 2: Knights of the Lost Realm via Apple Arcade in 2019. Cut to now, when the game has finally migrated over to the Nintendo Switch. How does the game hold up and does it improve on the original Oceanhorn? Here’s our review of Oceanhorn 2: Knights of the Lost Realm for Nintendo Switch.

The game kicks off with the typical story you’d expect from an adventure game similar to Zelda. You’re a hero (specifically a knight), and it’s up to you to save the world from impending doom. Along the way you meet a colourful cast of characters, face fantastical monsters and explore the universe as you search for collectibles. It’s a tried-and-tested narrative formula that lends itself to the world well, but don’t expect any tear-jerking moments.

Oceanhorn 2’s graphics and style have improves massively over the first game. The original took more inspiration from early Zelda games, favouring top-down gameplay. Oceanhorn 2, however, has implemented a style more comparable to Breath of the Wild, offering third-person gameplay that feels fluid and natural. Moving from top-down to a more traditional RPG style definitely suits the tone and visuals of the game, and it’s likely to appeal to more people because of this choice.

The game looks phenomenal on Switch, with huge sprawling areas to explore, whimsical character designs and stunning environments. Is it hyper-realistic? Of course not, but it has wonderful design – especially when it comes to the environments you’ll explore. Despite a heightened focus on realism compared to its predecessor, Oceanhorn 2 still remains cute and cartoony at its core. It’s one-upped the original in every way when it comes to the overall style of the game, which is impressive, considering how lovely the first game looked.

The gameplay in Oceanhorn 2 is, again, greatly improved. I’m not too much of a mobile gamer, but it definitely wobbled my head to know this game started out as a mobile title as it’s just so suited to the Switch. I expected this to be nothing more than a mobile port, with janky controls that had been adapted for the Nintendo platform. Instead I was treated to some wonderful combat, exciting puzzles, and lots of exploration opportunities.

Combat takes some skill when it comes to mastering your defence, while your arsenal of weapons (including a gun, bombs, lightening ammo, a grappling hook and more) gives you plenty of options to ensure you’re tackling the situation in the best way possible.

Puzzles are challenging enough to stump you (they can actually get very challenging at times), but varied enough to keep you progressing through the story. From the more-challenging statues of owls with riddles to solve, to your basic weighted switches, there’s a lot of variation for puzzle lovers. (Note that you might need a walkthrough if you’re not used to some bite in your puzzles).

Oceanhorn 2 also has a party system, in which friends you meet on your travels become party members who you can then command to help with combat or in solving puzzles. This was nicely implemented and easy to work using the weapon radial wheel. Teamwork makes the dreamwork, and with your robot companion and your love interest by your side, you’re ready to take on the Big Bad.

The game menu will give you access to your Gear, Quest log and Challenges, which offer you an extra chance to earn XP and level up with a mixture of highlighted combat challenges and some hidden ones. Adding an extra level of gameplay for all your completionists out there is a welcome touch.

Oceanhorn 2 is also packed with lovely touches like having party members recognise enemies by sight and calling out their name (or at least, their monster species). There’s also the occasional dialogue option for you while in conversation with NPCs, though these appear to be just surface-level.

RPG elements give you the ability to not only level up your character, but also upgrade your weapons. The ability to use spells as well as your traditional weapons is also a nice touch. All in all, the gameplay here is robust, solid and a lot of fun.

Oceanhorn 2 is a massively entertaining game, and I sunk in a lot of hours just wandering around and exploring the different levels and worlds available to you. While it didn’t feel quite as solid as a game like Breath of the Wild, I found myself enjoying the game almost as much thanks to its tight controls, beautiful landscapes and inviting level design.

As a fan of the original Oceanhorn, I shouldn’t be surprised at just how much I enjoyed Oceanhorn 2 – not just as a review game – but as a game I’d return to again and again. It’s definitely up there with one of the best RPG experiences on Switch.

We love it when a game we review has some solid Accessibility options, and Oceanhorn 2 definitely delivers.

Oceanhorn 2: Knights of the Lost Realm has quite a few language options and subtitles are automatically applied. There’s no option to change subtitle size specifically, but you can increase the size of the UI thanks to in-built UI Scaling – a very handy accessibility tool!

While it might not specifically relate to accessibility features, I do want to talk a little about the in-game menu, which is very easy to understand and flip through even if you’re new to RPG games. Upgrades are explained carefully and thoroughly, while your Adventure Log keeps tabs on all signs read and all words spoken. Forgotten what Ambassador Irontalon just told you? Don’t worry, it’ll be first on the list in your Adventure Log.

Though Oceanhorn 2 doesn’t particularly add anything new to the RPG genre, it excels in everything an RPG should and shouldn’t be. What we have here is maybe what I’d call Breath of the Wild Lite, a game perfect for newcomers to the RPG genre (but those still happy to be stumped by puzzles), or those just looking for a new portable adventure.

I would have liked to see a more engaging storyline and perhaps a few more tweaks to offer a more original experience, but even following the tried-and-tested adventure game tropes, Oceanhorn 2 still manages to come into its own.

If you’re fine with the occasional minor graphical bug, Oceanhorn 2: Knights of the Lost Realm is an essential RPG for the Nintendo Switch, and it might just tide you over until we get a new Zelda.

Oceanhorn 2: Knights of the Lost Realm was played on Nintendo Switch for this review.