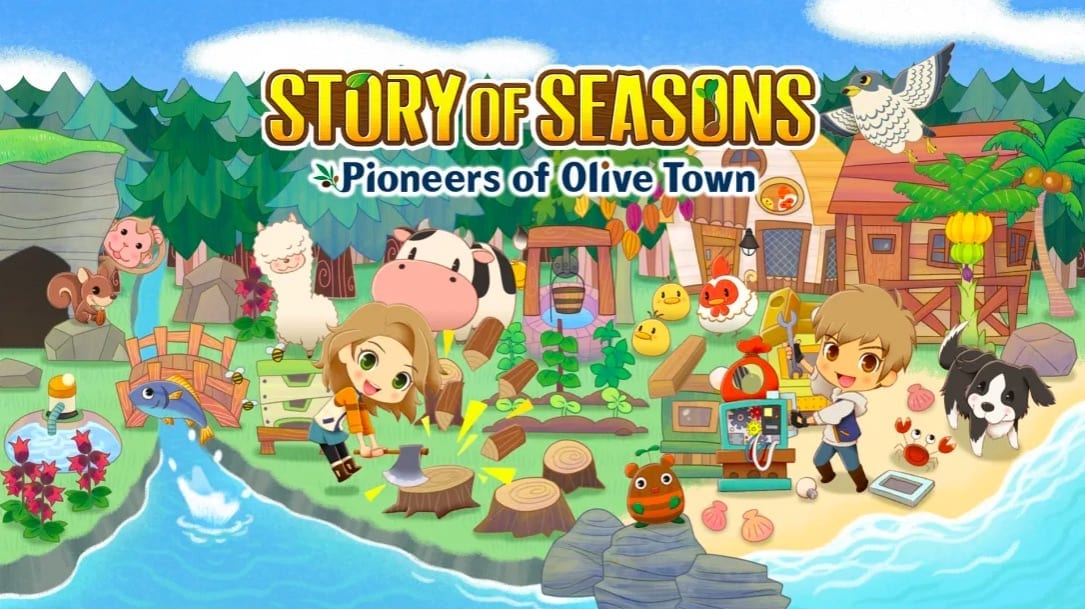 Story of Seasons: Pioneers of Olive Town is putting its roots down as the brand-new entry in the “definitely-not-Harvest Moon series”. This long-awaited frolic into farming is out on Nintendo Switch today, March 23, but will it be the cream of the farming-sim crop?

Well, it depends on what you’re after. Here’s our review of Story of Seasons: Pioneers of Olive Town.

Like many good farming/life sims before it (and many that will come after it, I’m sure) Story of Seasons: Pioneers of Olive Town offers players more freedom than ever before. In the first few minutes of your new adventure, the game soothes your worries and wraps you up in its fresh, spring-like familiarity. Waking up and tending to my saplings feels as sure and as comfortable as the sunrise, yet it never ceases to amaze me.

I could almost feel the mud seeping through my jeans as I tended to my land, purchasing seeds and sowing them outside my little tent. There’s a serenity that farming sims provide players, and Story of Seasons: Pioneers of Olive Town has the tone down perfectly.

This familiar feeling of serenity is always underpinned by a darker thought – “I’ve done this before… This untamed wilderness will soon be thriving with more chunky cows than I can count”.

In its efforts to offer the player more customisation than ever before, I found myself paralysed by choice. I felt the narrative was spread too thin. The new marriage candidates – and townsfolk, for that matter – all seemed a little bit similar.

If you know me, you know that I’m a huge fan of farming sims. I have far more hours than I’m willing to admit in Stardew Valley and Animal Crossing. So it’s quite tricky to avoid comparing them, especially seeing as Stardew was inspired by the original Harvest Moon games. But if there’s one thing I can count on a farming sim for, it’s a lot of heart, which I just didn’t feel here.

The charm seeps from every curve of these designs. The townsfolk are adorable, which is bound to be a treat for long-time fans. But as I mentioned, the character portraits in the previous Story of Season game that added so much character and detail to the  3D models are gone, leaving players with eerily still 3D models that struggle to get across any personality.

But I give points to the chunky cows. I love them.

The gameplay of Story of Seasons: Pioneers of Olive Town is what you might expect from a farming/life sim though, of course, Harvest Moon was what made these so popular in the first place. That’s not necessarily a bad thing. I always felt like there were things to do, whether that was harvesting my crops, talking to the townsfolk or watching my chunky cows roam the land.

I particularly enjoyed community events, especially the woolliest-animal contest and the Pet Derby. Whilst I found it a shame that the townsfolk didn’t speak about ANYTHING else in the lead up to the event, I can appreciate their excitement. With over 200 unique events happening throughout the year, I could feel the buzz of a small community.

Other than that, the gameplay of Story of Seasons: Pioneers of Olive Town is as familiar as ever. I’ll leave it up to you to decide if that’s what you’re after.

Performance-wise, I played through Story of Seasons: Pioneers of Olive Town on the Nintendo Switch. It ran smooth enough, with a few frame drops in particularly intensive parts of my farm in both handheld and docked mode, but nothing that impacted my enjoyment of the game. What struck me, however, was the sheer number of loading screens. Moving between parts of the farm and in-and-out of buildings took me out of the calming world of Olive Town in a way that a farming sim never should. The devs have stated that they’re working on shortening these load times, but I felt it worth mentioning.

It may come as a surprise to many players, but Story of Seasons: Pioneers of Olive Town has fairly good accessibility options. Seedling Mode and Normal Mode make a welcome return, offering a difficulty option for less experienced players, or just people with less time in the day. I played on Seedling Mode so that I could experience most of the game, which allowed me to sell items for more money and make friends easier.

I also noticed that there were no real gender-neutral options, even though none of the customisation options are gendered. When creating my character, it filled me with the hope that this would be a farming sim that didn’t subscribe to the gender binary. Whilst the game has made some steps towards inclusivity with ‘best friend ceremonies’, which allow for same same-sex relationships, there’s still a way to go. Soon after creating your character, the game forces you to pick a gender and gives the (incorrect) reminder that your gender can’t be changed later.

So, is Pioneers of Olive Town Worth Your Money?

There are few games that can switch my anxiety-filled brain off, but Story of Seasons: Pioneers of Olive Town manages it. The peace you’ll find by creating your own agricultural haven is a remedy to the busy, bustling world we live in. It’s certainly a laid-back experience, even for a farming sim.

Whilst the graphics are packed with charm, the story feels as empty as my farm on the day I arrived. Farming sims owe a lot to this series, but other games perfected it. But for newcomers to the genre, or for those who are looking for a simple life on a plot of land, Story of Seasons: Pioneers of Olive Town certainly isn’t one to miss.