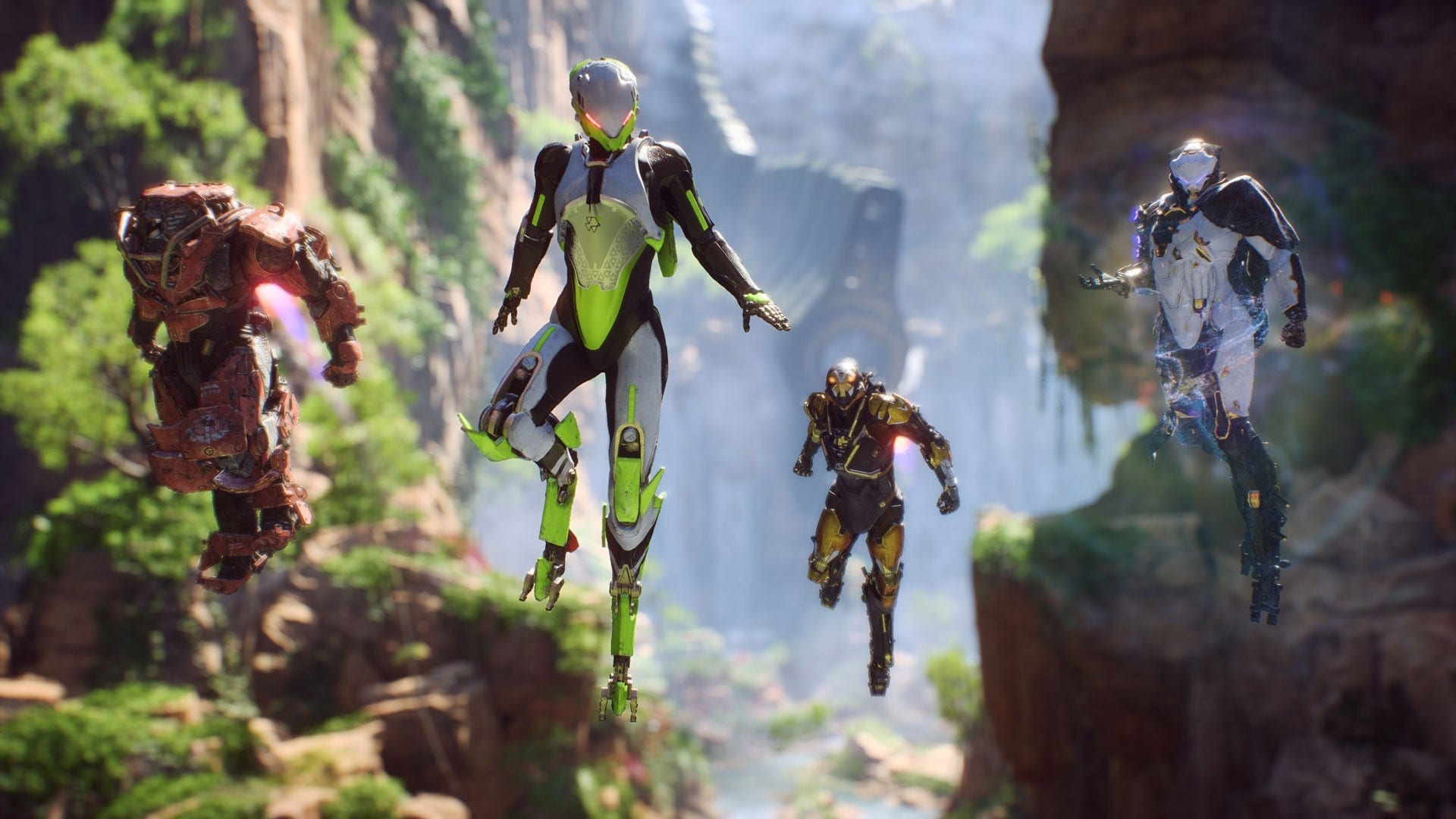 Anthem, BioWare and EA’s answer to loot shooters like Destiny and Warframe, leaves me with conflicting and mixed thoughts. On one hand, Anthem is a gorgeous game with some of the most fun exploration I’ve ever experienced, especially in the genre. On the other, it’s a tedious chore further soured by boring missions, a bland story, and really long loading screens. It has many high moments, but those are ultimately outnumbered by the negative ones.

By far, my favourite part of the game is exploring the world of Bastion. It’s breathtakingly beautiful, made even more so as you try to maximise your flight time. One of the highlights from my 20+ hours was seeing the Fortress of Dawn for the first time. I was amazed, and it didn’t get less incredible each time I revisited.

Combat, too, is one of Anthem‘s strengths — though it lacks the weight and punch of Destiny’s gunplay, I find it far more engaging than Warframe’s. If you ever played Mass Effect: Andromeda, Anthem‘s combat feels like an evolution of that. Unlike that game, however, the character models and animations are solid and downright nice to look at. Whether it’s the gruff Yarrow or the professional Tassyn, having the chance to talk with some of these characters is a treat. The voice acting is mostly stellar, too (especially Zoe’s, Tassyn’s, Haluk’s, and Faye’s).

Every chance to go out in my javelin was exciting; I started with and ultimately main Storm. Each unit is Anthem‘s class system, with my choice being the mage-like floating god of destruction and chaos. Not only does Storm have a cape, but it’s so exhilarating to play. Rain down lightning, exploding fireballs, and massive chunks of ice, and when you build up enough ultimate energy, throw all three down for massive combos and damage. The other three options are tons of fun, too. I especially love Interceptor.

Each javelin has its strengths and weaknesses that you’ll learn as you play, and Anthem encourages teamwork and synergy. During the week before launch, most of the people I played with used Storm, though I saw more variation as we all increased in level.

Anthem offers you the chance to matchmake into a team to take on a mission, or go it solo. If you opt for the former, you can work with up to three other people to kill enemies, solve puzzles, and explore Bastion. It’s fun, but interactions are strictly limited to voice communications and a very small number of gestures. There’s no local text chat on PC.

Sadly, this is where my praise ends. Flying, combat, exploration, and character models can only do so much to counterbalance the game’s weaknesses. I’ll talk about bugs, loading screens, and stability problems later, since those can be fixed and addressed in future patches, but there is more wrong with Anthem than just those, and fixing them will require work. 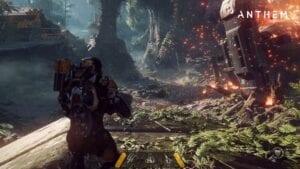 When approaching Anthem, I went in not only as a very long-time BioWare fan, but also as a player who has spent hundreds upon hundreds of hours in Destiny, Destiny 2, and Warframe. So I know that loot shooters are often repetitive and boring at times. The point is, after all, to get the best loot. Anthem takes this too far, however, since all the missions are copy-pasted objectives that all meld together, with only a few notable ones that are even the least bit memorable.

With Destiny and Warframe, you had the Tower or your ship to return to, a place to relax, check out your new stuff, and plan your next move. Anthem‘s hub, Fort Tarsis, is beautiful, but also a boring, listless place that is a frustration to go back to (and you have to after each mission). All of the side characters and quest-givers are spread out, which is only a problem because your pilot meanders through the winding streets and levels at a snail’s pace. I dreaded going back after missions; Fort Tarsis is devoid of life and any sort of real appeal.

A lot of the NPCs repeat their walking paths every time you return, some say the same lines over and over, and others have unnaturally weird ambient conversations as you pass by. More importantly, I never cared about most of the characters who call Fort Tarsis home, and the ones I did weren’t the main ones. It seemed like they were forced, like BioWare was telling me that I’m supposed care about them because my pilot does, but they didn’t have any depth or substance to make me give a damn. 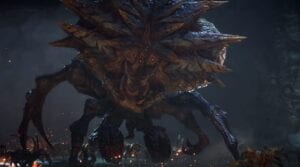 Interactions with everyone were mostly a chore, like the rest of Anthem. Now, there were some genuinely good moments, like: Tassyn opening up to you a bit and trying to express that she trusts you, Saryna’s obsession with cute baby animals, an old woman whose loss and pain has caused her mind to create delusions to protect itself, and helping a wife who says her troubled, reclusive husband needs a friend. These moments reminded me that this was a BioWare game and as such, I genuinely looked forward to talking with these characters again, because Anthem successfully conveyed that both my character and me had vested interests in helping these people, even if it was just offering advice.

Some of my other irritations with the game came down to quality-of-life issues. Even something as simple and basic as equipping new gear is a pain since it requires you to go to an entirely new screen, complete with its own load times back and forth. And yes, the loading screens are awful. I played Anthem on PC, originally installed to WD Caviar Black hard drive that I use for all of my games. The load times were so bad, even to get to the inventory screen, that I moved stuff around to make room on my OS boot SSD. This helped some, but not enough. One of the worst instances I came across is when you’re out on a mission and one or some of your teammates get too far ahead. The game gives you a countdown and if you don’t catch up in time, guess what, you get a loading screen that takes way more time than it would actually require for you to catch up.

Bugs and glitches were more common than I would have liked, too. When talking to Nadira at two points in her arc, for instance, selecting the [1] conversation option would always, without fail, cause the game to crash. I had to go with the second choice, the one I didn’t want to use, to get the quest arc to progress. Another time, I was trying to complete the main quest when either I’d get kicked to the title screen upon initiating the conversation or the character would just fall through the Fort Tarsis map, both of which were repeatable and prevented me from progressing until some arbitrary point when everything decided to work again.

Objectives out in the world can sometimes take several minutes to update, leaving you and your squad messing around until the game catches up… if it ever does, in which case you have to start over. And during several key moments in the main story cutscenes, thanks to the myriad of connection issues, I was kicked to the title screen and I missed crucial plot points, meaning I had to piece together what had happened. The story wasn’t strong, in my opinion, but missing out on important parts was not enjoyable.

I wanted to like Anthem because I like BioWare, I like loot shooters, and I like the concept. If I hadn’t had to press on for the purposes of this review, I would have stopped playing and not looked back until the problems, both systemic and functional, were addressed. It might seem unfair to rail on Anthem like this – after all, the first year of Destiny and Destiny 2 were a train-wreck of boredom among other issues – but I do so in the hopes that BioWare will fix this game, like Bungie fixed Destiny. Anthem has a good and enjoyable foundation and I just want to see it reach its fullest potential.

Editor’s note: Loading screens and some issues mentioned in this review may be addressed in the day one patch or future updates.