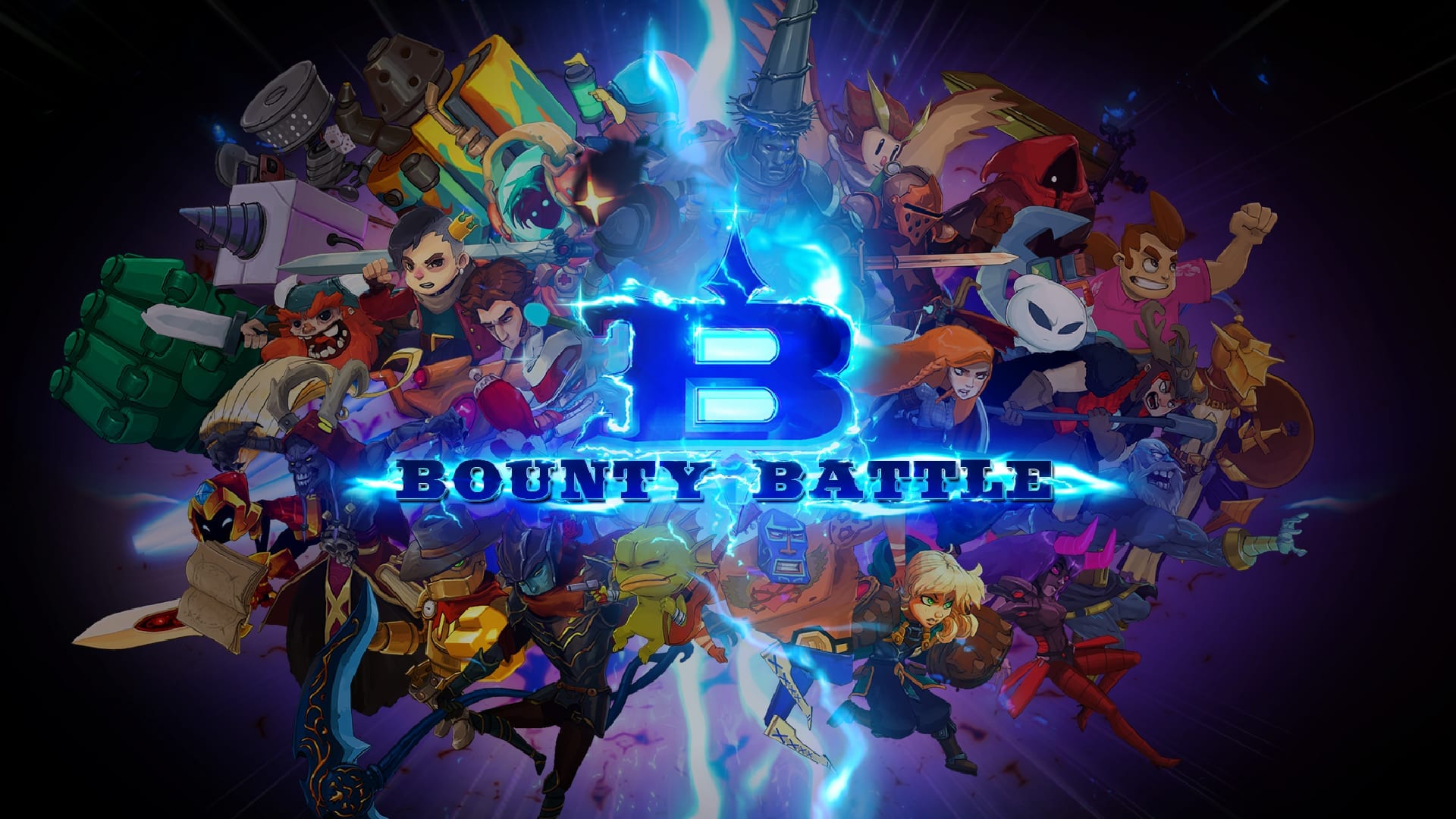 Bounty Battle markets itself as the ‘ultimate indie fighting game’. You can easily see the potential – pitting heroes from games like Owlboy and Darkest Dungeon, to Dead Cells and Guacamelee in a 2D fighter frenzy sounds promising. Unfortunately, this game fails to deliver on almost every level. As someone who loves fighting games, Bounty Battle’s failures hit harder than its clumsy controls ever manage to.

Bounty Battle starts on a high. An impressively animated opening sequence introduces all the characters as they’re sucked into swirling vortexes across the multiverse. More on the narrative in a bit, but it’s certainly an ambitious concept.

Unfortunately, my praises for Bounty Battle end about 0.2 seconds after this cutscene. Bounty Battle, for some unknown reason, leans heavily on a very sudden (and aggressively guache) glitch effect. There were moments I had to ask my Player 2 if the game had broken or if it was MEANT to have such clumsy screen-tearing. Combine ridiculous loading times, juddering frame rates (especially if you try and play with four players) and glitchy visual effects, it’s not a good look.

There’s no point beating around the bush. You’ve noticed it by now. If you told me “Bounty Battle is basically indie Smash Bros.” I’d hand over my money quicker than a jumping Jigglypuff wearing a Bunny Hood. Anyone who knows me knows of my love for fighting games. If you don’t know me, I’m sure you’ll be able to pick it up from the detailed analysis of Smash Bros. I’m about to go into.

One of my favourite things about Smash Bros. is the way that the art team marries the art style of a number of completely different franchises into one beautiful line-up. To have Mr Game And Watch and Kirby in the same game is one thing. But to have those two drastically different art styles looking like they belong together, whilst maintaining the personality of the original game is an unparalleled feat that isn’t given enough credit. Bounty Battle has certainly tried to emulate this, by making each character fit the same cheap Flash-game house style. To ruin the gorgeous pixel art of Dead Cells is a crime in and of itself, but to remove any sense of individuality from the characters is unforgivable.

I will say though, for all of Bounty Battle’s flaws, the music certainly isn’t one. Shout out to the artist AdhensiveWombat for getting me hyped to clumsily mash buttons.

The gameplay is where Bounty Battle truly falls apart. Take a deep breath before reading this, it’s UNNECESSARILY obtuse.

First of all, instead of using stick tilts that fighting games are known for, players will have to navigate generic ‘light’ and ‘heavy’ attacks. These attacks are accompanied by ‘special’ moves that are powered by ‘Bounty points’. If players run out of Bounty points, they’ll be stuck with these basic attacks. If you beat a person with a high bounty you get their bonus. Following? Good, because I’ve played it and I’m still not. I don’t think I can face another gruelling 20 hours trying to work it out.

A barrage of information is displayed on a tiny, hard-to-read HUD in the bottom left corner. I’m told that somewhere here are my Bounty points, although I’m not convinced.

You can’t block attacks, but you can use B to move out of the way. Down+B makes you invincible for a short while. Up+B is teleport, whilst side+B is roll. All dodge movements consume energy, and all light attacks are energy-free, but if you spam attacks you can lose Bounty points.

I nod, tears streaming down my face as my head spins with all this information.

It’s all in vain though, because it’s ridiculously hard to actually make out the attacks on screen and connect with your opponent. A myriad of particle effects and flashy glitches for status impacts, combined with unresponsive controls makes button mashing light attacks a viable strategy. I can see what the developers were going for; there are genuine attempts to add depth. A rolling dodge and a vertical teleport are interesting ideas. Unfortunately, the controls are just too complicated and imprecise for it to make much of a difference. The whole affair just feels like a half-finished Flash game that I’d accidentally click on an ad for in the late 90’s. To expect people to pay £20 for this is an insult.

After reading that, you might be wondering where the fun is. Me too. Surely that £20 price tag has got to be justified somewhere?

2020 has, for some reason, seen a lot of people turning to online activities to hang out with their friends. Unfortunately, if you were desperate to try out Bounty Battle with friends, you might have to wait a while. Unlike a variety of infinitely more-enjoyable fighting games on the market, Bounty Battle has no online features.

If you live with someone you REALLY dislike, you might be tempted to subject them to local multiplayer. After much convincing, I managed to get my Player 2 to agree to a round and, honestly, I just felt bad for him. Just because I had to suffer doesn’t mean anyone else should.

An important part of single-player fighting games is the AI. It’s a tough ask to get an AI to toe that delicate line between challenging and responsive. Bounty Battle does neither. Spamming light attacks is enough to wipe the floor of the hardest AI. I wouldn’t mind if there was substantial multiplayer or online functionality, but if you don’t have friends around, playing with bots is your only option.

Much like most of Bounty Battle, the developers have an interesting concept, but the execution is clunky and convoluted.

A supernatural event chose the greatest warriors from each world and bestowed upon them magical powers. Each champion has a bounty on their head. In the single-player mode, you must defeat each champion and fight for ultimate control over the multiverse. Pair this with 30 playable characters from indie darlings like Darkest Dungeon (a personal favourite) to Guacamelee, Dead Cells, SteamWorld Dig, Nuclear Throne, Owlboy, Axiom Verge, and Awesomenauts, it sounds like a great time.

Don’t be fooled. The narrative barely impacts the single-player gameplay, which is a shame for the only part of Bounty Battle that has promise.

If the clumsy gameplay, disappointing narrative, harrowing destruction of your favourite indie characters, lack of online functionality and poor performance wasn’t enough for you, what’s wrong with you?

BUT, if you want another reason to leave Bounty Battle in your shopping cart, there are very few accessibility options available. Whilst there are a few language options which I will give it credit for, it would have been nice to see a text size adjustment bar. The times text was on the screen it was way too small to read on a docked Switch and often disappeared off the screen before I could finish reading.

SO, IS BOUNTY BATTLE WORTH YOUR MONEY?

No! What are you doing! Stop!

Bounty Battle is offensively poor. An impressive selection of beloved indie characters are paraded around with none of the charms that their independent games have. I never thought I’d miss the cold, calculated way AAA equivalents are designed to make me part with my money, but I’d take a thousand carefully planned cash grabs over this staggeringly inept Smash Bros. clone. I don’t say that the game is almost unplayable flippantly. The sheer disappointment I felt playing this game was almost worse than the horrendous controls and the lack of gameplay options.

I gave it two cherries simply for the fact that I found the whole affair to be strangely fascinating, if not enjoyable. Plus the music slaps. This might be the worst game I play all year, and God help me if it’s not.

This copy of Bounty Battle was reviewed on Nintendo Switch.