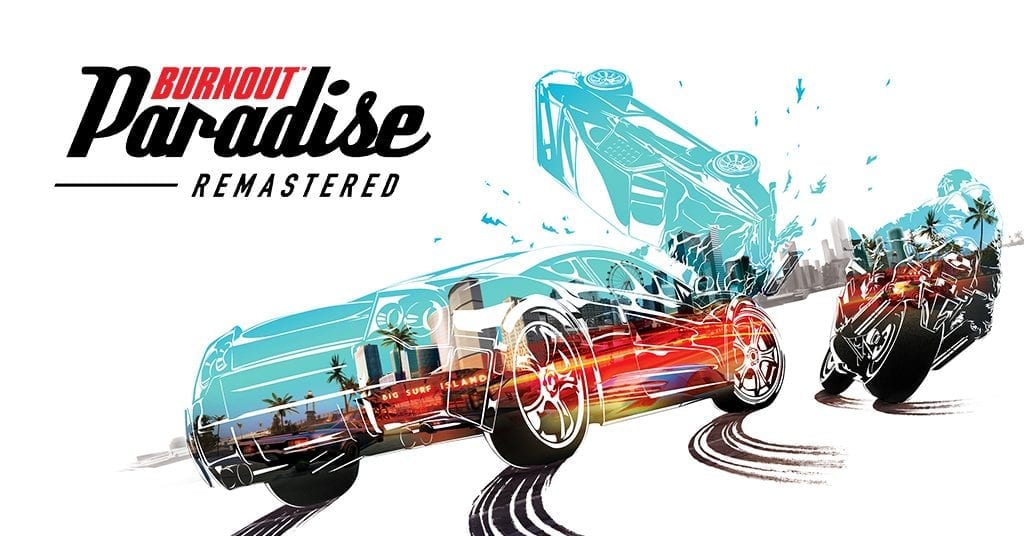 Ports to the Nintendo Switch have had a very mixed reception as of late. Some have stood out, shining in the Nintendo Switch’s capabilities, but some have floundered – getting lost in a quagmire of low resolution and shoddy frame rates. Fortunately, Burnout Paradise thrives.

Admittedly, I never had played Burnout Paradise on any of the previous consoles it was available on – so it was a very fresh approach to the driving game criteria I am used to playing. I remember playing Burnout 1 through to Burnout 3 where the setup was very linear and stuck to the traditional trend of the driving game. Paradise breaks the mold here and plays rather like the old Need For Speed games, relying on free-roam to find your objectives rather than simply just choosing which race to go on next. (If the early Burnouts did have free roam, apologies, my memory has failed me)

The soundtrack on Paradise is perfect. Kicking off your journey you are faced with a race and then a wreck fest, all the while accompanied by Guns ‘N Roses track ‘Paradise City,’ which is very apt. There’s a great mix between heavy and more calm songs for your listening needs. Not everyone is on the same level of heavy metal-loving as I am, but smashing up cars whilst listening to Seether and Killswitch Engage was an evening well spent for me. You can choose to only play certain tracks at certain events as well which is a really nice feature and one I have not actually seen in any other game as far as I can recall.

Graphics-wise, it looks stunning on the Nintendo Switch. Obviously, with the Switch, you are not expecting the ridiculously high 4K graphics you see on the PC and high-end consoles, but I doubt anyone has bought the Switch for graphics. The frame rate on Burnout Paradise is one of the smoothest I have seen for a Nintendo Switch game and it copes brilliantly with the high pace the game throws at you. Your cars shine in the sunlight of the Paradise City and crumple into tiny pieces when you mistakenly drive into a wall. The blur effects from the intense speed work really well and don’t obscure your vision more than the intended amount at all.

Gameplay-wise, the experience is fun. It’s a game that doesn’t take itself too seriously, but also does not fall into the realm of silliness like so many others tend to do. It’s a path which racing game lovers will be all too familiar with, win events, get more license points, unlock more cars and areas – but it does not feel tedious. Certain events are only available to a certain car or motorbike types, so it isn’t just a case of choosing one car and going all out with it. An addition that would be welcome would be more customizable options for the cars themselves, make them more personalised to the user other than just being able to change the paint job to the pre-chosen colour schemes.

Overall, Burnout Paradise is a great experience and a very fine addition to the racing game scene on the Nintendo Switch. It’s a solid choice for those looking for a change from the Mario Kart like sphere and it’s a game I highly recommend you try.