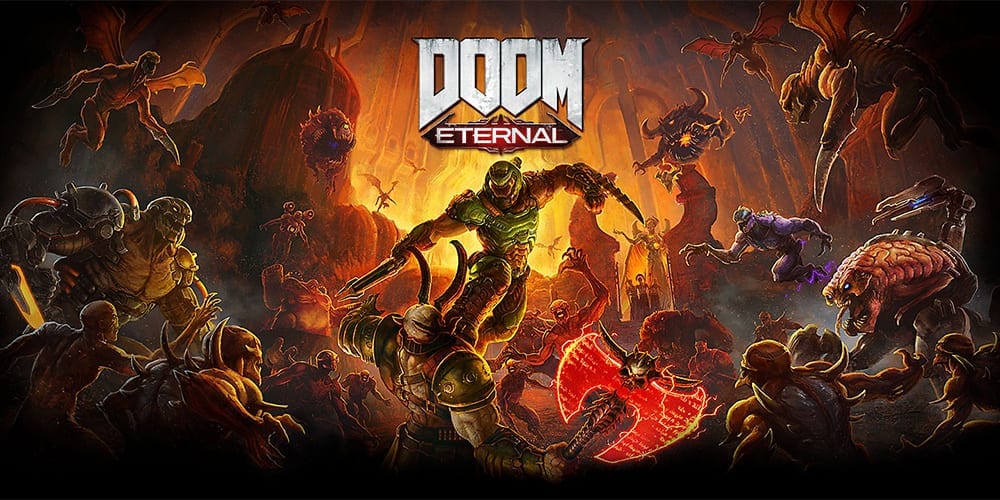 March 20, 2020 will go down in the history books as the day when two of the gaming world’s largest and long-standing franchises decided to release their new instalments.

Nintendo entered the battlefield with their long anticipated new Animal Crossing title, whereas id Software smashed through the gates with DOOM Eternal – the sequel to the beloved DOOM (2016). Naturally, the memes came flooding through from all corners of the internet and, needless to say, the world was united in the bizarre yet brilliant gaming hybrid.

On to the game itself: Immediately we are greeted with the fact that there seems to be much more of a narrative to the game rather than the simplistic smash and grab approach of the previous title. I feel this is going to be the deciding factor for most people when it comes to either loving or disliking this game.  The storyline somewhat humanises the Doomguy in a way and showcases him in ways that have not really been seen since DOOM 3. In saying this, the campaign itself is masterfully made and the storyline offers you a hand to improve your gameplay style as you progress as well. This is not done in a patronising way and presents the tips to you in a way that does not feel like they are telling you what to do, more suggesting moves which you could potentially use.

The game is aesthetically beautiful, there’s no denying that. The pace at which you character can fly around the map is perfectly rendered and the motion blurs created by the speed of your movements really enhance that ‘realistic feel’. The gore is phenomenal. The detail on the hell spawned creatures is captured perfectly, staying true to all the elements of the monsters that were present in the original PC version of the game.

There is a slight tweak to the gameplay style which does effect the way you play and has changed things around slightly from the 2016 release. Much more emphasis is on elements such as ammunition preservation and health management. Even on the easiest difficulty your management skills will be tested. The chainsaw has become one of your closest allies – it can be used far more often than in the previous DOOM title and is vital now to aid you though the large scale demon battles. You learn through destruction. Most large scale enemies have their specific weak points or downfalls which you learn to utilise effectively to bring each enemy down faster, giving you more time to rip and tear your way through the other hoarding demons. Quite simply put, you learn to become brutal as you blast through more hell spawns.

One of the main aspects that makes this game so enjoyable is the soundtrack. What’s the perfect partner to smashing hordes of demons? Heavy-hitting metal music. The music is at a pace which makes you flow through the levels at an elevated pace, mainly just to keep in time with the tempo of the gothic rock.

In terms of accessibility, the game offers a vast amount of support when it comes to learning all the tricks and tips to improving your gameplay. By no means do they ‘hold your hand and guide you through the game’, you are fighting demons after all. It’s a steep learning curve to become a professional demon slayer and I am not exactly a master of this craft – but the tips provided by the game opened up new game style avenues I would have struggled to naturally discover.

Overall, the game is a perfect addition to id Software’s vastly successful DOOM franchise. The storyline is solid and doesn’t rely on comedic quips or cheesy tropes to bring the plot together. The gameplay is smooth and runs you though at a flawless quick pace. The soundtrack is the big winner for me here – do yourself a favour and play this game with some bass heavy headphones. DOOM Eternal guides you through the gore filled decimation of the demons from hell and allows you to act with severe brutality. It’s a game I would vastly recommend.