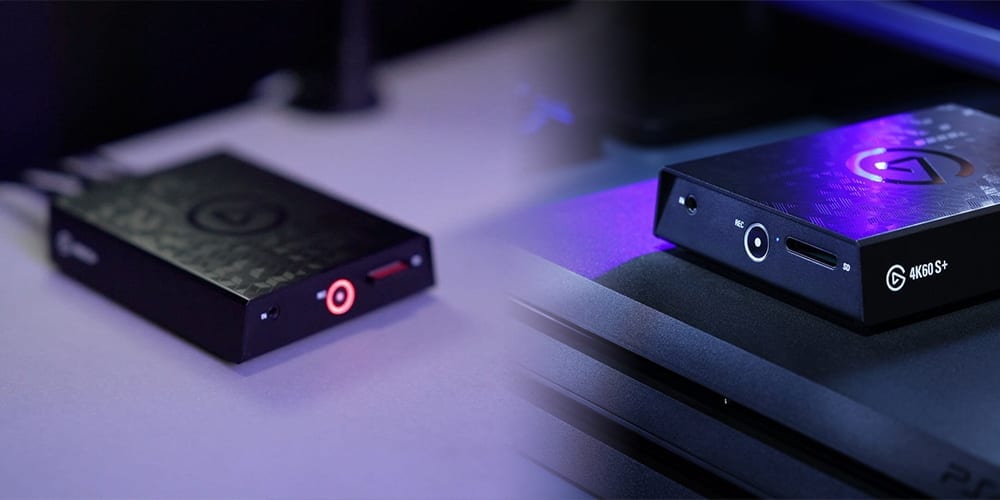 Streaming has vastly become one of the most popular recreational activities, and it is more important than ever to have the right equipment for the job. Elgato rule the roost when it comes to streaming hardware and they are very often the first company people think of when it comes to choosing a capture card.

“Compact and portable, 4K60 S+ sports all the cutting-edge technology you need to record high-fidelity gameplay.”

Compact and portable is rather accurate when it comes to the 4k60 S+. Indeed, it is not a big and bulky capture card, but it does require a lot of wiring and configuration compared to other capture cards. Around four cables are needed to be going from one port to another in order for the card to stream. Capturing footage can be as simple as using a SD card, but in order to capture in 4K, you need to use two HDMI cables, one cable to power the Elgato and another to connect it to your PC or laptop via the usb port. Whilst the actual capturing equipment is not vast in size, the cables can be cluttered should you be in a confined environment.

Personally, I don’t have a full PC gaming set-up, so I was mainly testing the capabilities of the equipment using the Playstation 4 and the Nintendo Switch. Playstation wise, a few alterations have to be made to support the Elgato streaming cards. It’s nothing too complicated really. The Nintendo Switch streamed all fine without any need to alter anything. An issue with the Playstation has been the capturing of party audio during a stream. This is an issue that is present across most streaming cards and is solved by having a headphone splitter – which is sold separately.

How does it actually perform then? Capturing on an SD card was nice and simple. I had a small SD card spare so just slotted it into the front slot of the capturing device and connected the Playstation to the Elgato via the cluttered cable process. The little red light at the front shone and all I had to do was click on it to start recording. The light would slowly glow to indicate filming was taking place and to stop it all I had to do was click on it. Helpfully, the Elgato split the clips from the recoding into short and manageable recordings, rather than having one long continuous recording which you have to then sift through to reach your end goal. It also records in 4K which is amazing for any content creator.

Okay, the elephant in the room which ended up being quite a big factor in reviewing this equipment, the Elgato 4K60 S+ does not work on Apple products. I primarily use an Apple Mac for streaming, recording, editing and posting – so the fact the 4K60 S+ would not connect properly to the hardware was really problematic. Luckily, I also have a windows laptop handy which ended up being a lifesaver, but the fact the 4K60 S+ does not connect to the Mac is odd seeing as Elgato products in the past always have. I can only assume the 4K capabilities are not currently supported by Apple’s hardware capabilities.

Steaming wise, the 4K60 S+ works fine in both OBS and Streamlabs. The connection process is easy enough and the streaming does run with a nice resolution. The 1080p is clear and focused with textures loading through nicely. I was running the stream on a computer with high specs and a very fast internet speed but the bit rates were still running on nearly the lowest settings every so often. It’s not the biggest issue but can be annoying every so often.

If your main priority for the card is to capture footage directly from your console to your computer, then this is a very good product to own.  The 4K capabilities of the recording device live up to the hype and footage is very clear when it is saved. The streaming capabilities of the device are a little underwhelming. Yes, it will stream your content, but it won’t be the best quality stream compared to Elgato products from the past – which when you consider the price of this latest product, is not the biggest positive. I would recommend this for content creators, but maybe advise using the HD60 S+ if your main aim it to just focus on streaming. I would still recommend this to content creators though. I have used this an awful lot recently to capture game footage to use in video creation and the content it does capture is always to a very high standard.