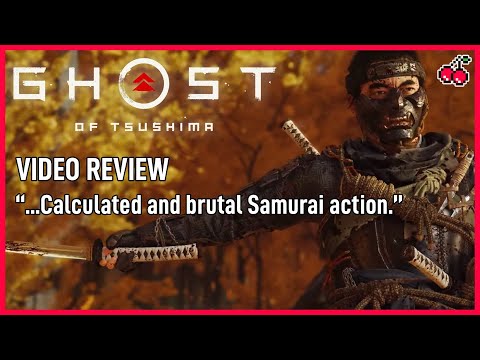 Travelling back to feudal Japan to fight off a mass tribe of anti-samurai warriors is not something I would immediately get hyped about, should it ever be pitched to me. But Ghost of Tsushima was different. Right from the moment that trailer dropped at E3 2018, I knew we were in for something special here – and thankfully it does not disappoint.

Right from the start, you are thrown into the action, watching a high ranked officer be burned alive by one of the Mongolian generals. You don’t even get a minute to wrap your head around this madness before you are charging down a hill on a horse chopping down the attacking Mongolian army. It’s fast-paced, to say the least, and throws you in headfirst. But it is not an overwhelming feeling facing these enemies so early on. Although it’s a challenge, you never feel fully overwhelmed or mobbed, which can occur in quite a few other games very easily.

The tutorial is not one that is either daunting or laborious. You learn as you go along with small hints that appear at the side of the screen, rather than stopping play and making you press the right buttons. It’s a relief really because it does not take away from the chaos going on around you. The controls are straightforward to learn, but a challenge to master in combat. This is a positive though, as it does not make the game as easy as others. You learn to adapt as you go along, mastering all different forms of combat to best overpower and outsmart the enemies you face. Stealth route fails? Go full combat. Combat route challenging? Retreat back and pick the enemies off from a distance.

The graphics are unbelievable. Never have I seen environments look so beautiful before. The lighting, the foliage movement, the character profiles, the way your horse’s mane moves depending on what speed you are going – it’s all perfect. Even elements like the blood spatter of a defeated enemy work so well. It’s just the right amount, never falling into the anime level of gore. There’s no better feeling than charging through a field on your horse, watching the natural elements move and sway beside you, or making your way across a coastline with the ships bobbing in the background, lined up perfectly with the setting sun. It’s like a living work of art.

Now for the only issue I had with the game: the replay value. Once I completed the game, I really did not feel the urge to go back and play through the missions I had missed or try some different tactics in the missions I enjoyed playing. It was almost a sense of “well that’s that all finished” even though I knew I still had quite a number of side quests and shrines left to find. The side missions are fun to do along the way, they take you away from the heavy storyline well and give the much-needed break you expect from a side quest. But they are not worth revisiting once the game’s main storyline is finished. It’s not a major issue I suppose, but it’s there. We are mainly here for the main storyline, which is amazingly written, but it’s nice to have those little bits extra to bring you back and carry on playing once the main story is completed. God of War is a prime example of this.

Ghost of Tsushima is a very well-made game that does exactly what it says on the box. You get the hands-on experience of samurai life in a beautiful environment with some very rewarding gameplay and fighting styles. It’s calculated and brutal samurai action. A fine addition to any gaming library and a game I would highly recommend you try out.

Ghost of Tsushima was reviewed on PlayStation 4

Ghost of Tsushima is beautiful. Its world is full of moments that’ll make you stop and just enjoy the scenery. Bright and bold it catches the eye and encourages you to explore it, to experience it and to be a part of it. Whether that’s finding a shrine, following a bird or petting a fox the world has so much happening that is a joy to behold.

That is Ghost of Tsushima at its best: when it is your playground to explore and enjoy at your own pleasure. Once you start to dive into what else the game has to offer some cracks do start to appear. Missions, whether main story or side quests, are littered with follow quest sections, glorified escort sections and even a few fail-the-game-if-you’re-spotted sections. They also tend to flag when you leave the mission area which is frustrating if you see something interesting a little bit out of the way. The freedom of the world is stripped away to become an experience like countless other games.

Is this a bad thing? Yes and no. There’s plenty of fun moments in these quests still and there’s a reason these mission types are such commonplace in gaming, but it’s when Ghost of Tsushima is doing something a bit different it excels.  One thing I love about the game is the descent into becoming the Ghost. You play as a samurai who is all about honour, so being sneaky is not something you’re used to. As you progress you have clear moments highlighting that this is not how you were trained.

It’s a nice way to add to the story and makes you genuinely consider which route to go when you need to take out enemies. If you do decide that stealth isn’t for you then the way of the samurai does not disappoint. Stand off against enemies and hit them with huge hits wiping them out instantly, wait patiently for them to strike and parry them away before unleashing lethal slashes with your sword. It’s extremely satisfying combat, even if it does take a little getting used to. Waiting for the enemy to move first and successfully taking them out though never gets old. Especially in boss fights. The characters that fill the world are fascinating too. I found myself enjoying side quests a lot. They work as a great alternative to advancing through the main story.

It’s helped by how lengthy the side quests can be. Called “Tales,” some of them branch multiple story options, whereas others can be completed as a one-off. It helps you connect more with the supporting cast and creates a fuller feeling world. Accessibility-wise you can make subtitles a little easier to read by adding a backdrop but you can’t change the size of them. You can also simplify control and change the level of indicators you have but there is not a huge variety there.

Kurosawa mode is also a touch disappointing, as the game doesn’t seem to take into account the differences in lighting needed for black and white to make it really pop. Although you might consider using it for an old school samurai film-feel, doing so removes one of the games best things: its use of colour.

The way that the game uses colour is genuinely beautiful and helps create some of the most visually appealing landscapes I’ve seen in a AAA game for quite some time. Ghost of Tsushima offers an open world that is fun to experience but is let down by its missions. If you can look past that though you will love it. Whether you’re sidetracked by the abundance of side quests, pushing on with the main story, tracking down collectibles or just exploring the vibrant world, there’s no denying that Ghost of Tsushima has plenty to do.