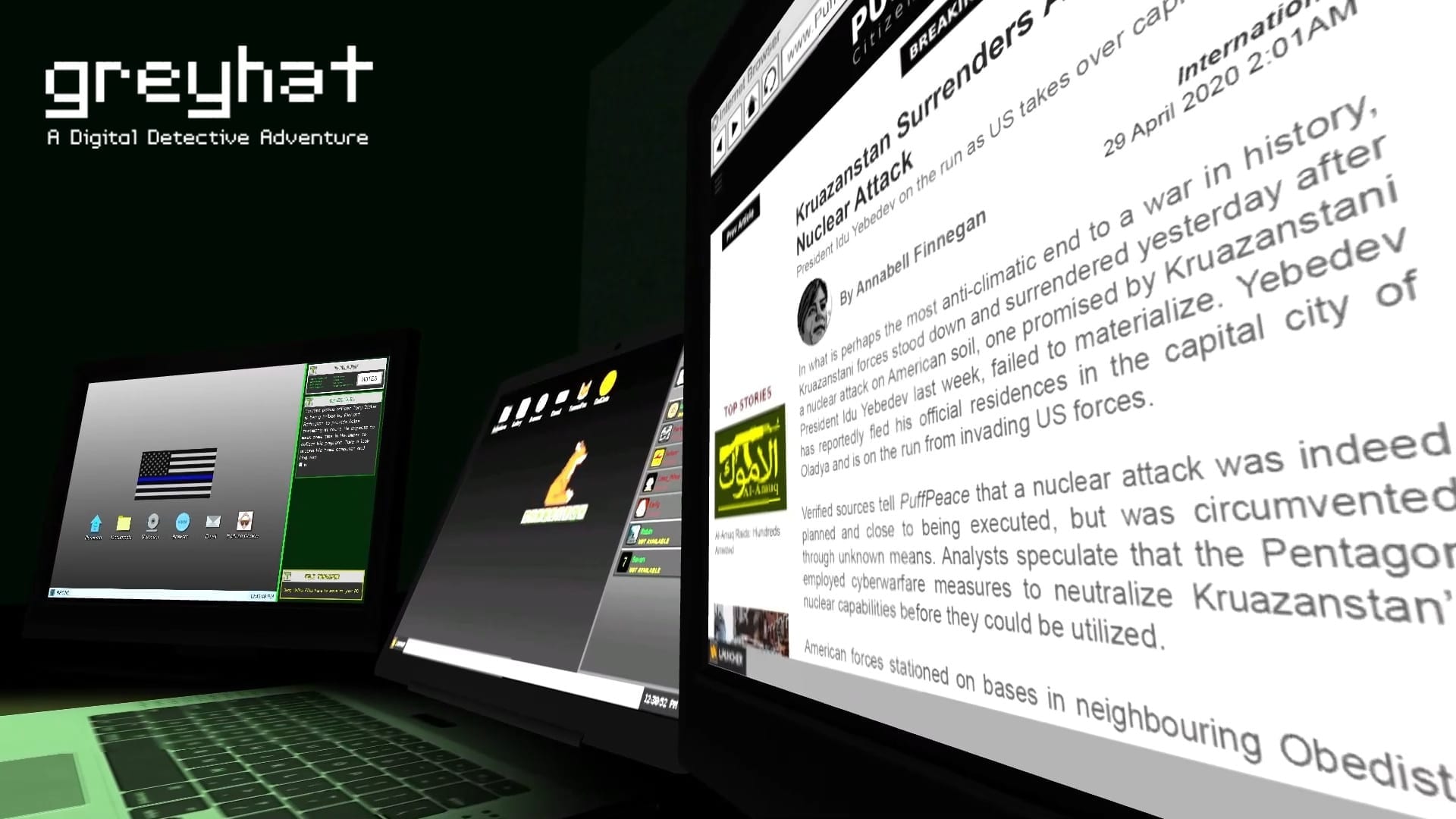 “I don’t know who you are. I don’t know what you want. If you are looking for a ransom, I can tell you I don’t have money. But what I do have are a very particular set of skills. Skills I have acquired over a very long career. Skills that make me a nightmare for people like you. If you let my daughter go now, that’ll be the end of it. I will not look for you, I will not pursue you. But if you don’t, I will look for you, I will find you, and I will hack you.”

GREYHAT is the first PC release from Limited Games, currently operating with a staff of one – owner, operator and solo dev Leon Lim. I hope it’s the first of many, as the care that’s gone into this one is really worthy of praise. That’s the headline – it’s fun, engaging and a great way to spend a couple of evenings as I have with it.

You take the role of a world-class hacker, ready to hang up his mouse and keyboard after one last job. As you’d expect from that trope, which never ends well, things don’t go exactly to plan. Turns out the victim of that last job is one bad dude, and it’s quickly his mission to make you pay for messing with him. Before you can pre-empt his next move, it suddenly becomes clear. He has your daughter. He gloats as you threaten, beg and reason with him to stop. But he won’t, and there’s nothing you can do. In the blink of an eye, ten years have passed.

The story establishes itself and the mechanics are taught to you neatly, in an immersive way, within the first half an hour of the game. As to how the story plays out from here – well, it’s best for you to discover. But safe to say the narrative is well thought-out and will keep you guessing as you move through the game’s five to ten hour runtime.

Gameplay-wise, everything takes place in a wonderfully gamified PC interface that is your portal to the computers of your targets worldwide. The attention to detail, flavour text and easter eggs throughout the game’s design help it feel a lot less linear than it actually is – as if you really are the master hacker at his PC. If you want to goof off playing PC games and leave your friends on read, you can really do that!

I think this is my favourite thing about GREYHAT – there’s so much meat on the bones of this experience, despite its relatively short length. A lesser developer could have released a game in which you play the individual hacking ‘levels’ one after the other with no filler. But Limited Games wants you to feel part of the world. From in-game games and websites, collectible stories and poems, and optional mini stories to discover as you rifle through hard drives there’s plenty for the completionist to find, and all with a degree of polish that many bigger studios wouldn’t prioritise.

Playing the game on its default setting was a decent challenge, with a smooth difficulty curve throughout. As you hack into a new target, you’re taken through a tunnelling minigame that sees you tapping away at your keyboard like an action-movie hacker in the 90s. It requires concentration and patience, but still helps you feel like you’re really doing the job. It’s also the only part of the game whose difficulty can be directly set. Some might find it frustrating, so there’s helpfully an option that completes it automatically for those who don’t love it.

Although difficulty can’t otherwise be set for puzzles, there are optional hints you can access if you get stuck. Available in two flavours, cryptic or simple (again, non-essential but really thoughtful feature!), you can set your own difficulty dynamically as you go. Because I am absolutely a l33t hax0r in my daily life, I wasn’t reliant on the hints system (okay, except for maybe a couple of times). The puzzles can be beat with your skills alone – but it’s great to have the option as it increases the accessibility of the game.

Graphically, there’s lots to like. This isn’t a game to play for photorealism but what we get instead is a vibrant visual design with more than a few nods to real-world products and organisations. All this lends itself to the balance in the game’s tone. There are some sections in the game that deal with or hint at some pretty dark stuff, which played straight could make for difficult viewing, but it’s sufficiently lightened by lightness and humour found elsewhere throughout the game’s overall design.

I should mention that the first time I booted the game, via Steam, its executable file got flagged by my anti-malware software and was prevented from running. I’m guessing this is unintended – although it would be pretty funny if not – but I decided to give the developer the benefit of the doubt and allowed it to run. Other than that, I ran into one glitch early on where I needed to transfer some money and the option wasn’t available in the relevant app. A quick reload later and it was fixed.

Of all its elements, the sound and music is perhaps the least noteworthy. In its favour is that it’s not intrusive and is inoffensive, which is a must for games where you might spend minutes scratching your head at a puzzle with it on loop. But it’s pretty standard MIDI-instrument fare that doesn’t add a great deal to the experience. With that said, if the music, sound, graphics, copywriting, design, programming etc are all the work of the solo dev – some, as I understand it, farm out some creative work to contractors – that’s to be applauded.

GREYHAT is Taken meets whatever your favourite shlocky hacker movie is, with a bit of Deus Ex immersiveness sprinkled in. Definitely worth a purchase if you like a thriller, a good puzzle, or if you just want to escape the world for a while to a place where you can control almost anything. We’ll be watching Limited Games in the future – who knows, maybe from inside their network.

GREYHAT was reviewed on PC. Pick up the game on Steam from August 31.