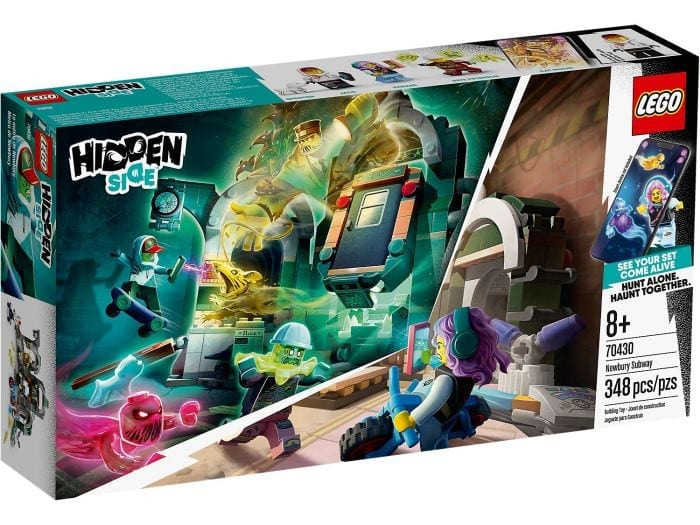 LEGO has been capturing imaginations across the globe since the early 1930s, and just like us, it’s evolved with the times to keep providing us – and our kids – with fun, fresh and exciting play experiences. Last year, LEGO’s Hidden Side collection introduced the world of augmented reality gaming into our playsets, and now the ARG has gone even further – by adding a multiplayer mode.

If you’re not familiar with the LEGO Hidden Side range, the sets utilise an Augmented Reality mobile phone app which allows you to hunt and catch ghosts within the Hidden Side sets you’ve just built. (Check out our review of the first wave right here).

Kicking off 2020 is style, the Hidden Side range has expanded, releasing six brand-new sets for you and your loved ones to build. Keeping with the spooky, spooky theme of the range, the new additions include the Haunted Fairground, Lighthouse of Darkness, Newbury Subway and more.

Thanks to LEGO, myself and my long-time LEGO aficionado Tom Chapman, got to test out the brand-new features in one of the newly-launched sets: Newbury Subway.

Before we get into the multiplayer mode, let’s talk a little bit about the set itself.

Tom, who’d never before built or played with a Hidden Side set, had the following to say: “While we wait for the upcoming release of Ghostbusters: Afterlife, the Hidden Side Newbury Subway Set lets you zap spooks and combine the childhood fun of LEGO in one.

“With more moving parts than your average LEGO build, the Hidden Side Subway takes you into the bowels of an underground world populated by poltergeists.

“Instructions were clear and there were just enough unique pieces to make it a fun-filled journey into the paranormal. I personally loved the cute addition of Spencer the ghost dog!”

For myself, the new set oozes modern style and “cool kid” vibes. From the Minifig with purple hair and headphones to the fully-functional miniature bicycle and skateboard, this is set that’s definitely got a lot of kid-friendly style.

So how does multiplayer come into play? Surprisingly, very easily!

The brand-new multiplayer mode (which is compatible with your existing Hidden Side collection) allows you and your friends to enter into challenges with your pals, whether that be online or in the same room.

Multiplayer mode introduces two new ways to play within the official LEGO app: “Play as a Hunter” and “Play as a Ghost.”

“Play as a Hunter” mode sees you and a friend (either an online friend or one sitting next to you) duke it out to see who can catch the most ghosts within the LEGO set you’ve built.

“Play as a Ghost” mode allows you to join two other “ghost” players online where your job is to hide from a player-controlled ghost hunter.

Both Tom and I had a blast testing out these modes, with us each particularly enjoying “Play as a Ghost.” Setting up and jumping in was as quick and easy as you’d expect for something aimed at children, and neither of us experienced any issues using or operating the Hidden Side app. (For concerned parents, there’s a number of safeguarding measures in place to ensure a very child-friendly way to play online).

The ARG is crafted in such a way as to promote imaginative play despite the use of a phone screen. There’s quite a few places within the app that need you to both be “in the game” and still conscious of the physical LEGO set in front of you, which is a great way to stimulate a fun playtime in younger kids. The use of first-person perspective also helps to really immerse yourself – or your child – in the world of Hidden Side.

Tom had this to say: “It’s a clever way to combine our obsession with phones with the classic LEGO formula. With a smorgasbord of Hidden Side sets to collect, we’re sure to be building our own world of the occult. With more ghosts just around the corner, we’re ‘bricking’ it.”

Excitingly, this is just the beginning for Hidden Side. LEGO has announced that “the app experience will continue to expand with the addition of new ghosts, new game challenges, and randomization of gameplay so the experience is different every time kids play.”

As always with LEGO sets, the prices vary depending on the one you choose. With prices ranging from the top-tier £44.99 to the most basic at £17.99, there’s something for every budget.

If you’re looking for a new way to enjoy LEGO then the second wave of Hidden Side sets are must-have for your collection!