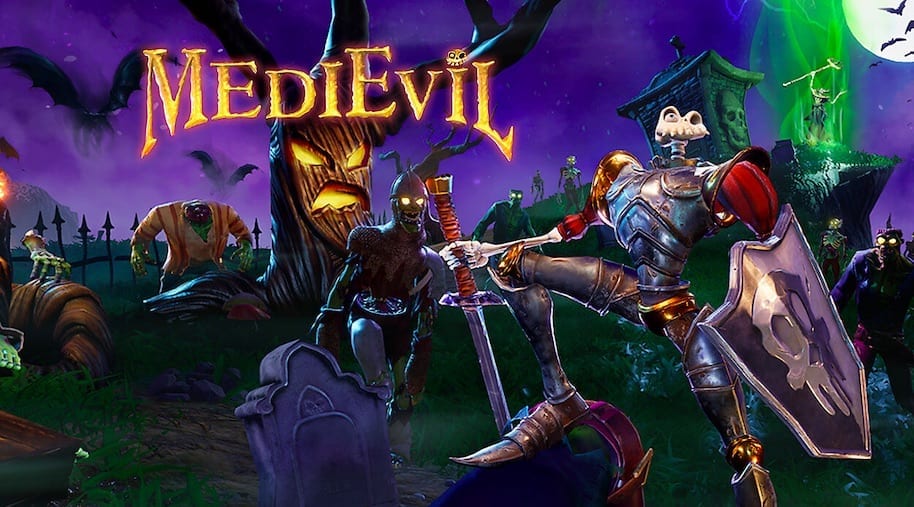 MediEvil is back with a brand-new remake of the classic PlayStation hack and slash. When the first trailer dropped, there were some murmurs of doubt amongst the die-hard fans of Sir Daniel Fortesque and the story of how he was brought back to life. Now that it’s here, what’s the remake of MediEvil actually like? And is it worth spending your hard-earned money on?

Earlier this year, developer Other Ocean Emeryville proudly announced that the game has been remade so closely to the original that 2019 players can use 1998’s walkthroughs and guides, and this is a statement that very much rings true as soon as you start playing.

As many of you will already know, the original game took inspiration from Tim Burton’s The Nightmare Before Christmas. The style of the original games certainly reflects this, with an androgynous antagonist and a very dark, creepy setting.

When first revealed to the world, wary fans took to message boards to share their criticism of the brighter, somehow more ‘cartoony’ 2019 version of the 1998 classic, and there’s definitely something to be said for that.

You could argue that some of the charm has been lost in the polishing-up, as the remake’s definitely lost the roughness of its predecessor. There’s absolutely something really satisfying about the new look though, it just might not be for everyone.

Straight away, you can see just how impressive these graphics are though. The team behind the game have clearly put a lot of love into this remake.

When it comes to remakes of classic PlayStation games (think Crash Bandicoot and Sonic), we always seem to forget exactly how far graphics have come in twenty years. The image in our mind’s eye shows flawless gameplay, so when you play something that’s been remade it’s hard to see just how much time and effort has gone into it until you see stills side-by-side.

The darkness of the sky, for example, may have been easier for the devs at the time (it’s just black), but ultimately led to its charm. This remake IS brighter, but it needs to be. We want to see all the time and effort that’s gone into this game and making it too dark would detract from that.

Thankfully, the newly-recorded voiceovers are true to the original, with Jason Wilson reprising his role as Sir Dan. A lot of the original audio has been retained and enhanced from the original PlayStation’s high resolution audio. In terms of the soundtrack, it was re-recorded by the Prague Symphony Orchestra, so it’s as slick as possible.

As for the game itself, I can only imagine that the majority of those buying this game are doing so for nostalgic purposes. It’s the exact same game that you know and love, just…smoother.

The gameplay is now much more seamless and you can definitely see the benefit of the improved camera system.

You still get to play with a wide variety of weapons including enchanted swords and gigantic hammers which is great to see and enemy types have also stayed the same, including the likes of zombies, pumpkins, werewolves, and gargoyles. However, for as fun and lighthearted as the game looks on the outside, it’s definitely not a walk in the park.

The difficulty level is definitely leaning a little harder towards seasoned gamers, but not so much so that it’ll isolate newcomers to the hack and slash genre.

When it comes to those who’ve never played the game before, personally I feel that the charm of the 1998 MediEvil is still there. In my opinion, this remake will open the crypt door to a whole new wave of fans – as long as they’re prepared to put in a little effort.