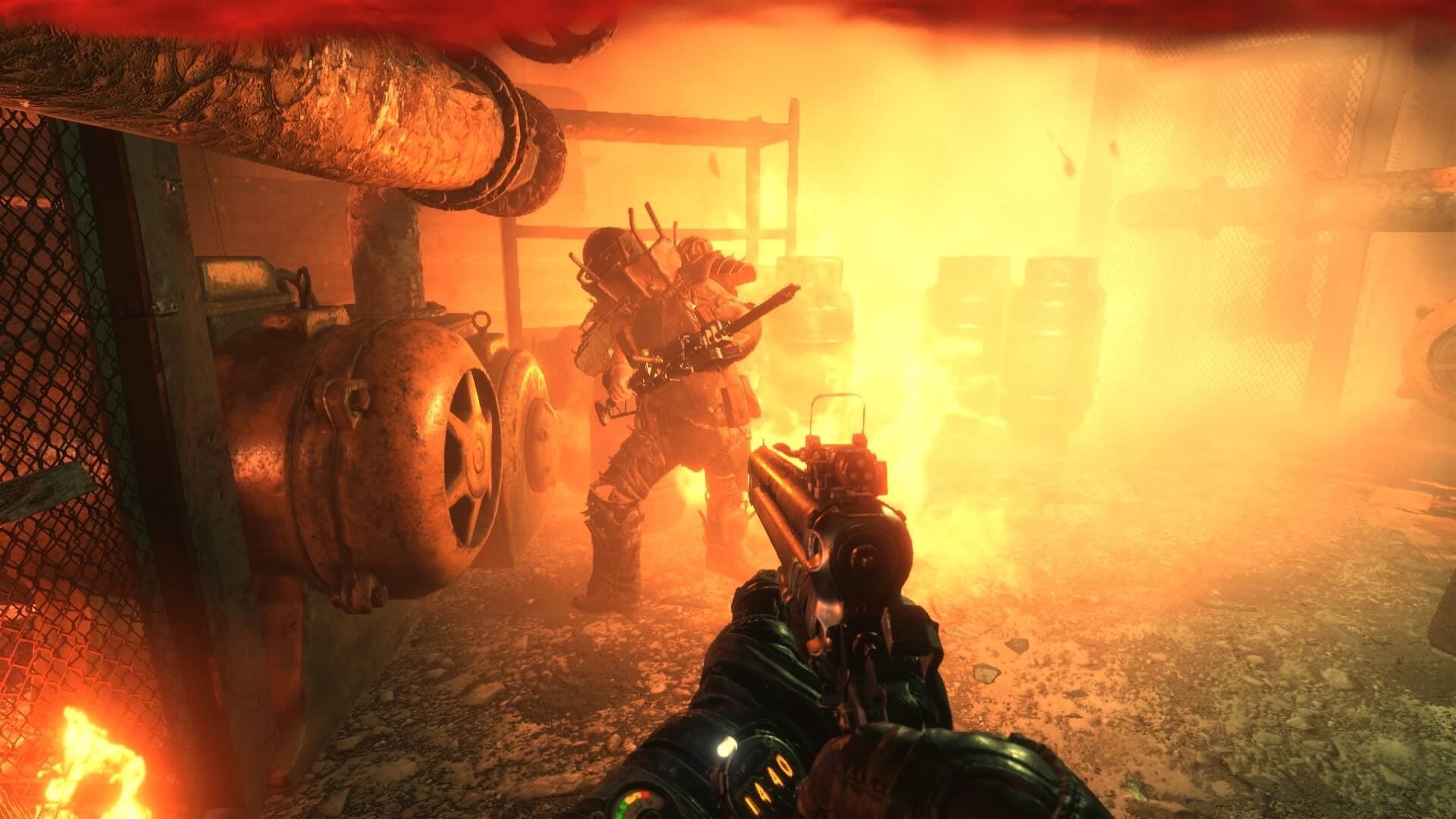 It’s been 8 years since 4A Games introduced us to the horrors of post-apocalyptic Moscow and its ominously hostile environment. From the dark depths of the underground to touching on the hazardous wastes of the surface, the Metro series has created a captivating depiction of a nuclear cataclysm. Based on the work of Russian novelist, Dmitry Glukhovsky, the world of Metro has been transformed into an atmospheric experience that stands tall amongst an abundance of anti-utopian video games. Metro: Exodus is the third title in the series, which promises to free us from the shackles of subterranean Moscow, sending us on a journey of discovery through the Russian wastelands. While trying something different may bring the series to new heights, will Metro: Exodus manage to strike a balance between its enduring formula and new mechanics?

After the events of Metro: Last Light, our protagonist, Artyom, is forced to flee the safety of the Moscow underground after he discovers a secret facility designed to block radio signals from the outside world. After commandeering a train, Artyom and his comrades set off on a journey across country to fulfill his dream of finding a new home, while uncovering the truth surrounding the survival of humankind. Along the way, our entrada must face the dangers of caustic Russia and its residing inhabitants, from mutated wildlife to cultists, crooks and cannibals alike. Surprisingly, this entry into the Metro series strays from the usual doom and gloom narrative, instead focusing on an uplifting tale of pilgrimage and hope of a better tomorrow. Think the Oregon Trail, only with dysentery being the least of your worries.

The story of Metro: Exodus is endearing, providing the kind of follow up fans have been craving since the previous instalment. While our protagonist is still tight-lipped, the rest of the crew have plenty to say and express. If you’ve played the previous Metro games, you’ll recognise the likes of your wife Anna, who joins you and your familiar companions on your journey aboard your train, dubbed the ‘Aurora’. Hearing the thoughts and feelings of your crew will have you establish an emotional connection for the characters, with each having their own bit of personality to share. As you progress through the game, you’ll acquire extra passengers and accommodating carriages, which makes your traveling band feel more like a growing community. Unfortunately, the voice acting can be slightly unconvincing, but if it becomes too much to bear, you can always switch the language to Russian for that world cinema experience. 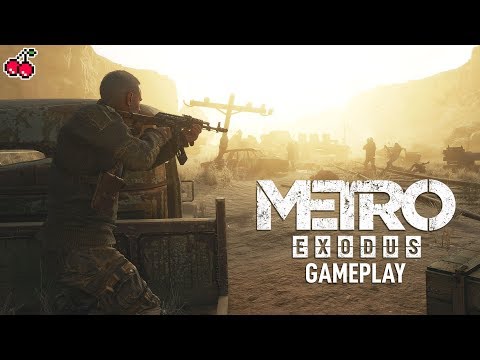 While Metro: Exodus has maintained its structure of procedural progression, each area within the game features an open landscape, providing an element of exploration that is akin to an open world title. This makes for a refreshing approach to the composition of level advancement, as it prevents players from being bored of a linear path, or intimidated by an overwhelming sandbox. As a result of this, the in-game map is simplistic and free from the abundance of markers found in a typical open world game. For some, this will only highlight the fact that there’s not a sprawling amount of content in each area but will provide some relief for gamers with less time on their hands.

Each area will typically provide players with a cluster of optional activities, as well as the main objective marker that will advance the story. While the optional markers are worthwhile for supplies, some encounters feel a bit meaningless. A specific case of this occurred when as a reward for setting prisoners free, you’re provided with a key, of which doesn’t grant you access to anything you couldn’t reach before, rendering it pointless. Luckily, most of your time will be spent executing a siege on enemy territory, as well as venturing into parlous passages that are designed to bring about your demise.

The environment is littered with horrors, such as flying ‘demons’ and mutated wildlife that will keep you from having a pleasant hike through desolated Russia. The situations that you’ll frequently be in are mostly the result of pure dystopia, with the worst of humanity emerging from the chaos. From dealing with the cast of The Hills Have Eyes to encountering the type of scoundrels you’d find in the Thunderdome, the mutants are far from being the most barbaric creatures you’ll encounter.

That being said, there are innocents to be found within the game that have merely been mixed up in the shenanigans of the nuclear holocaust. Choosing to spare these people or engage in combat will change events within the story, for better or worse. This is a great way to implement an element of playability into the game, as it means that multiple playthroughs will provide a variance in experience. Executing actions to gain your desired results may be trickier than it seems, with some so-called innocents often posing some sort of threat to the player. One instance of this is when your backpack is taken by a gang member within the forest area, of which despite having taken your belongings, is not as morally corrupt as he may seem. Paying attention to the context of situations is key to making a moral choice in these scenarios of the game.

Just like its predecessors, Metro: Exodus facilitates the use of both stealth and typical shooter mechanics at the players’ disposal. Each approach will require the player to adjust their strategy accordingly, in terms of resource management and engaging in combat. While there are supposed to be silent ways to take down your enemies, the stealth mechanics are often let down by the inconsistent reactions of enemy AI.

Keeping to the shadows and avoiding the light is key to being undetected, however, this is irrelevant when an enemy can’t see you when virtually standing next to him, while another can seemly see you through a wall. While this isn’t always the case for the stealth-based action, the times that it occurred often lead to the abandonment of subtle engagement.

If we assume that you’re playing this shooter to indeed, shoot things, then you’ll not be disappointed by the range of weapons and customisation that Metro: Exodus has to offer. A wide range of pistols, rifles and shotguns can be equipped, as well as pneumatics, crossbows and throwables. In a departure from traditional in-game crafting, you can now modify your gun on the go, thanks to your trusty back-pack. This means that you can salvage weapon parts from your enemies, tailoring your scope, barrel, and magazine to suit your needs.

This proves to be especially ingenious when in specific situations, where you might need something with a scope, but only have an assault rifle to hand. Combining different weapon parts provides a level of satisfaction that not many games have achieved. It’s also nice that you don’t have to take time away from the action to get crafting, something that can be discouraging for the player. That being said, it is a bit silly that you can stick a suppressor on a shotgun.

As there’s also a large survival element to the Metro series, you’ll have more to deal with than monsters or enemy combatants. Providing you have resources, you can craft medkits, which are the only consumable in-game that can restore health. Poisonous pollution will pose a huge threat throughout your journey, which requires the use of your gas mask and consumable filters, a resource that will have to be carefully managed. This gameplay element manages to be both innovative and annoying, as while it adds an element of survival, it’s very easy to get yourself in a precarious situation when you run out of resources. If you’re in a pinch, you can always deconstruct items you already have, using the gained materials to create what you need most at that specific time.

The presentation of Russia provided to us by Metro: Exodus is as beautiful as it is hostile, with visuals holding up to the standard we expect within modern gaming. Area’s range from the forest wilderness to desert sands, which offer something unique in place of the same scenery repeated over. Each biome has its own unique beauty, never subjecting itself to the stereotypical brown and rust theme that most apocalyptic games latch on to.

Every area is convincing in its portrayal of the environment, with day and night cycles and changing weather patterns making traversing through an area a spectacle to behold. Unfortunately, the PS4 version seems to suffer from performance issues, as a cost for the game’s high-quality visuals, from screen tearing to frequent dips in frame rate. Regardless, you’ll find yourself frequently stopping to admire the view during your playthrough, at least until something tries to murder you.

Metro: Exodus manages to bring fans more of what makes the series great while expanding its potential beyond its original constraints. It paints a perfect image of traversing a ruinous world through its fantastic visuals and suspense driven gameplay. While glitchy AI and performance issues might hinder immersion, it manages to make up for it with its great level design, mechanics and characters. If you’re a fan of great single-player experiences, then you’ll definitely want to consider picking up Metro: Exodus, especially if certain other apocalyptic shooters have been a disappointment as of late.