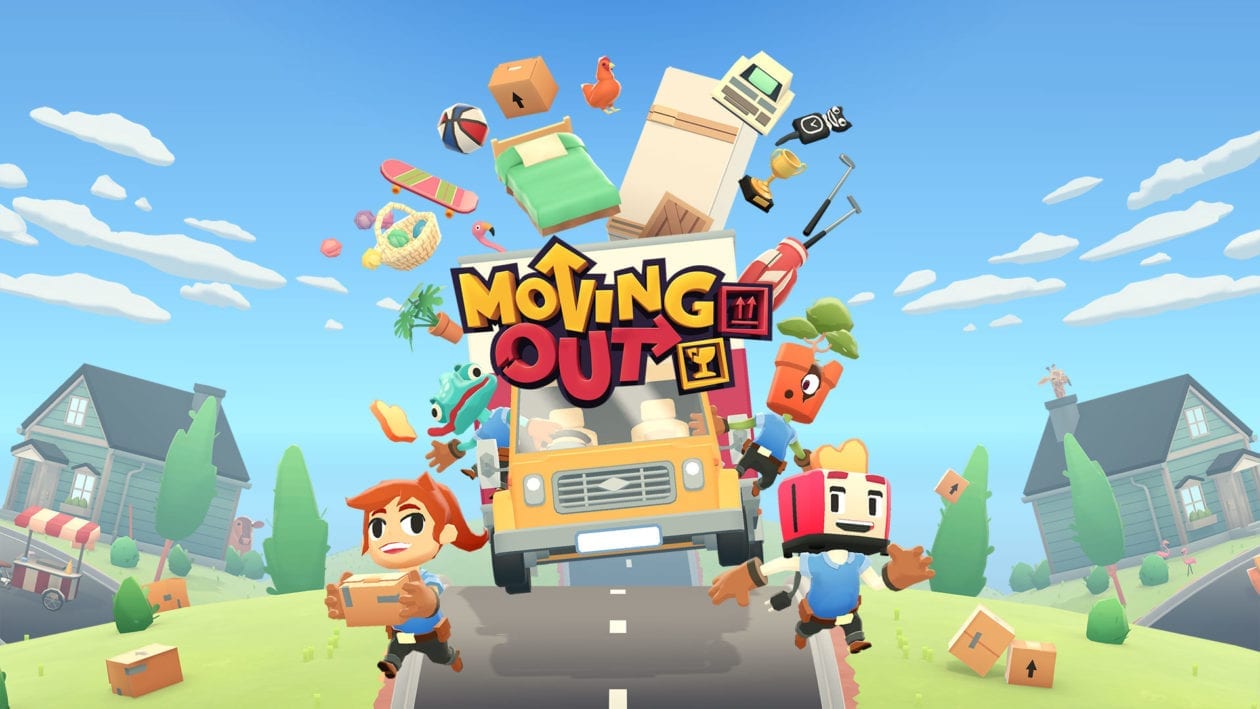 Moving house isn’t really the most fun activity in the world, but throw in some funky lifting and carrying physics, some bright colours and a whole host of kooky situations and you’ve got yourself a charming couch co-op for the ages.

Moving Out is the latest game from developer SMG Studio, and if you’re looking for a new game to make you butt heads with your friends then this is one for you. The premise is simple: you’re a house mover tasked with the removal of furniture, boxes and the occasional farmyard animal. You need to get each of the designated items from any level into the moving truck before time runs out. The catch? The game features ridiculous physics-based mechanics.

There’s more to Moving Out than just moving out, though. As you progress, mini-games get unlocked in the town Arcade, offering you the chance to take a break with some pretty tough platformer-like games. The first, which sees you jump from small block to small block carrying a moving box, had me yelling at my console until I managed to beat it.

The incredibly simple idea behind the game paves the way for a lot of creative fun and flair. From cute and customisable characters (including the ability for your character to be in a wheelchair!) to the weird and wonderful designs, Moving Out oozes charm from its every pore.

Don’t let the bright colours and whimsical graphics fool you though. As with most games of this type, the levels get harder and harder as you progress. It’s on the harder levels that Moving Out really shines, but I won’t spoil what’s in store for you.

As a fan of games like Overcooked, Moving Out has been on my radar for a while, and I’m happy to say the game absolutely delivers. I booted up the game in the mode it’s truly made for: couch co-op.

Though Moving Out can support up to four players, my moving team consisted of two. Tackling each level with my moving partner saw us having to communicate with each other as the clock ran down, desperate to nab ourselves a gold medal rather than a silver or bronze. I would have liked to see more of a need to communicate here, but much less strategy is needed than you might think (at least for the earlier levels).

After giving couch co-op a whirl, I progressed through Moving Out solo. With games like Overcooked, solo mode has never really appealed to me, but playing Moving Out on my lonesome was almost as fun as with a partner.

The difficulty is scaled down nicely if you’re playing on your own, making it really easy to pick up and dive into even without a player two (or three or four).

The zany physics-based mechanics mean you’ll need to put some (but not too much) thought into how you approach each level if you want to earn the highest score. This is helped by the introductory animation which shows off the house/office/farm you’ll be taking on before the level begins. However, you can also just fling couches out of windows and cause as much havoc as you please. Whatever your play style, Moving Out accommodates, though if you’re not fussed about how you rank, you might tire of some of the earlier levels before you reach some of the best that the game has to offer.

The controls are incredibly easy to grasp (having played the Nintendo Switch demo, I can confirm they’re just as simple across platforms) and I can’t see them being a barrier for even the youngest or most inexperienced gamer. You don’t need much more than a joystick and the shoulder buttons, though as the game progresses, more elements (including punching ghosts) are added.

Moving Out goes one step further than most by being as inclusive as possible for its players. The game can be played in “Dyslexic-Friendly” mode, which changes the font, and – as mentioned above – your playable character can be using a wheelchair. Another point I noticed was that the finger used in the game map to point the way was that of a person of colour. Nice job, SMG!

The game doesn’t come without its flaws though, and for me, the biggest barrier with Moving Out comes strategy. Games like Overcooked are incredibly fun for me because they require a lot of planning, delegating and strategising. Though Moving Out does definitely include some of these elements, they take a while to come into play. I’d like to see harder levels sooner, and I’d like to have to negotiate more with my player two. Other than “get the biggest items first,” not much IRL planning was needed until much later into the game. By that point, my player two was beginning to find the game a little boring.

All in all, Moving Out is a stand-out party game for kids and adults alike, though it can take a while to get into. The first few levels of Moving Out are almost too easy (though I imagine two adult players will have a very different experience to two adults and two kids, or four drunk adults). However, the later stages definitely do a lot to make up for this!

Moving Out is available from April 28 on Nintendo Switch, PC, Xbox One and PlayStation 4.