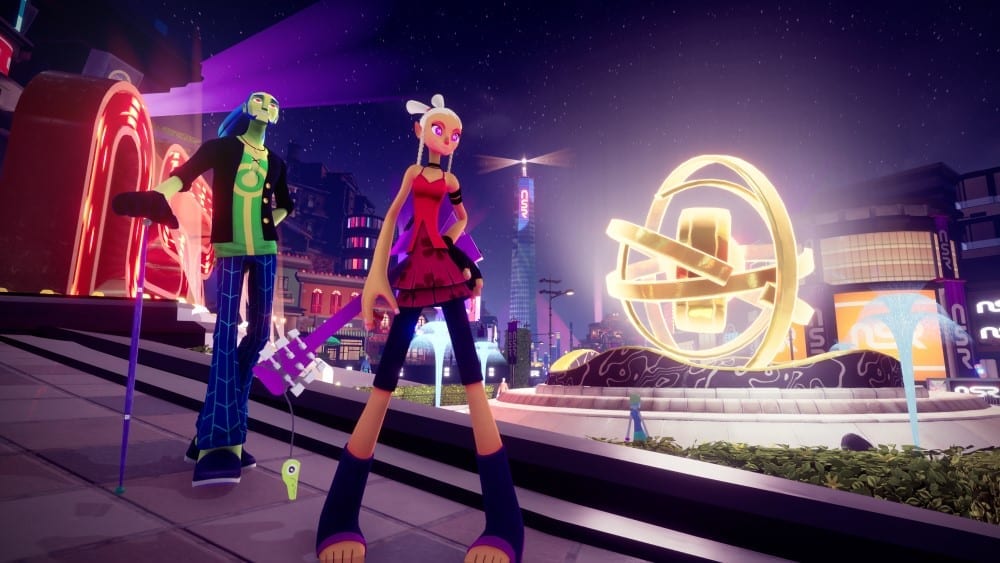 No Straight Roads is one of the most highly-anticipated indie games of 2020, promising high-octane rhythm-infused action set against some of the most gorgeously designed levels in gaming. Though it’s ticking all the boxes for aesthetics, how does No Straight Roads hold up as the whole package?

No Straight Roads takes place in a futuristic world powered by Electronic Dance Music from an evil company known as the NSR. The NSR and its music hide a sinister secret though, and it’s up to our heroes and playable characters, Mayday and Duke, to bring Rock and Roll back to save the people of Vinyl City. The story is definitely unique and very fun, with well-crafted characters and some great dialogue. This is a game which is dripping with cheesy lines and cringe-worthy text, but it fits in very well with the overall style of the game.

The game’s graphics, style and music are about as close to flawless as you can get, though there’s definitely some technical downgrades made to pack this game onto the Switch. The game worlds really pop, teeming with bright neon colours and lots of life thanks to the intriguing enemy designs and the many other characters you’ll meet on your quest.

As you’d expect from a game which utilises rhythm-based mechanics, the soundtrack for No Straight Roads is absolutely brilliant, with a range of amazing tracks that wiggle right into the brain. The music really suits the aesthetic of the game and it doesn’t disappoint – especially when it comes to its delightful use of head-bopping EDM.

Though No Straight Roads excels in many areas, its gameplay leaves a lot to be desired. The game promises rhythm-infused combat, but outside of the tutorial level it was rare that I found the battle mechanics and the music to go explicitly hand-in-hand. This was definitely disappointing, as I was expecting to see more of this foundation implemented within play.

Levels were needlessly difficult with no option to scale down the difficulty, making for some truly tedious battles with no ability to save your progress. I could be right at the end of a 10 minute battle sequence only to die and have to start right back at the beginning of the section, repeating the same actions again and again.

Figuring out your objective and learning enemy attack patterns feels more like a guessing game of trial-and-error as opposed to a well-planned game mechanic. This makes No Straight Roads feel pretty tough without feeling rewarding.

The dual characters were also a source of frustration for me. I’d tend to play with Mayday, only swapping to Zeke when Mayday was close to death. If I failed to swap characters before one died, I’d be booted out of the level despite having another playable character with full health.

In combat, the AI was worse than useless, often picking up and using healing items that I needed for my main, despite them being at full health themselves. They also provided absolutely no help in battle, mostly just getting in the way. Thankfully the game supports couch co-op, which is definitely needed here.

Outside of the battle sequences, No Straight Roads is surprisingly RPG-like, complete with collectibles, a skill tree and more. The world of Vinyl City is so vibrant and fun to wander around despite its areas being pretty small.

The game sadly lacks a lot of accessibility options, with no way to change difficulty levels or make the game any less of a grind. Because it uses rhythm in its core, it’s not the ideal choice for deaf players or those who are hard of hearing, although some enemies do have visual cues as well as audio.

I really wanted to love No Straight Roads but its overly complex combat made playing through the game more of an upward battle than an enjoyable romp. Even the game’s amazing soundtrack got tedious when repeating a level for the 10th time in a row – something that could easily be fixed with additional save points.

I want to note that I had more success playing through levels with the Nintendo Switch docked and using a Pro Controller, so it’s possible that the handheld experience just makes the game struggle that little bit more.

Though No Straight Roads is filled to the brim with character and style, it can’t overcome its needless complexity in a game which is more taxing than it is fun.

No Straight Roads releases on the Epic Game Store and Nintendo Switch, August 25th. A physical Switch release is due in September.

No Straight Roads was reviewed on Nintendo Switch.