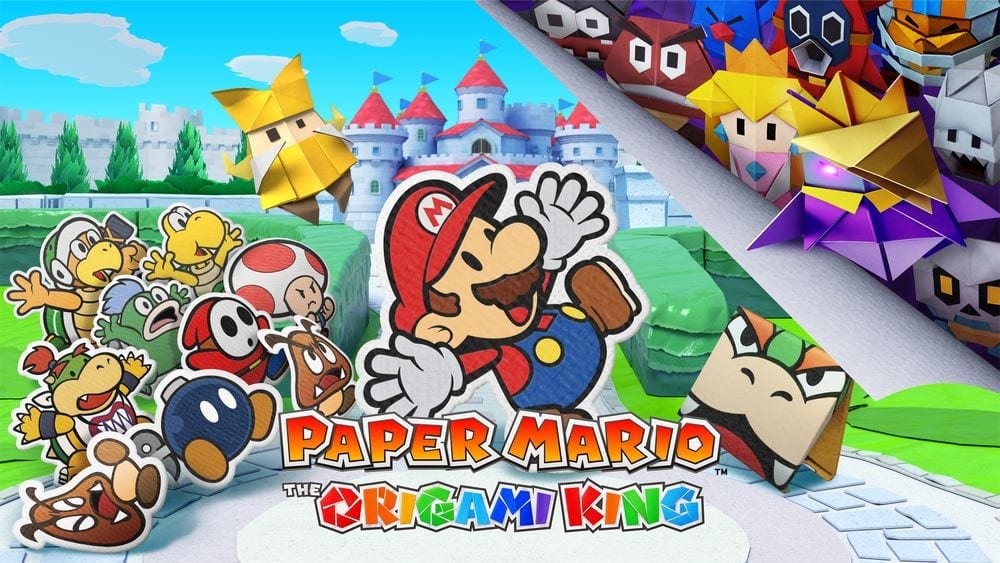 I watch in awe as the charming 2D figure of Paper Mario whips out a pair of origami arms (orig-arm-i?), takes hold of a huge Chain Chomp Stapler and, without a moment’s hesitation, beats it up, knocking out its staple teeth. Brutal. It only serves to wrap me up even more Paper Mario’s charms.

With its crafty aesthetic, a personality that shines through the gameplay and writing that had us creasing, has Paper Mario: The Origami King finally nailed down what makes the beloved series so good? Or is it just another disappointing doodle in the Mario sketchbook?

What’s The Gameplay Like In Paper Mario: The Origami King?

Paper Mario: The Origami King is the latest instalment in the Paper Mario series. These beloved Japanese role-playing games (JRPGs) have had a tumultuous history, evolving their genres and formulas on a whim. Paper Mario began life as a simple turn-based JRPG for the Nintendo 64. The GameCube sequel, Paper Mario: The Thousand-Year Door, was a critical success. The next game, Super Paper Mario, became an outright platformer. Card and sticker-based adventuring was the aim in the controversial Paper Mario: Sticker Star and Paper Mario: Color Splash.

Without a doubt, this game is a gorgeous crafty adventure that borrows the best bits from every Paper Mario game so far. It’s ambitious enough to introduce its own elements to make it feel like a brand new game. It’s packed to the brim with charm and wonderfully self-aware humour, building JRPG elements into a turn-based, puzzle combat system.

Unfortunately, two key components that solidified the Mario experience across the decades – the satisfying ‘combat’ and the freedom of the controls – are missing from this charming adventure, which brings it to a painful halt. The pace reminds me of a felt tip that’s running out of ink. Everything seems fine to begin with, but it quickly dries up.

Paper Mario: The Origami King kicks off battles with a familiar turn-based system. Except now, you’ve got 360-degrees to work with, which leads to some interesting tactics. You can use the rotating rings to line up the enemies in a straight line to attack with Mario’s iconic stomp attack, or line them up 2×2 to attack with his hammer.

This is an intriguing twist on the Paper Mario formula and, in theory, it should work well. However, each battle suffers from a distinct lack of a threat – if you run out of time whilst working the puzzle out, the battle will just take a little longer to play out. Whilst the difficulty ramps up in late-game, these repetitive, easy skirmishes for the first 20 hours don’t do enough to keep players engaged (en-page-d? Boooooo.)

One thing I did like about the combat was the Toads that fill the bleachers. Scattered throughout the world are hidden Toads in need of rescue. If you open your heart to the plight of the unfolded Toads, they will cheer you on and can help you out in the battle by tossing items and repositioning the enemies Mario is facing. This mechanic takes inspiration from The Thousand-Year Door, where you had to earn the help of Toads by saving them from enemies armed with rocks in the bleachers. Paper Mario: The Origami King is a watered-down version of what made The Thousand-Year Door great, and that’s doesn’t just apply to the battles.

The Exception To This Are The Boss Battles

I watch, horrified, as The Dual-Bladed Duelist reveals a huge Goomba made out of the snipped-out faces of all the friends I’ve made on my journey. It’s the stuff that would make Alfred Hitchcock cry, and I almost forgot that I was meant to be playing a child-friendly Mario game.

Boss fights still use the ring-based, turn-based combat of all the other battles in the game. But they spice things up – Mario is on the outside of the ring, whilst the boss is in the middle. To win against these crafty foes, you’ll need to arrange arrows on each ring to lead Mario to the boss, where an attack or action icon will automatically cause damage. The type of attack depends on which icon you lead him to, which keeps these battles feeling fresh.

These puzzles are engaging (en-page-ing?) and offer a much more complicated experience. If the game had scrapped regular battles in favour of traditional turn-based JRPG combat, like in Paper Mario: The Thousand-Year Door, and just kept ring-based boss battles, it’d be a much more pleasant experience. This seemed to be my experience throughout my playthrough – whilst I tried not to compare The Origami King to past Paper Mario titles, I couldn’t help but notice my criticisms of simplicity and shallowness apply to multiple aspects of The Origami King’s gameplay.

Yes, I did! I had a lot to say about the gameplay, so congrats if you’re still reading this far down.

Mario’s jumps are perhaps some of the most iconic game mechanics in history. Admit it, you just heard his jump sound effects. That’s ICONIC. He’s renowned for his acrobatic leaps and the height he can gain in 3D games, which open the world up for exploration. This has followed the plucky plumber since his debut in 1981. The jump is a staple of the series, giving Mario games their sense of adventure. Mario was originally called Jumpman, for crying out loud.

While I adore the 2D graphics and dynamic origami shapes, the limit on jumping stifles the sense of adventure I look for in a Mario game, let alone a JRPG. This constant invisible wall above Mario stops me wanting to explore places and makes the narrative feel very linear. Paper Mario: The Origami King has, for a series-first, opened the world. So it’s very disappointing that this is the case.

It’s a personal thing, but the controls of the 1000-fold arms are also much better when you turn motion controls off. It feels more impactful, less paper-thin. I’ve not marked it down for reverting to motion controls, because it’s easy to turn them off in the settings. It’s just a top tip from me to you if you want to max out your enjoyment.

What Are The Graphics Like In Paper Mario: The Origami King?

We can’t review a Paper Mario game and NOT talk about the graphics, can we?

It’s even more gorgeous than the trailers made it out to be. I’m a huge fan of striking art styles in video games, so I’ve loved Paper Mario since I was a kid. I can say with confidence that Paper Mario: The Origami King is the prettiest of them all.

It reminds me of when I was younger, raiding the crafts box at school during art classes. The bright vivid colours, the different textures and attention-to-detail when it comes to different assets are mindblowing. The charming origami graphics are delightful, coins and doors are made from chunky corrugated cardboard, rivers and waterfalls crash with amazing blue-paper, Peach’s Castle has shiny foil detailing, I could go on. I often found myself exclaiming to my partner with pure joy when I came across something new. It’s not often that a video game evokes such a joyous, child-like reaction in me, a hardened and cynical 22-year-old, but Paper Mario manages it every time.

As you make your way through the overworld, you’ll begin to notice even more animation details. Small instances, like how Mario dusts his overalls off after falling into a bottomless pit, or his little celebration when you line enemies up perfectly, all work in beautiful harmony to bring this paper world to life.

What’s The Narrative Like In Paper Mario: The Origami King?

Paper Mario has almost always excelled when it comes to engaging narratives and Paper Mario: The Origami King is no different. The writing had me bent in half with laughter; with wonderfully self-aware lines from the Origami King’s sister Olivia, who acts as your companion, I found myself cackling out loud at certain points. It is, without a doubt, one of the funniest games I’ve ever played.

As you might have guessed, the theme of this title is ‘origami’. The Origami King, a worryingly familiar fascist dictator, is actually terrifying at points. In his introduction cutscene, he reveals a Goomba who he turned into a Folded Soldier. This sounds normal, but the dialogue from this Goomba reveals it’s the same fangirl Goomba you met in the dungeon five minutes ago. I genuinely started crying at this point. In case you were worried about this game being a little bit TOO one-dimensional.

The Origami King descends upon the paper Mushroom Kingdom, kidnapping Peach and whisking her away on his magical streamers. It is, of course, Mario’s job to get her back. This narrative might make you roll your eyes. But I very quickly got wrapped up and couldn’t help but turn the page. Its storytelling is outside the box and playful, which gives it full cherries from me.

But Is It Worth Your Money?

Overall, the charm, colour and wit of Paper Mario: The Origami King outshines its repetitive gameplay. It’s a truly enjoyable experience. The combat brings this game down; its unfulfilling, low-stakes nature meant that I never felt like I had to make any meaningful choices during my playthrough. For a series that’s fairly certain it’s a JRPG, this is a real shame. The ring battle system, whilst ambitious, falls flat. There’s a lack of strategic depth needed to make for an excellent puzzle game. But there’s also no sense of progression to make it a satisfying JRPG. The visual design of the world and the laugh-out-loud writing is top-notch, but not quite enough to paper over the cracks.

Paper Mario: The Origami King was reviewed on Nintendo Switch.