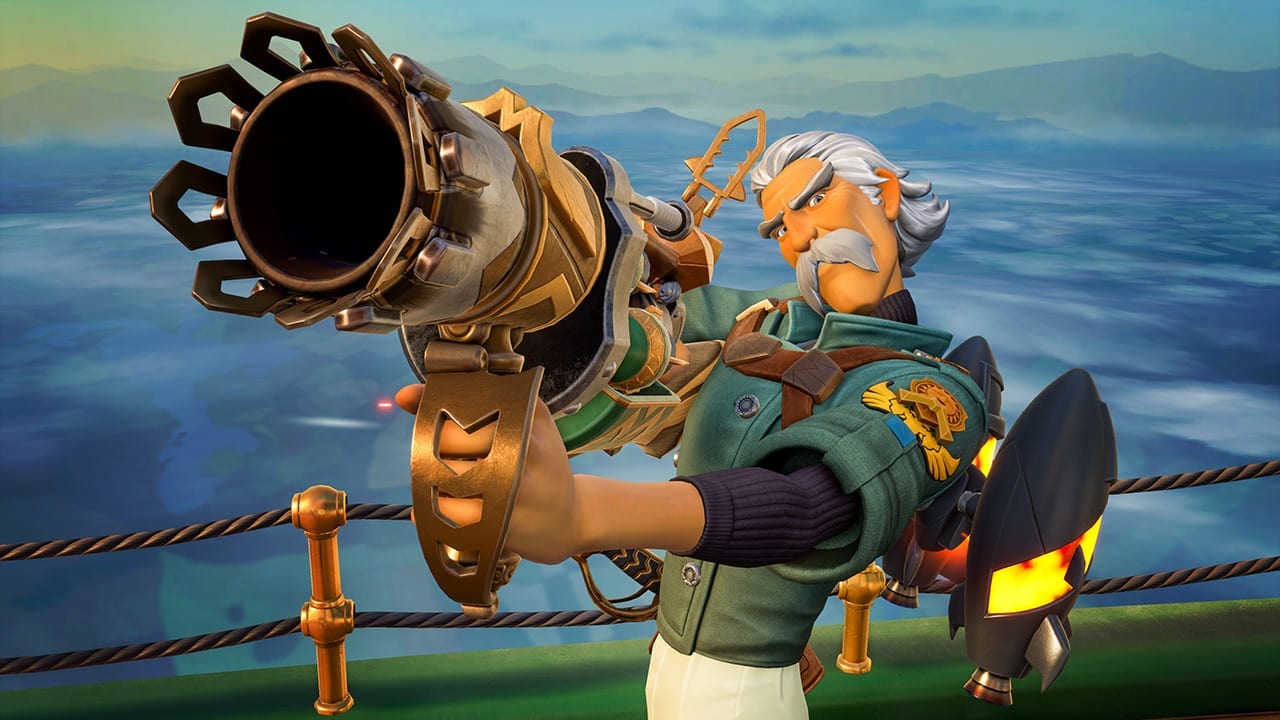 As I go flying out of the arena for the umpteenth time I spot where a member of the other team is heading to from the air. When I land back onto the ground I know exactly where to go and make a beeline for there, hitting a combo and delivering a much-needed KO.

Rocket Arena has its similarities to other games you’ve played before, but not necessarily in the third person shooter genre. If you can imagine Overwatch meets Smash Bros. with rockets then you can start to understand it on a base level, but it’s so much more than that.

HOW DOES IT PLAY

There’s no deaths in Rocket Arena. Instead you are knocked out of the arena after taking too much damage. If you can get away from the attacks of the other team for long enough then health will replenish but that’s easier said than done. Luckily most characters have a special move that helps them get out a bind quickly, something you need to get used to using. Some can teleport, others can run fast but all of them are there to be used, just remember there’s a cooldown and use it only when you need it.

Each character also has a primary and secondary attack, the latter also with a cooldown. The way to eliminate your opponents is to hit them with as many rockets as possible to fill up their meter. Once that’s done get one more shot on them and see them go flying out of the arena. Item pickups litter the arenas that make the process of elimination or surviving a little easier.

So once you get to grips with how the game works you can just sit back and enjoy the game right? Wrong. Each hero has different kinds of rockets and quirks that’ll make them suit some players more than others. Plink has rockets that can fire fast and he’s great at getting behind enemy lines but he also gets hit with a Megablast – which leads to a KO – far too easily. Izell hits hard and is extremely mobile, she quickly became a go-to of mine in my favourite game mode.

That’s another nice thing about Rocket Arena. Maybe you don’t enjoy Team Deathmatch, or Capture the Flag modes. That’s fine, you’ve got two more to choose from in Treasure Hunt and Rocket Ball. Treasure Hunt is a bit of a King of the Hill-like mode where you pick up a treasure chest and try to keep hold of it for as long as possible to fill the coin meter of your team. The whole mode isn’t just keeping hold of the chest though. After a while the chest disappears and there’s an opportunity to jump around the arena and collect coins to try and give your team a chance of winning. It turns the focus of the game from shooting and evasion to platforming and collection, and is quite fun.

Rocketball was the highlight of the game for me. A ball appears in the arena and it is up to you and your team to get it into the opponents goal. Sometimes you can do this by brute-forcing your way through and simply blasting the team away but sometimes speed and stealth work just as well. Each arena requires a different tactic too, meaning it isn’t just a case of “one technique fits all.” You can even throw the ball if things start to get out of hand, which can lead to some audacious goals.

The only mode that didn’t click with me was Mega Rocket. It’s a fairly standard Capture the Area mode but currently it feels like areas capture far too quickly. On more than one occasion it felt pointless even trying to contest an area because it had spawned near the enemy and there just wasn’t a way to get across the map fast enough. It’s something that could easily be tweaked in future updates to require a little more time to capture the points, but in its current form it’s the only mode I have no interest in really playing.

Luckily the core of the game works as it needs to. Rocket Arena is addictively fun and all its modes cause frantic scrambles across the various arenas, which each have their own quirks and hiding spots. The characters are bubbling with personality, with new ones coming after release for free, and the whole experience is super bright and bubbly.

There’s still room for improvement though. Accessibility-wise the options there are good but not great, with text to speech options and high contrast subtitles. There’s not much customisation you can do with the choices there and no options for colourblind gamers. It’s a decent start though and hopefully we see it added to in the future.

It’s also impossible to know how much value for money there will be in the battle pass until it goes live. There is a premium currency called Rocket Fuel that you can buy, costing up to £79.99 GBP, but there doesn’t really seem to be much need to ever buy it. Everything but the battle pass, called a Blast Pass, is purchasable with currency you earn by just playing the game. There will be ways to earn Rocket Fuel in the game though, and through the battle pass, so if you find yourself enjoying Rocket Arena it could be that you never have to spend real money on these transactions, which is how it should be.

Some people don’t have the patience to grind and earn in-game currency and would rather buy things instantly. You can choose what currency you use to purchase most items but, for a game that isn’t free-to-play, it may put some off purchasing the game. It never feels pay-to-win though and the items, minus the Blast Pass, seem to be purely cosmetic. There’s still plenty of in-game unlockables available from just playing too.

A BLAST AND A HALF

Rocket Arena is a blast to play. As someone that often steers clear of competitive shooters Rocket Arena is an experience that I genuinely enjoyed and plan to return to for a while. Even when I was getting my backside handed to me I was still having fun. With it having cross-play it should hopefully find a dedicated community and I hope to be a part of it for some time. Especially if it continues to evolve and improve itself in the way that the developer has promised.

Reviewed on PC. Rocket Arena is also available on PlayStation 4 and Xbox One.