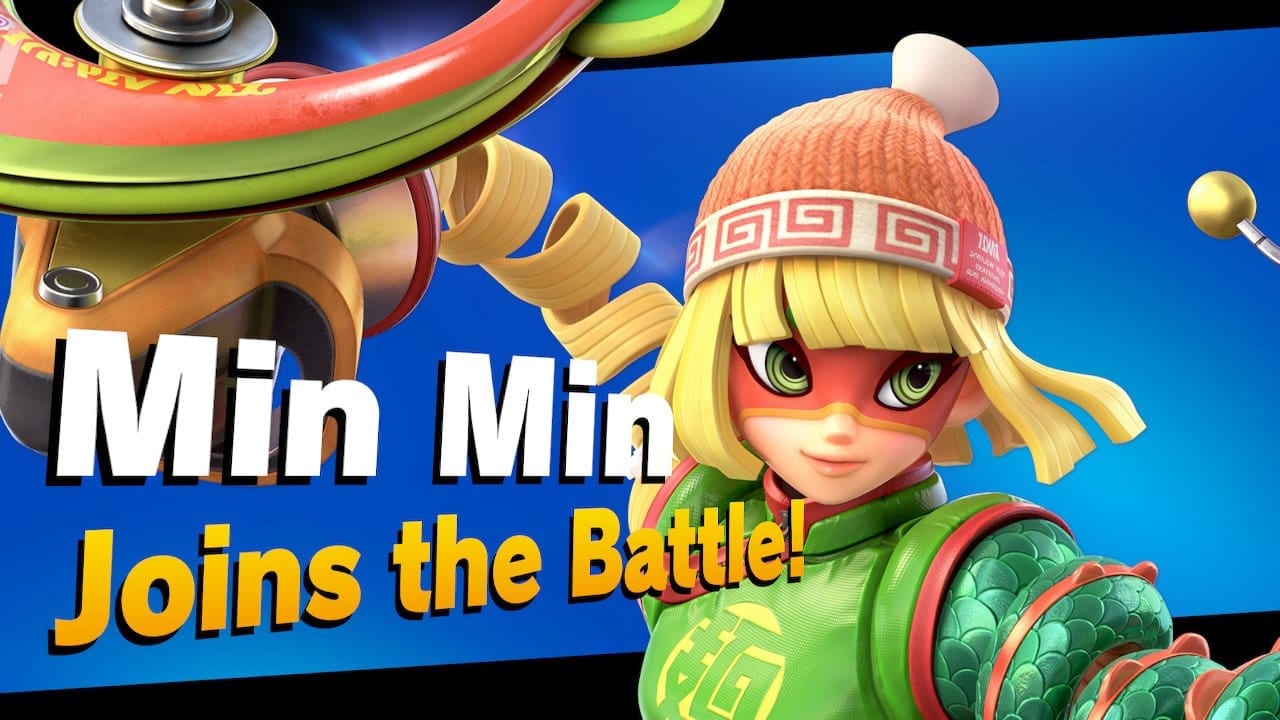 The highly anticipated Vol. 2 of the Super Smash Bros. Ultimate Fighter Pass DLC has finally arrived on Nintendo Switch. Min Min, a member of ramen royalty from ARMS, blazes onto the roster as the 81st fighter, with an incredible move set and a spring in her step. But what is she like to play?

Well, first up – a bit about the Smash Bros Ultimate Fighter Pass. Vol. 2 is a beast of a DLC, giving you access to six Challenger Packs as they’re released. They’ll be distributed sequentially by the end of 2021, so there’s going to be plenty for you to try out! Each Challenger Pack comes with a new fighter (the rest are yet-to-be-announced), a new stage and multiple music tracks. 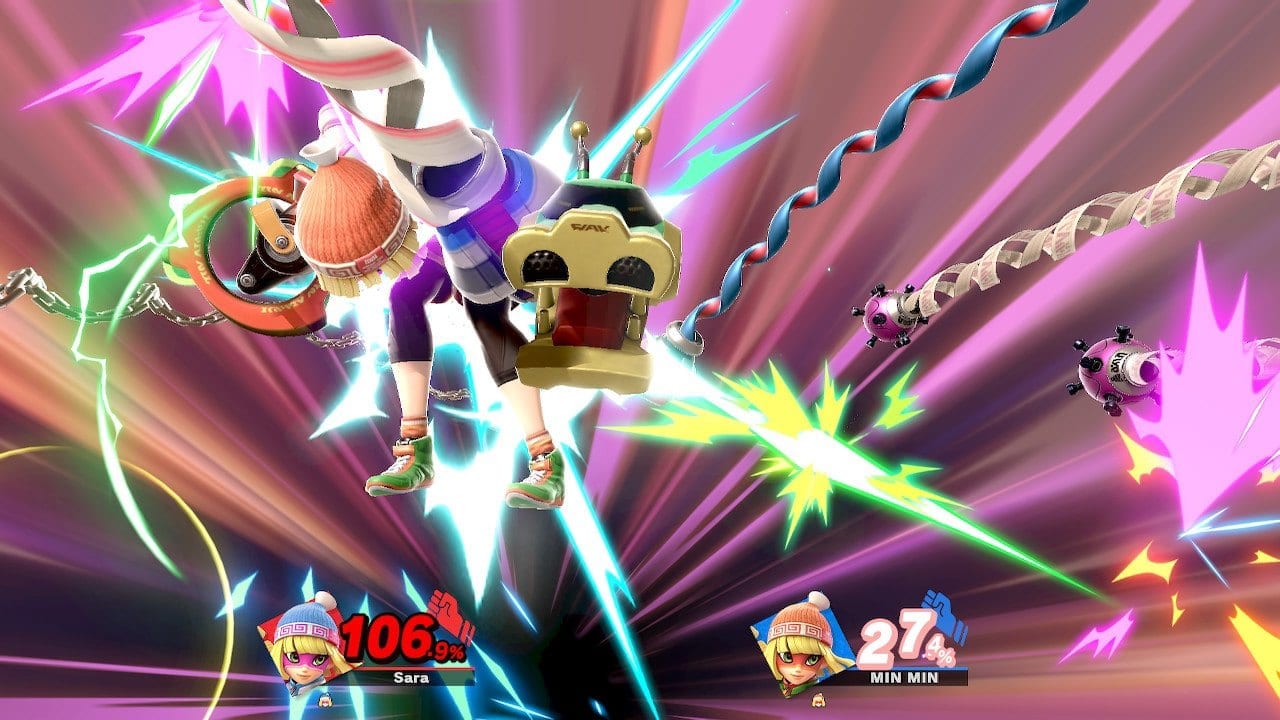 The bounce and bravado of Min Min is a force to be reckoned with. Anyone who is a fan of ARMS will know her humble beginnings. Starting as a ramen-loving employee at the Mintendo Noodle House, she rose to stardom after her knockout performance as a champion contender in the ARMS Grand Prix. Min Min’s fighting style in ARMS has translated well to Super Smash Bros. Ultimate, but it will take time to master. Read on for an overview and some tips to help you pack a punch on the battlefield!

The past DLC introduced playable fighters that differ from the main cast due to a ‘gimmick’. Joker, Hero, Banjo & Kazooie, Terry Bogard and Byleth all a unique playstyle, but Min Min is by far the most… unique. Her move set is very faithful to her attacks in ARMS, but this means she plays a little different from other characters. But if you’re a Shulk main, you’re at an advantage. 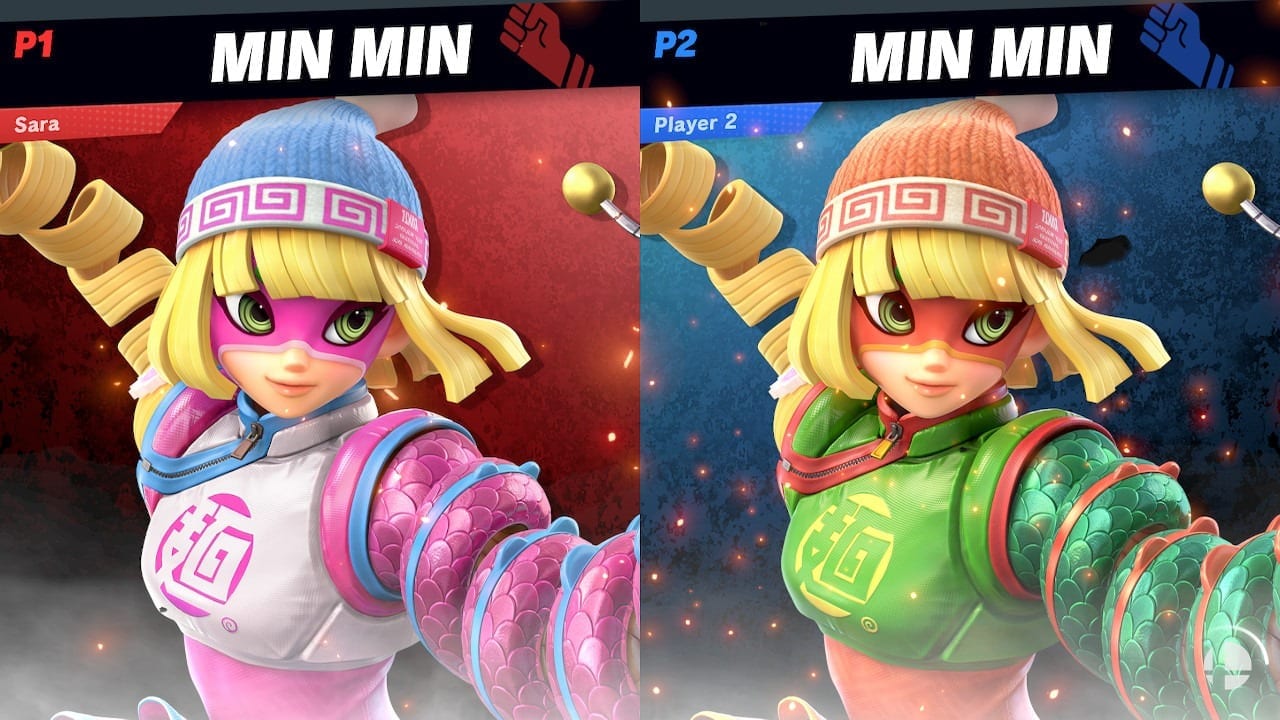 All of her attacks are dependent upon the set of ARMS she has equipped. Her ‘down-B’ special attack is key to swapping out your ARMS, and it’s certainly a skill you’ll need to master if you want to get good. This can be fiddly at times, but once you practice with the precise input, it gets a bit easier.

The Ramram, the Megawatt and her laser-firing Dragon ARM are your weapons of choice. Her left arm is always carrying the faithful Dragon, capable of firing a devastating laser across the stage after being extended. Her right arm is focused on cycling through the aforementioned ARMS. If you like to play characters with range, Min Min is for you! These long-range punches and side tilt attacks can extend across the battlefield to pack a powerful punch and can be angled with input after executing. 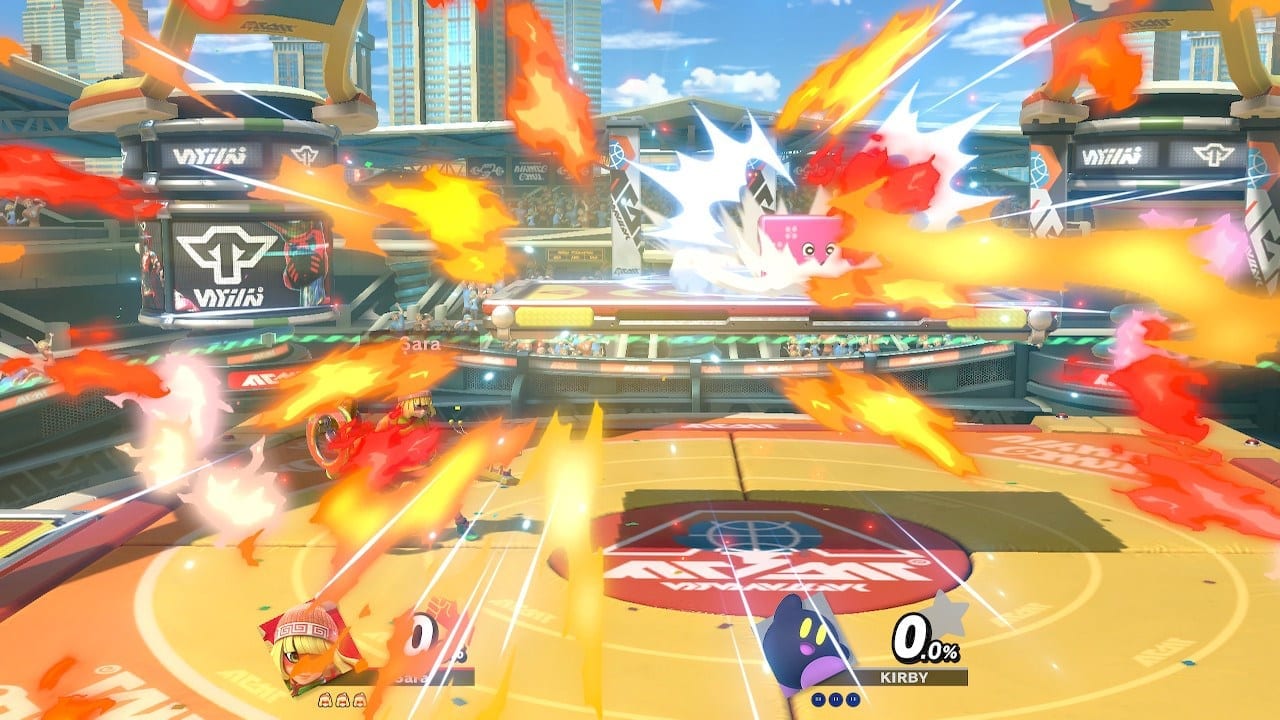 That’s right – we said ‘left arm’ and ‘right arm’. This is where it gets interesting. Min Min doesn’t play like other Smash characters. Players will need to get used to the fact that she doesn’t have a traditional set of special attacks mapped to the B button. Instead, the A button controls her left arm and the B button controls her right arm. This means that each arm can be controlled individually and used to access a diverse range of tools. It also leads to some pretty interesting combo attacks! These will be KEY if you want to master Min Min.

Her ARMS can also do another cool thing, which took a bit of getting used to but helped me out massively. You can input both of her ARMS to attack whilst moving, which is great for maintaining pressure on your opponent. If someone tries to attack after you land a charged smash attack, the other ARM can defend you. This leads to a high-reward strategy, without any of the high-risk. Ganondorf could never.

Like I said earlier, there are three different ARMS Min Min can equip. These are as follows:

What Else Is In The Smash Bros Ultimate Fighter Pass Vol 2? 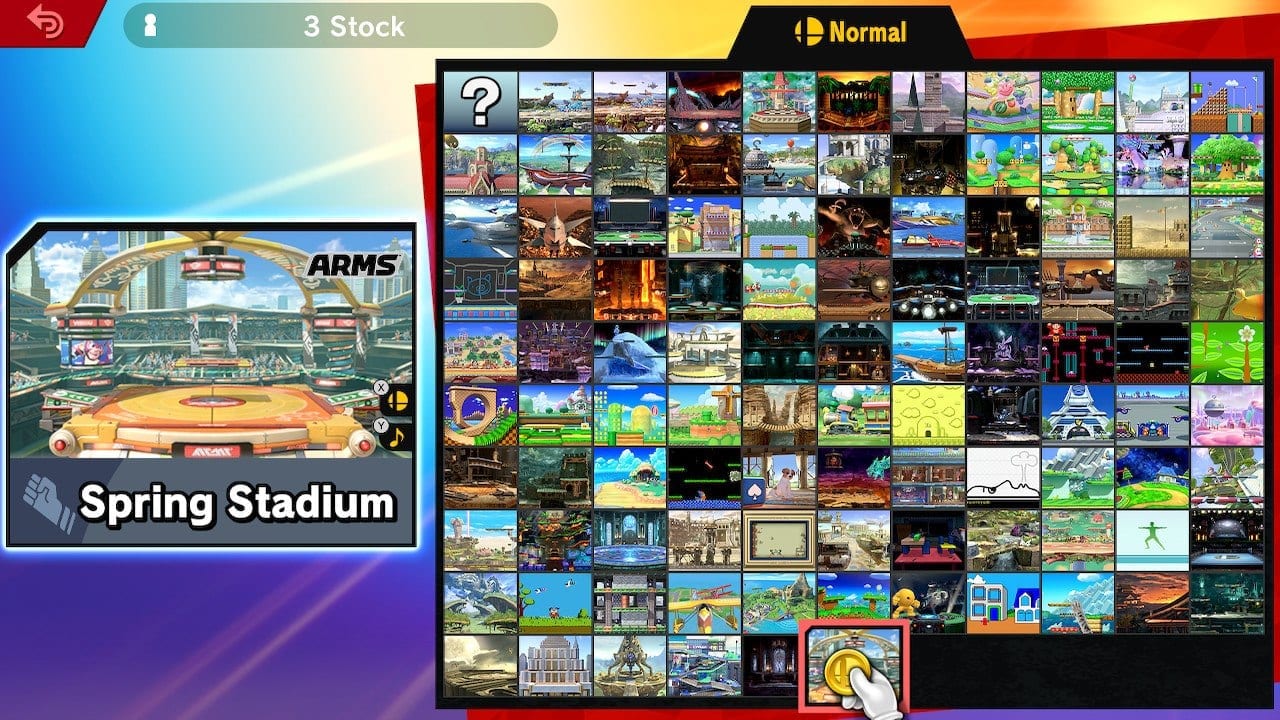 The first Challenger Pack in the Smash Bros Ultimate Fighter Pass DLC also comes with a brand new ARMS stage called Spring Stadium stage, as well as 18 music tracks from ARMS. Spring Stadium is gimmicky, but a great stage which I had a blast jumping around on. It has launch pads on the side and ceiling arches, and once you use them, you have the ability to damage opponents when making contact with them. Paired with Min Min’s insane range, it leads to some incredible hype moments. Iconic as they are, it’s a shame that 16 of the 18 music tracks are lifted from ARMS initial release in 2017. 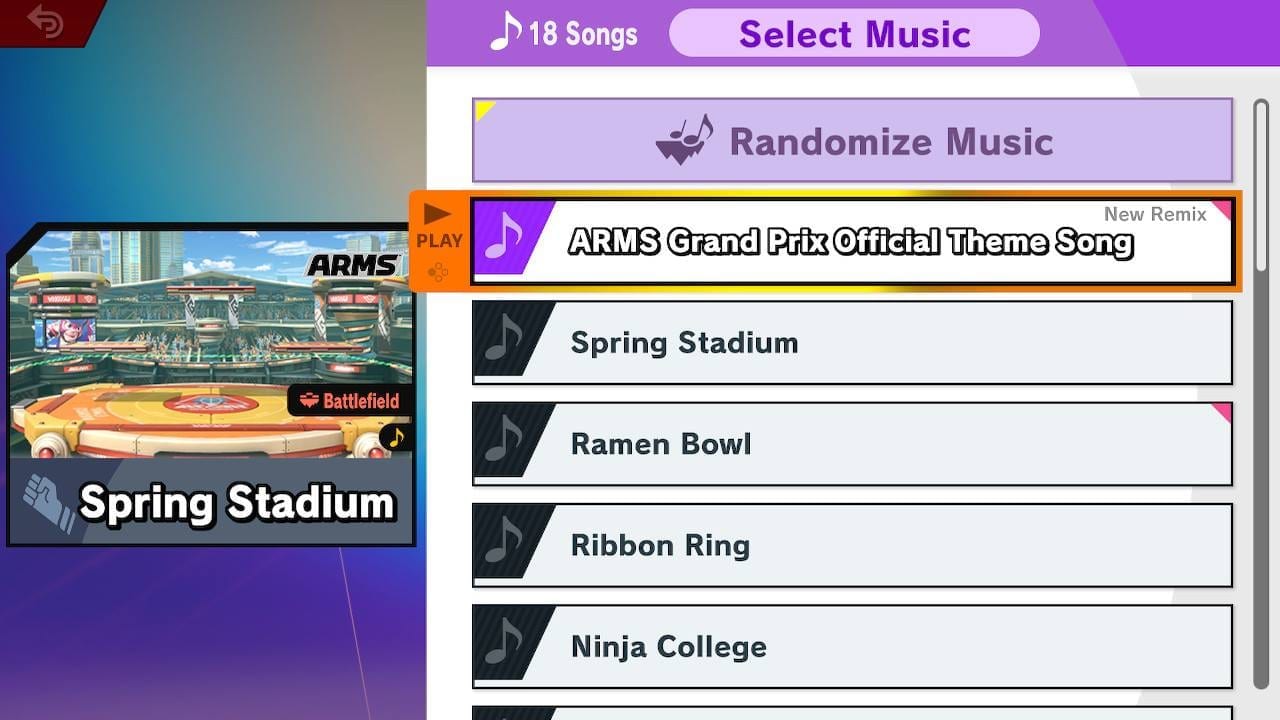 Overall, Min Min is a welcome addition to the Super Smash Bros. Ultimate cast and a very strong start for Fighters Pass Vol. 2. Practice enough with Min Min and you’ll be able to land some devastating blows. But the best news is that there’s still five yet-to-be-announced fighters and stages, and if they’re anywhere near as creative and unique as Min Min, then we’re in for a treat. If you’re in the UK, you can buy it here.