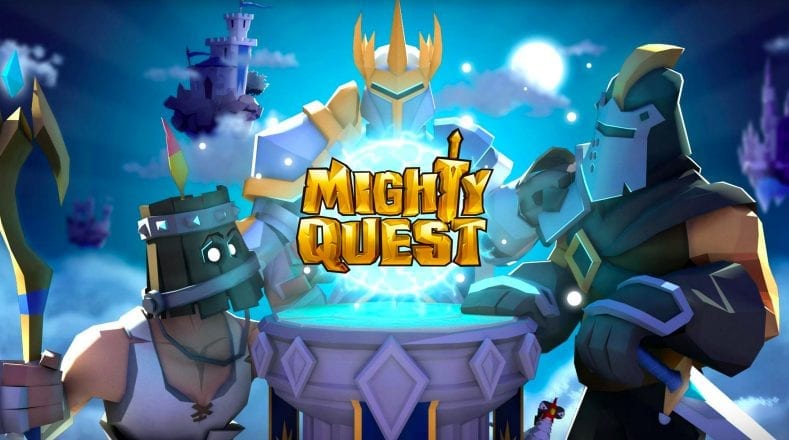 The Mighty Quest for Epic Loot is a mobile game from Ubisoft and is perfectly described by its own, slightly lengthy, title. You quest through floating castles in the sky collecting loot and killing enemies to be able to then do that again but a little more challenging. The grind is real and I love it.

After getting my hands on the upcoming mobile game (releasing July 10th) a little early, I have played a large amount of the game. As someone who played a lot of Diablo III upon it’s release and while I am also tentatively waiting for the next Diablo game to arrive I thought I would try out one of its competitors.

I am more than pleasantly surprised by the simplicity yet enjoyability of The Mighty Quest for Epic Loot.

The game starts you off with a lot of hand holding and guidance through an incredibly simple tutorial. The fact that I had to go through tedious, sometimes lengthy explanations of aspects of the game is one of the few gripes I have with the game. Having said that I am the sort of person who likes to figure things out for myself and not be shoe-horned in to doing something that I may not want to do at that time. For example, I wanted to look through my gear and stats but the tutorial lead me to having to instantly play the next level available to me.

Having said that, there were many aspects of the game (after I got out of the annoyingly compulsory tutorial act) that I very much enjoyed. The animation for your character and the enemies are both very well done and make it very clear when and where the enemies damage is going to land. Although, I did find some enemies abilities almost impossible to dodge – the game can spawn 4 or more archers in front of you and you don’t quite have enough time to be able to wipe them all out before they take their shots – these are one of the few animations that are hard to read and almost always ended up in me taking a little bit of damage.

Controlling fast paced games on mobile can sometimes be a little challenging, however The Mighty Quest for Epic Loot has a very simple yet incredibly effective way of controlling movement and mechanics in the game – All with one thumb. You swipe and hold to run, swipe to roll and tap to attack and use abilities. At the start of the game you can also choose to use your left or right hand to do this which is a great addition and inclusive to all. A nice touch, that’s for sure.

The level design for the most part is fairly samey, having said that, I have only managed to play a couple of acts of the game. They feel like slightly recoloured versions. Having said that the layout of the levels are great and I have enjoyed searching for those extra hidden away areas for those extra chests and occasional enemies. The layout of the levels also works well with the vertical layout of the game. You would expect this game to be played horizontally, however its verticality is a refreshing take on the genre.

In addition to the adventure mode, which is what I have predominantly played and spoken about in this review, there is also a ‘Trails’ mode and a ‘Arena’ mode. These are unlocked as you level up your character to ensure that you are ready for the slightly more challenging nature of them. The trails mode is enjoyable, especially if you enjoy the more grindy aspect of the game. I haven’t managed to play much of the PVP (arena) aspect of the game but what I have played I did have fun doing. I am also looking forward to doing more of it when I have levelled up my character even more so.

Check out the trailer for The Might Quest For Epic Loot:

Overall, I had a great time playing The Mighty Quest For Epic Loot and I can see myself playing it on my way to work as well as when I have a few minutes to chill during the day. If you enjoy dungeon crawler/hack and slash games then this one will definitely be up your street.

The Mighty Quest for Epic Loot is available on iOS and Android devices as of 10th July 2019.

The Mighty Quest for Epic Loot is exactly that.