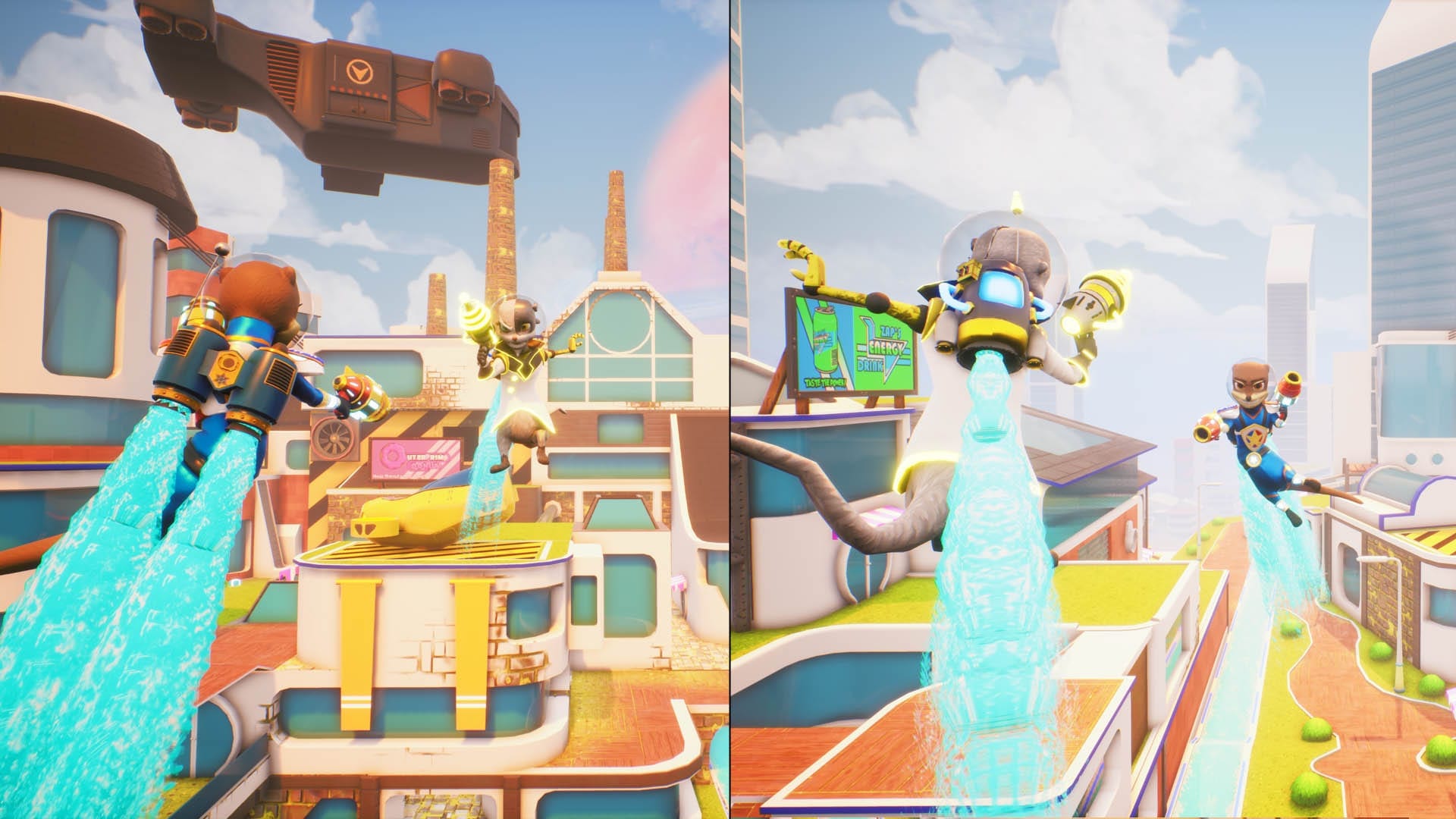 The Nintendo Switch is poised in the market as a family-friendly console, yet when it comes to split-screen couch o-op games, the offerings are pretty minimal. A few years ago I fell into the trap of assuming Splatoon 2 offered split-screen, and was left sorely disappointed as a result. Enter The Otterman Empire, a game which promises all the casual fun of Splatoon, with the added bonus of being able to play in the same room as your friends. The Otterman Empire is ready to change things up, offering up a shooter for all ages – with split screen available. How does the new release stack up against the competition?

The Otterman Empire is a game about otters, which realistically should have definitely been the focus of a video game long before now. You don’t just play as any old otter though, you play as otters with water-fuelled jet packs and guns – the must-have equipment needed for you to battle against the evil (otter), Tiko, who’s bent on destroying the bright and colourful game world laid out before you.

Your jet pack allows you to zoom across the map, delivering killer blows to Tiko’s various robotic minions, destroying lasers and taking out his ship. Your jet pack is fuelled by water, so it’s a good thing you’re a river-dwelling otter! You’ll need to refuel your jet pack by diving into streams around the map, similar to the way you refuel your ink in Splatoon.

It’s up to you and your pals to bring Tiko down through a series of different levels playable either solo or with up to three of your friends. It’s a delightfully simple concept, and this isn’t the sort of game that would really benefit from having in-depth lore or a complex discourse surrounding it. It delivers exactly what it says on the tin, which in three words would be “pew, pew, otters.”

Booting up the game will give you a few different options to get started. A tutorial level will teach you what you need to know, which is easy enough to understand for gamers of all ages. You play as an otter (starting off with Astrid, but with more unlocked later on), and you’ll need to use your weapons and your jet pack to zoom around the levels to complete different objectives.

The Otterman Empire offers up a Campaign mode (which can be tackled solo or with others through couch co-op), as well as a Versus mode. In Versus mode, you can either take part in a free-for-all shoot ’em up with the aim of taking down your friends and scoring the most points, or you can select missions for a little more structure. Both the Campaign mode and the Versus modes are very well balanced, giving you the choice to play with or against your friends. Remote play is also available on the Steam version, though there’s not yet any way to play together with other Switch users.

The most disappointing thing about The Otterman Empire on Switch is its controller support. The game can’t be played with one single JoyCon, meaning if you want to play with two (or more) people, you’ll need to have either multiple sets of JoyCons, or a Pro Controller. As a game promising couch co-op fun for the whole family, this was a let down.

There’s enough variety here to keep you busy for a good couple of hours, with different map choices and different missions to get stuck into. The Campaign mode could definitely benefit from a few more additions, and some additional mission modes would also be very welcome.

The Campaign mode consists of eight levels, most of which contain three stages. Each of these stages has a different objective, from keep-moving-or-it-explodes bomb handling to powering up robots. You’re awarded up to three stars for each of the stages, usually depending on your skill and the time it takes you to complete the mission.

You’ll need to rack up these stars to unlock future levels, allowing you to progress through the game. This was implemented nicely, as it meant that I didn’t need to get maximum stars on all levels to keep on going (though this window of progression does get smaller). Not all of the individual mission levels were my cup of tea, so having some leeway with this was a welcome addition.

As you play through the Campaign mode, you’ll unlock new characters, each with different suits, weapons and special skills to use to your advantage. Though there’s quite a lot of choice here, I didn’t feel the need to strategise and select characters based on the objectives, as they’re all pretty well equipped to handle whatever the levels might throw your way. Though this is a plus in my book as it means that the game is more accessible to every type of gamer, it does mean that those who adore collating their strategic load-outs may miss out.

The game is easy to pick up and play, with just a few buttons to take note of. You have your fly move, your dodge and your special attack, making it really simple for any type of gamer.

Shooting is less precise than I would have liked, with your reticule staying in the center of the screen and you needing to move the camera more than aiming the gun. This style of shooting felt less organic than I would have liked, and felt more functional than fun. As a result, I found myself enjoying the missions that relied on things like dunking bombs into enemy ships, or dodging through hoops, rather than the all-out shooting levels.

Another bugbear here is a small one: the “B” button is used in place of your “A” button. I’m so used to hitting “A” to accept levels and missions that I kept doing this and then accidentally backtracking to the previous menu. I was also disappointed to see that cutscenes weren’t skippable, meaning you might sometimes have to watch the same one again and again in your pursuit of stars.

The Otterman Empire is an indie game, so don’t expect any of the AAA glory you’re used to from your big shooters. Some of the animations aren’t too polished, lacking in detail which might have really made the game stand out (note: this may be down to the Switch port, as the game looks more polished on PC). That being said, The Otterman Empire is clearly focused on the fun and colourful over the realistic.

Playable characters each have their own distinctive look, with a handful of customisation options to make your options feel a little more like you.

Level design is simple yet effective, with each stage presenting different 3D heights to explore across maps suited to both on-ground and in-air travel.

Though the aesthetics aren’t mind-blowing, they’re functional and distinctive. Similarly, the game’s music is catchy yet repetitive, and a few more tracks would have been a welcome addition.

The Otterman Empire’s Campaign mode is very short and sweet, completable in just a few hours. Most of the fun you’ll get from this game comes from its multiplayer modes, so if you’re considering picking this one up to play with your buddies, this is where the magic will lie for you.

Sadly, the game doesn’t support the use of single JoyCons, meaning if you have one Switch and no additional JoyCons or a Pro Controller, you’re limited to the Campaign mode. This is the game’s biggest let-down, as it severely limits the couch co-op capabilities, arguably the biggest part of the title.

Playing with friends outside of the Campaign is where the heart of The Otterman Empire truly is, and its unique position as being one of the first family-friendly split-screen shooters on Switch makes it a game that you really shouldn’t pass up. If you have multiple Switch controllers in your home, that is.

Despite its flaws, The Otterman Empire shows a lot of promise and delivers some really fun co-op play – if you can overlook its issues.

This review is of the Nintendo Switch version of The Otterman Empire. Check it out on the Nintendo eShop here. It’s also available on Steam and Xbox. Join the Discord to try the demo version.