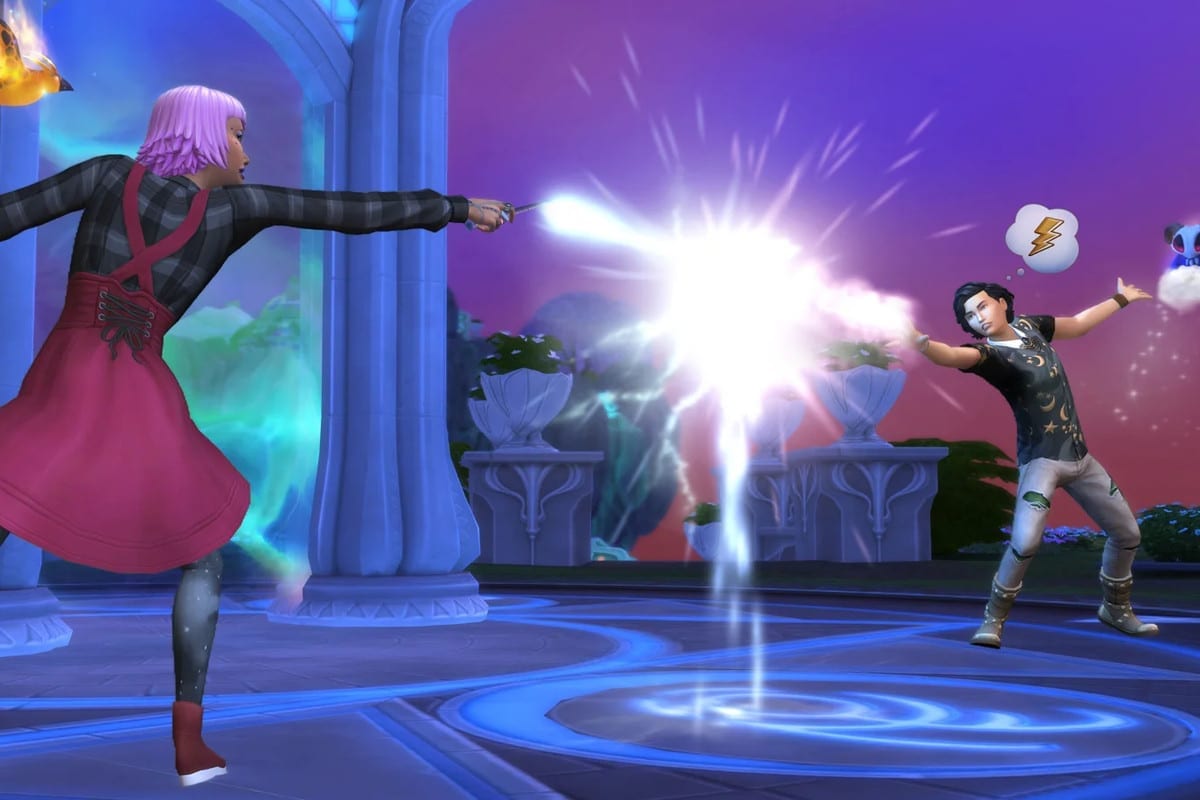 The latest Game Pack for The Sims 4 has just dropped, and it’s none other than the highly-anticipated Realm of Magic.

Magic packs have been a staple of The Sims since the very first edition of the game, and players were almost as desperate for a magic pack as they are for a University pack (please, EA?).

After spending quite a few hours with the new Pack, I have a lot of thoughts. First revealed earlier this summer, Realm of Magic surprised players by being a Game Pack rather than a full Expansion Pack, but that doesn’t mean it’s lacking…mostly.

Glimmerbrook and the Magic Realm

Realm of Magic introduces a new neighbourhood and a new world to the game. As always with Sims 4 neighbourhoods, it’s a really small area, about the size of Forgotten Hollow which was introduced in Sims 4 Vampires. One of the big criticisms about the new neighbourhood, Glimmerbrook, is its pre-built homes.

EA doesn’t exactly have the best builders when it comes to lots, but some of the lots in Glimmerbrook are just plain half-finished. One lot even has a door that leads to absolutely nowhere, and was seemingly put there entirely by accident. It’s not a good look. Thankfully, the Gallery is now stocked up with amazingly magical builds to replace the offerings from EA.

Within Glimmerbrook is a not-so-secret entrance to the game’s not-so-secret world, known simply as the Magic Realm. The Magic Realm is easily one of the most beautiful places we’ve ever seen in the Sims 4, looking both eerie and pretty in equal measure.

There are a few sections to enjoy in the Magic Realm, with doorway-like ‘portals’ taking your Sim between each location (without loading screens!). There’s the Duelling Grounds, Casters Alley which is like a less-interactive Diagon Alley from Harry Potter, and Magic HQ, where you can meet Sages and boost your magical knowledge.

It’s not a huge new world to explore, but there’s enough to do. It would be nice if this was a residential lot but it’s not, so expect your trips here to not last too long.

Of course the biggest new gameplay mechanic introduced by the pack is spellcasting. Similar to Vampires, if you make a magical Sim then their needs tab will see an overhaul, now showing a Charge meter and showing you how close you are to unlocking more magical experience points. These unlock traits in the same was as they do in Vampires.

The Charge metre is an odd thing, and not one I find really adds anything to the gameplay. Charge is gained when your Sim uses magic, but the more Charge that your Sim earns, the riskier it becomes to perform magic. When Charged, your Sim’s magic is stronger, but it could also kill your Sim so watch out. Thankfully there’s Discharge spell you can learn so you don’t have to wait for the cooldown. Discharge is really easy to learn though, which makes the whole Charge thing a little pointless in my eyes.

Just as important as spellcasting is potion-brewing, but again it seems oddly unbalanced. There are quite a few potions you can learn to make, and they’re all fairly easy to learn though you do sometimes need some rarer ingredients to do so.

Interestingly – and bizarrely – the Sims team has made one of the most OP potions in the game INCREDIBLY easy to both learn and make. The Potion of Plentiful Needs requires just one apple to make and will max out your Sims needs. Make just one, use a duplication spell (‘Copypasto’) and fill out your inventory and you’re pretty much set for life.

Sure, a max-out-all-needs potion is a great idea, but shouldn’t it take a lot more work than just one single apple…?

Along with spells and potions come curses, which you can perform on other Sims and which can knock you down if you incorrectly perform a spell or make a bad potion.

Curses are fun, and other Sims in the world will react to you if you’ve been cursed. They’re pretty rare to come across in-game though, and they’re easy to treat if you know the Decursify spell. Still, it’s a nice touch.

As always with Create-A-Sim items from a Game Pack, there’s nothing earth-shattering about what’s included. There’s some really nice pieces, including more natural-looking hairstyles for Afro hair, and some lovely new clothing items.

The sad thing is that there’s no new content for kids in the pack, which I know will disappoint a lot of people. In my opinion though, the new Build Mode items totally make up for this.

The Build Mode items included in Realm of Magic are really, really awesome. Not only are they perfect for this oh-so-spooky time of year, but they match really well with a lot of the content from Vampires.

That being said, most of it isn’t just something you’ll use in your creepy builds. There’s some lovely everyday pieces including countertops and islands, artwork and general decor.

The Sims 4 Realm of Magic definitely isn’t a perfect pack. It’s odd that characters like Bella Goth can be seen in the Magic Realm flying around on their broomsticks even though they’re not exactly canonically magical, and there definitely could be more to do in Glimmerbrook, which has just one commercial lot.

Personally I’m not really into the fantasy playstyle of The Sims – I have and always will prefer more realistic play, but I still got a lot of fun out of Realm of Magic.

I can’t say that I’ll only be playing in Glimmerbrook, like how I almost exclusively play in Sulani now, but I definitely get a kick out of flying on a broom, having a familiar and duelling with my enemies.

Considering this is a Game Pack and not an Expansion Pack, there actually is a decent amount of new gameplay to explore – quite possibly the most new gameplay we’ve ever gotten out of a Sims 4 Game Pack.

Is it worth the money? Absolutely. There’s more meat to Realm of Magic than, say Strangerville, and there’s lots more replayability and the potential to create really engrossing stories and worlds. Just don’t forget that this is a Game Pack and not an Expansion Pack!

Pick up The Sims 4 Realm of Magic right here.