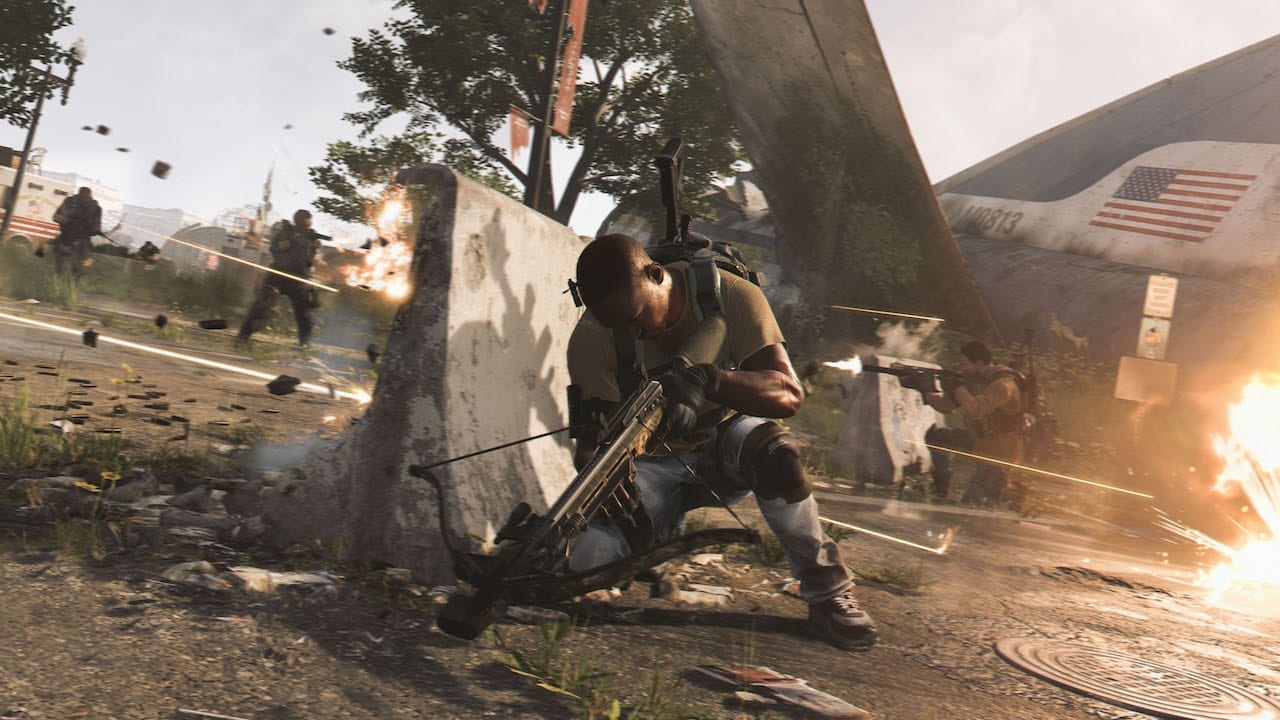 When Ubisoft finally released The Division in 2016, their vision for an immersive co-op experience didn’t quite live up to the hype. Striking a balance between creating a rich gameplay experience, paired with the mammoth task of facilitating the mechanics of an MMO is difficult, especially when it comes to shooters. As for its chaotic dystopian setting, The Division managed to create an intriguing concept that sees it on par with titles of the same aesthetic, rather than simply playing dress up. Massive Entertainment clearly had a vision for what their multiplayer shooter could and should be, so it’s no surprise that The Division has been graced with a sequel. With The Division 2 making many of the same promises as its predecessor, will Ubisoft manage to solidify the series as a unique experience?

Following on from the first title, the plot revolves around the struggle to restore society after a smallpox pandemic sends America into disarray. The infection, known as Green Poison, first swept its way through New York in 2015, prompting the US Government to activate a group of sleeper agents known as The Strategic Homeland Division. As a member of The Division, your task is to assist a group known as the Joint Task Force, or JTF, in restoring archaic America from its dire state. Seven months after the events of the first game, we now find ourselves in Washington D.C, assisting the JFT to restore order to the capital, which finds itself overrun with gangs and criminals.

The Division 2 definitely feels like a Tom Clancy title with its overtones of espionage, conspiracy and action. Yet, the story doesn’t do much to try and immerse the player, meaning it often takes a back seat to what the game has to offer as a whole. Sure, there is an active plot and main missions which drive the story, but it’s far too easy to forget why you’re storming through a building, gunning down assailants in the first place.

This is something that probably derives from the MMO genes of the game, where as long as a mission has some sort of point and objective, we don’t need to worry about its significance to the plot. That being said, there are various intriguing pieces of narrative to be found within the finer details of our environment, with little pockets of information being delivered in quite subtle ways. As long as you are invested in the gameplay, The Division 2 will provide you with enough context to care about the world you’re fighting to save.

First things first, you’ll have to piece together a persona using the game’s character creator. If you’re familiar with the horrors of character creation within an RPG, then you’ll know the score with The Division 2. To give the character creator some credit, most of the pre-sets and basic tweaks look good, preventing any accidental mishaps that could leave you looking like an orc. If you do decide to venture down the rabbit hole of advanced scaling and morphing of your character’s face, be prepared to sit for hours before launching into the actual game. If The Sims has taught us anything, it’s that character creation is as addictive as nicotine.

The Division 2 drops us into the unruly concrete jungle of Washington D.C, featuring a similar aesthetic to the previous labyrinth of New York. Despite similarities, however, our new environment expands itself beyond the comfort of cityscapes, venturing into the idea of suburbs and rural areas that have been warped by societal collapse. This makes for a fresh, yet familiar, sandbox that prevents intrigue from withering away. Washington D.C also feels less empty than The Division’s take on New York, with its expansive map having more purpose for exploration than before. Whether it’s to hunt for loot or elaborate on the lore of your environment, it’s definitely worthwhile exploring the entirety of the map within The Division 2.

The visuals within the game maintain the high-quality standard of most games under the Ubisoft branding, with a sense of realism attached to characters and the environment. The variation in weather biomes and use of colour help to distance this apocalyptic experience from the staple muddy pallet that many games feel is mandatory when creating their ruinous world. Considering the state of AAA game launches, The Division 2 managed to survive its debut without any major bugs or glitches. This will probably bode quite well for its reception overall, as nothing leaves a saltier taste in the mouth than game breakers or poor performance. There are the occasional texture issues with the game, such as popping and aliasing, however, they’re never much of an issue.

The important thing about our in-game setting is how it convinces us that civilisation has been torn apart without warning. It’s easy to default to rust and dust when it comes to the apocalypse, yet The Division 2 instead focuses on filling its world with life. Little details like advertisements for businesses and the remnants of Christmas decorations convince us that Washington D.C wasn’t always a chaotic mess, which is important when it comes to immersion. The way environmental objects tie in with gameplay mechanics is also satisfying; with vending machines, car and dumpsters serving as cover points. While these objects are placed to provide shelter from gunfire, it doesn’t feel like they’ve been purposely placed there for your own convenience, which helps make things more believable.

Traversing within the upturned buildings of the capital feels similar to the first game, with some extra detail being implemented. Areas suffer less from the procedural structure of clearing out rooms while taking cover, in a similar vein to the likes of Uncharted, with scenarios feeling more natural to the environment that you’re fighting in. Certain tropes still remain true to these areas, such as conveniently placed petrol cans and that perfect spot for a sniper to sit and eat his sandwiches, but this isn’t as blatantly obvious as it is in similar games. You’ll sometimes be caught off guard by the layout of an area, as things aren’t always as predictable as you’d think, such as enemy placement or the effectiveness of cover.

The combat within The Division 2 has received an overhaul since its predecessor, with gunplay feeling a lot more satisfying this time around. Damaging enemies with gunfire feels a lot more impactful, with shots affecting how the enemy reacts and moves. The damage counters also make a return, displaying how much HP the target is losing, which ties in nicely with the RPG mechanics of the game. Enemies come in the form of gang members, from three factions known as the Hyenas, True Sons, and Outcasts, all of which have their own quirks and backgrounds. The range of enemy types helps to break up the repetition of combat, preventing encounters from seeming predictable. The enemy AI has thankfully received some tweaks, meaning you won’t be distracted by absurd reactions to being shot in the face.

The RPG mechanics continue to be quite comprehensive, considering that this is a third person shooter hybrid. The incentive of being able to use various tiers of loot makes the grind to reach higher levels worthwhile, with tonnes of loot being scattered across various chests and enemies. As you’d expect, loot works on a rarity system, being colour coded to indicate how robust it is, from worn to superior. Each piece of equipment will increase your firepower, as well as your armour and gun handling stats. The fact that this directly ties the acquisition of loot to your progression through the game makes engaging with exploration and levelling up all the more worthwhile, ultimately providing various options on how the game can be played. 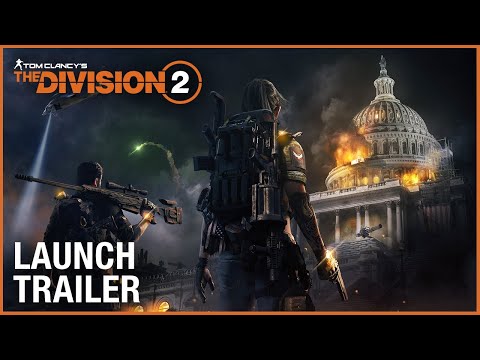 As you may have expected, The Division 2 is designed to be played cooperatively with a group of four people, which can either be people you’ve invited to play or from the matchmaking system. Playing with a group will give gameplay that strategic dynamic that co-op brings to the table, relying on effective communication and resisting the urge to be like Leeroy Jenkins. Overarching from this is the new clan system, which allows 50 players to share and grow within a community, sharing voice chat, an insignia and rewards for completing stretch goals.

While this might suit the online social piranha, some of you lone wolves out there might be wondering if it’s possible to play the game on your own. The short answer to this is yes, however you’ll perhaps find some mission setups more challenging, due to the amount of heat that you’ll receive during combat. Your perceptions of gameplay may also vary by playing on your own, as after all, this game is designed to be played with a real human squad, even if they are mildly irritating.

The Division 2 has managed to elaborate on its established formula while addressing everything that held the first game back. While the story isn’t the most compelling, it does enough to engage the player and facilitate them within the multiplayer carnage of pandemic chaos. The combat is satisfying and fluid, while the progression system fulfils the needs of the loot obsessed and level grinders alike. The structure of The Division series is proving to be unique in its own right, strangely drawing from what you could imagine an Escape from New York game to be like, with a more serious tone of course. If you’re a fan of co-op shooters and RPGs, you’ll likely lose hours playing within this immersive sandpit, and if you’d rather go it alone, then that’ll be a great experience too.