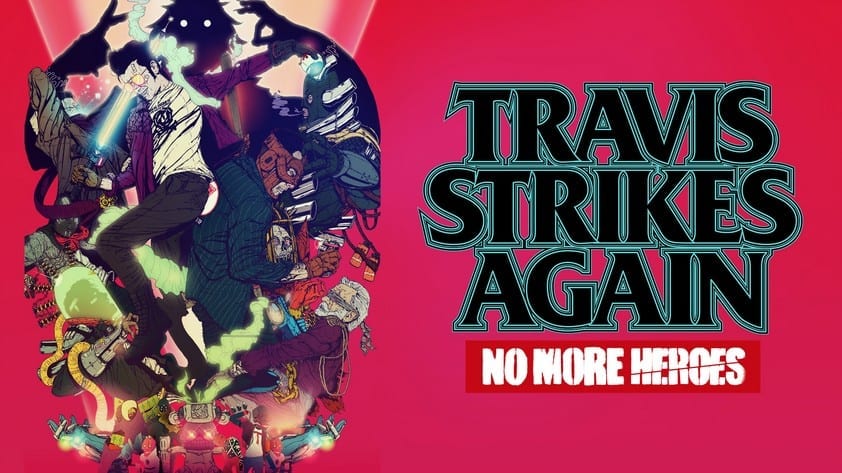 Tweet
Share
Share
Pin
Just to get this out there, I am a really big No More Heroes fan. The second game in the franchise (No More Heroes 2: Desperate Struggle) was one of my favourite games on the Nintendo Wii, and I sunk a lot of hours into it. I discovered the series when hunting for a hack ‘n slash to occupy my time, and when a new NMH was announced for the Nintendo Switch, I was more than excited. There was just one slight little thing – the No More Heroes Switch game didn’t look anything like a NMH game.
Instead of swinging around a beam katana with a swiftness and dexterity that you don’t find anywhere else on Nintendo, slaughtering your way through enemies, the game’s announcement trailer was top-down combat and general weirdness. Still. Travis Strikes Again: No More Heroes had to be something I tried, even though I assumed I probably wouldn’t like it, seeing as it appeared to deviate so much from the series I love.
When you start the game it feels pretty overwhelming, especially if you haven’t played a NMH game before. It assumes you know the story so far, but the tongue-in-cheek and fourth-wall-breaking narrative gives you a break in its usual witty style, so even if it looks intimidating, it’s still very approachable for newbies.
It’s games within a game (or really, six games within a game), and as Travis Touchdown, you delve between his world and the world inside his Death Drive MK II – a seemingly haunted console that’s reminiscent of some of the best Creepy Pastas on the web.
Travis  and his arch-nemesis Badman – trapped in this virtual world – have to work together to collect the six Death Balls. Each Death Ball unlocks a different in-game adventure, ranging from a murder mystery to a racing game to puzzles and platformers. Honestly, there’s a lot to unpack here, but it’s a fun and wild ride so just bear with me.
The game makes the most of the freedom that its storyline allows it, using different textures, styles and gameplay mechanics throughout to make each Death Ball quest really feel like a new game. The murder mystery set in a mansion is very reminiscent of the PlayStation 2 graphics, but Death Ball cutscenes do a great job of replicating old-school text adventure games.

Despite differences between the six games, you’re always Travis, you’re always swinging a beam katana, and you still save your game in the toilet. Although gameplay differs, this is definitely still a No More Heroes game.

The intuitive combat makes this hack ‘n slash game very easy to pick up. You have your four basic moves and can collect new moves as you progress. These new moves can be mapped to your buttons in whichever way you choose, meaning you can really tailor your attacks to your play style.

Travis Strikes Again is very realistic when it comes to the games within it, but this can get frustrating at times. As you work your way through each of the Death Drive games, you naturally improve your skills, come up with your own tactics and finesse your combat style. However, once you’ve done the levels, completed the boss battle and start up on the next Death Drive game, you’ll find the first sections of the new experience way too easy. It’s realistic, in that the early levels of any game are easier to allow players to get the hang of it, but when this is your fifth Death Drive game it’s safe to say you know the controls.

The Switch’s Joy-Cons are just similar enough to the Wii remotes to make playing as Travis incredibly fun. You shake your controller to charge your katana, but you’re not waving or waggling it around like a crazy person, as the Wii NMH games often had you doing. I got the most out of the game when playing with the Switch docked, not for any technical reasons, but just because it felt more natural than handheld mode.
The game fully supports a nice round of couch co-op, with you and your closest buddy taking on the various bosses as Travis and Badman. You can choose to use your experience points to level up either your character or theirs, and again, their combat moves are fully mappable. It’s fun with two, and it doesn’t decrease the difficulty level of the game too much.
Arguably, one of the most important parts of a hack n’ slash game (or a game where you wield what’s basically a light sabre) is the music. Travis Strikes Again does a great job with its tunes, alternating between slower and more methodical music for puzzles, fast-paced and techno-style music for battles and 8-bit style beeps for cutscenes. It’s nicely done, but I would have preferred more high-tempo stuff as seen all the way through previous games.
I enjoyed playing through the game with Travis sporting a Hatoful Boyfriend T-Shirt, which was just one of the dozens of game-related tee available to purchase with your in-game earnings. Other themed shirts you can dress Travis in include The Legend Of Zelda: Majora’s Mask, Undertale and The Stanley Parable. A nice touch.
Travis Strikes Again: No More Heroes definitely deviates from the series’ standard, but it implements the changes in a way that’s refreshing, unique and incredibly fun. It’s a very different experience, which is definitely its stand-out feature. Mocking Epic Games, featuring live action cut scenes, emulating 1980s gaming styles and throwing in Easter eggs left right and centre, it’s a wild ride without even scratching the surface of what you can do here. There’s more of a depth to this game than its predecessors, as it really works to encourage intuitive play and working to your strengths. This is a title that your Nintendo Switch deserves.