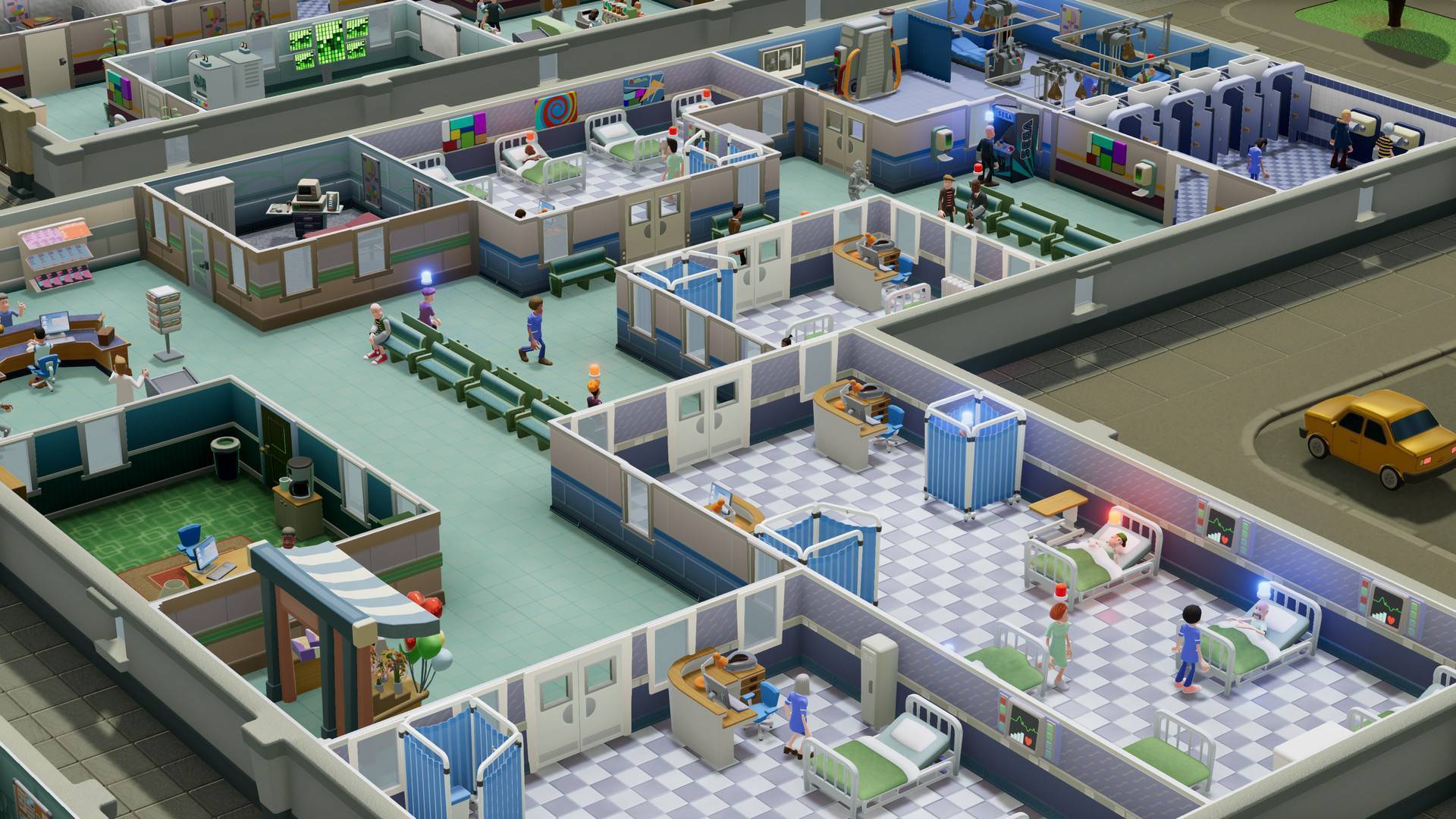 I don’t know about you, but I’ve always wondered about what goes on behind closed hospital doors. With Two Point Hospital however….. I’m still left wondering, but that’s alright as there are plenty of other things to keep me interested in the meantime.

Hospital simulation and a great sense of humor have been combined together by Two Point Studios and SEGA in this new release. While it appears simple on the surface, as with all hospitals, there is a lot more going on that needs to be balanced and managed. It’s not just patients who need looking after, but staff and facilities too! 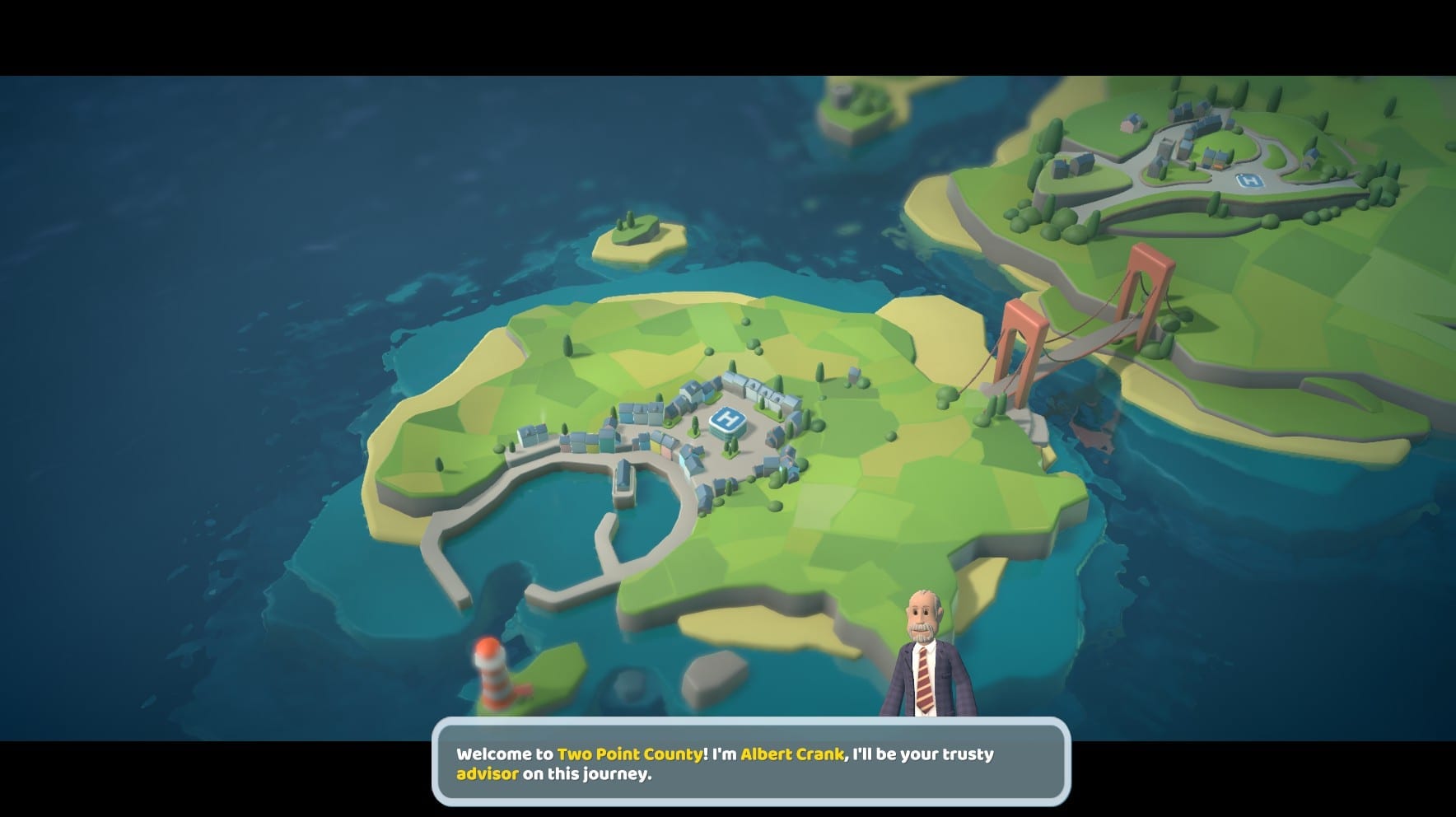 On the surface the premise seems pretty simple right? Manage a hospital. Don’t kill people. Nice and straightforward. However, while that’s a great goal to have it’s not the only thing to keep in mind. Two Point Hospital challenges the player to create not just one function hospital, but multiple hospitals across multiple locations.

Each hospital can house multiple buildings and there are a plethora of patients, conditions and challenges just waiting to be tackled. Success means things like passing inspections, managing your money and raising the reputation of your hospitals. The game has a fantastic sense of humor and doesn’t take itself too seriously, which is good because this simulation is definitely not meant to reflect real life. Unless you’ve seen people regularly walking around with giant pans wedged on their heads…no? ….thought not.

As you might expect the graphics are bright and crisp. The entire game has a cartoon feel to it, but with a good amount of detail to objects and npcs alike. It fits the theme well, and things like the room building animations keep the lighthearted feel going.

Patients and staff are unique, with each condition represented with different affects on patients. From light-bulbs for heads, right through to looking like rock stars, conditions are easy to identify. The treatments available are also hilarious, and it’s very easy to find yourself stopping what your doing when a patient with a new condition wanders in. 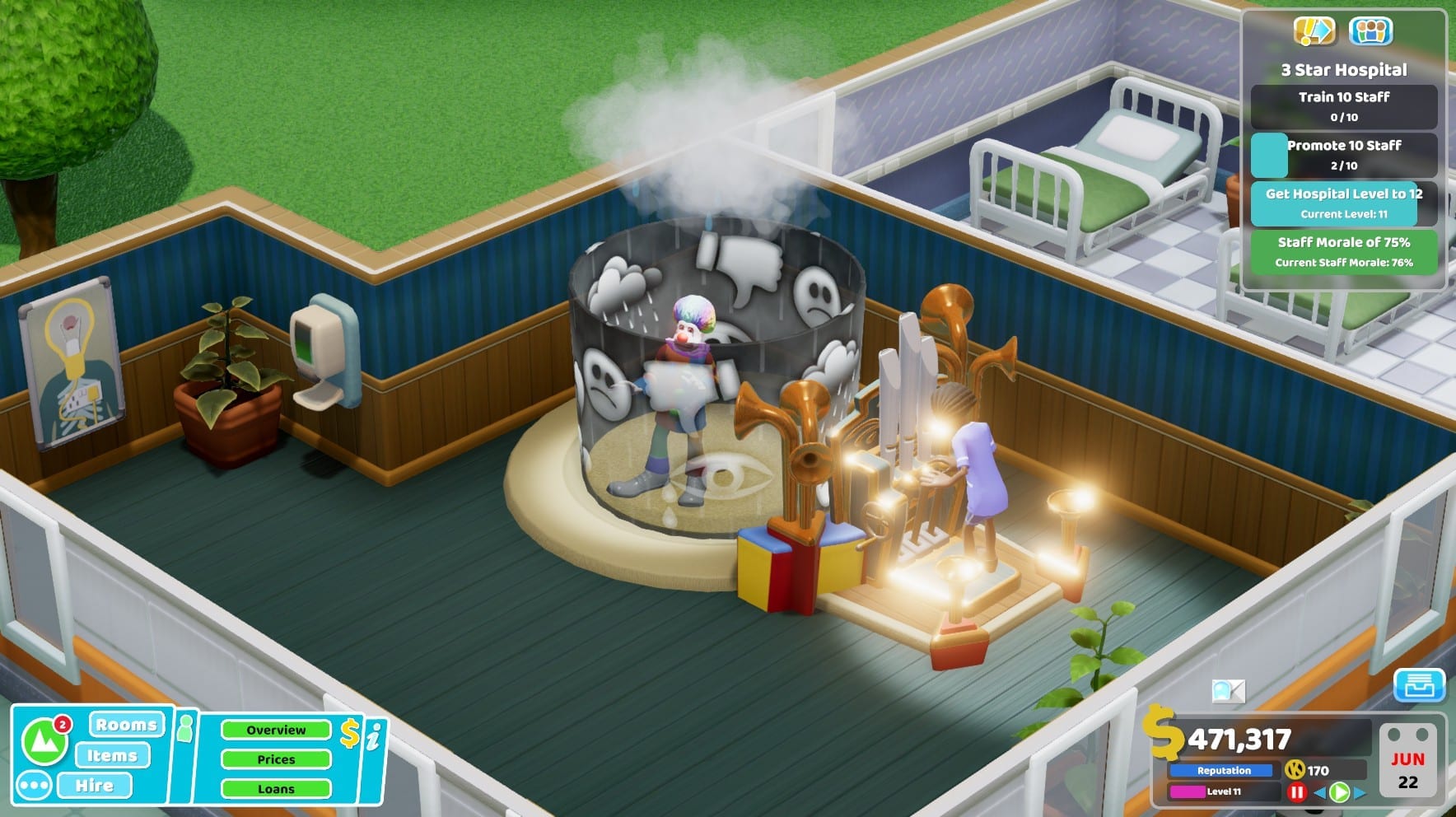 The interface is easy to navigate and there are plenty of menu options for graphics and the like to allow people to play on a wide range of PCs. Throughout the play session objectives are clearly displayed in the upper right corner, and there are many hospital overlays that can be used to monitor conditions of the facility in the blink of an eye.

Audio for Two Point Hospital is done in a fun way, through radio stations. While these are not new to simulation games, each channel has been designed uniquely. They even come with (very funny) adverts for products or places. Players can switch between stations at will, allowing you to set your own game mood.

There is another aspect that you absolutely must try, even if you’re not a fan of having game sounds on. There are hospital announcements that get broadcast at random intervals throughout a play session. The messages are hilarious and some of them will have you doing a double take to make sure you heard them right the first time. 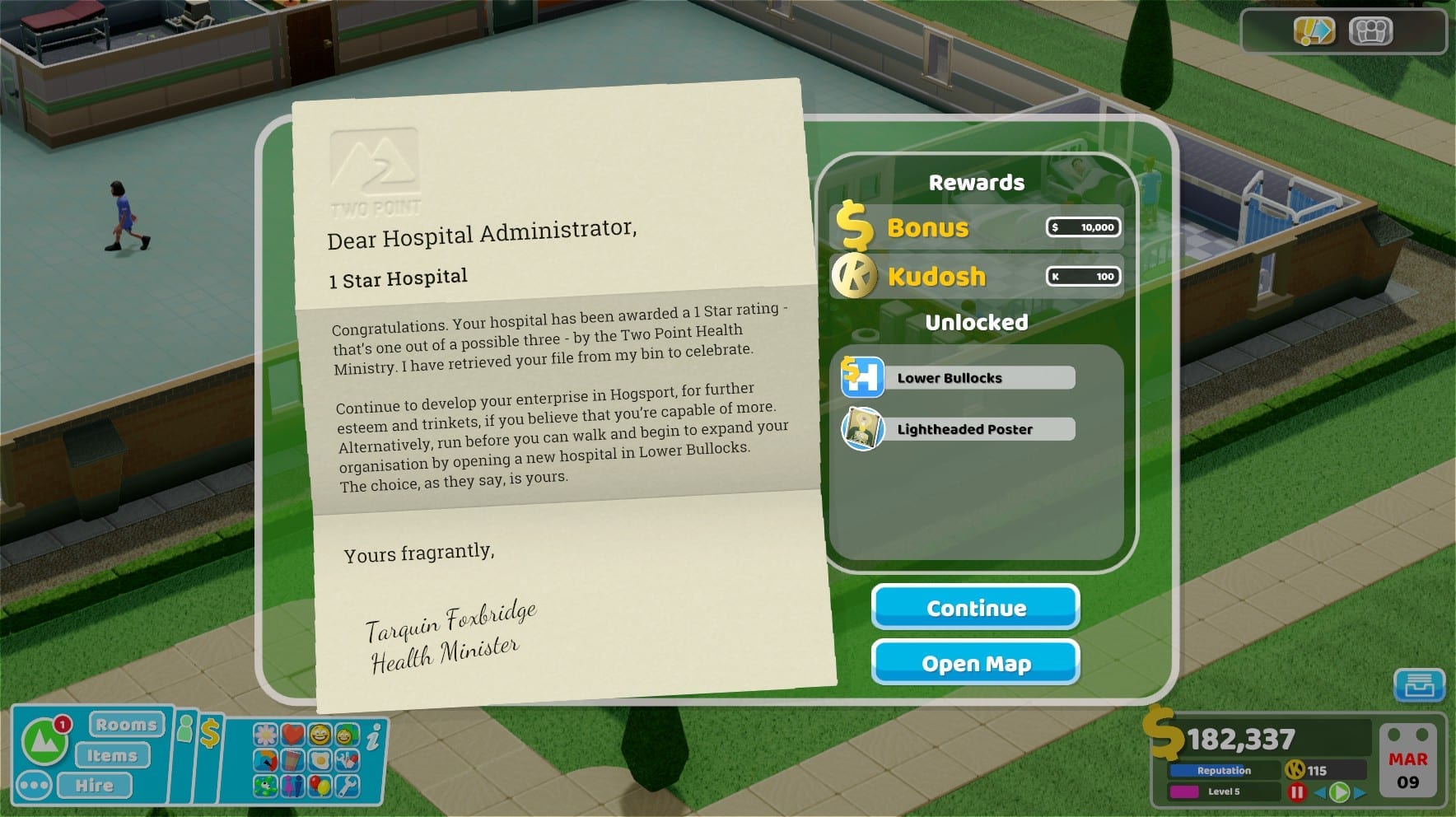 There is plenty going on in Two Point Hospital and lots to manage. Budgets, staff, patients and the facilities used to treat them, all have to be carefully balanced to ensure success. Thankfully, the game introduces new items, rooms and illnesses slowly at first so even players new to the genre will be able to get started right away.

Players can customize their hospital to their hearts content. From room sizes and orientations, to the items within it, players can design their hospital any way they want. Not only that but many of the items you add, can be upgraded over time. This allows you to unlock new options and features, without having to build over and over.

Queue times have to be watched, and urgent cases will need to be rushed through ahead of the rest. It then becomes a challenge of having enough staff available at all times. No two members of staff are alike, and while there are some general practice rooms, others require specific skills or abilities to work in them. So, early on it can be a little bit of a struggle, waiting for a psychiatrist to apply to the hospital for example. As you grow your hospital there is a nice benefit that becomes available, a training room. Staff can train others in skills they possess, or an external trainer can be brought in to train entirely new skills. This is a great way to fill skill gaps early on, and to specialize doctors and nurses later on.

The controls are smooth as you’d expect, and very responsive. One particularly nice feature is being able to pick up and move an entire room and its contents, allowing you to easily swap facilities around as needed. Time controls also help, meaning if you need to pause and think about where the best location for something is, you can. 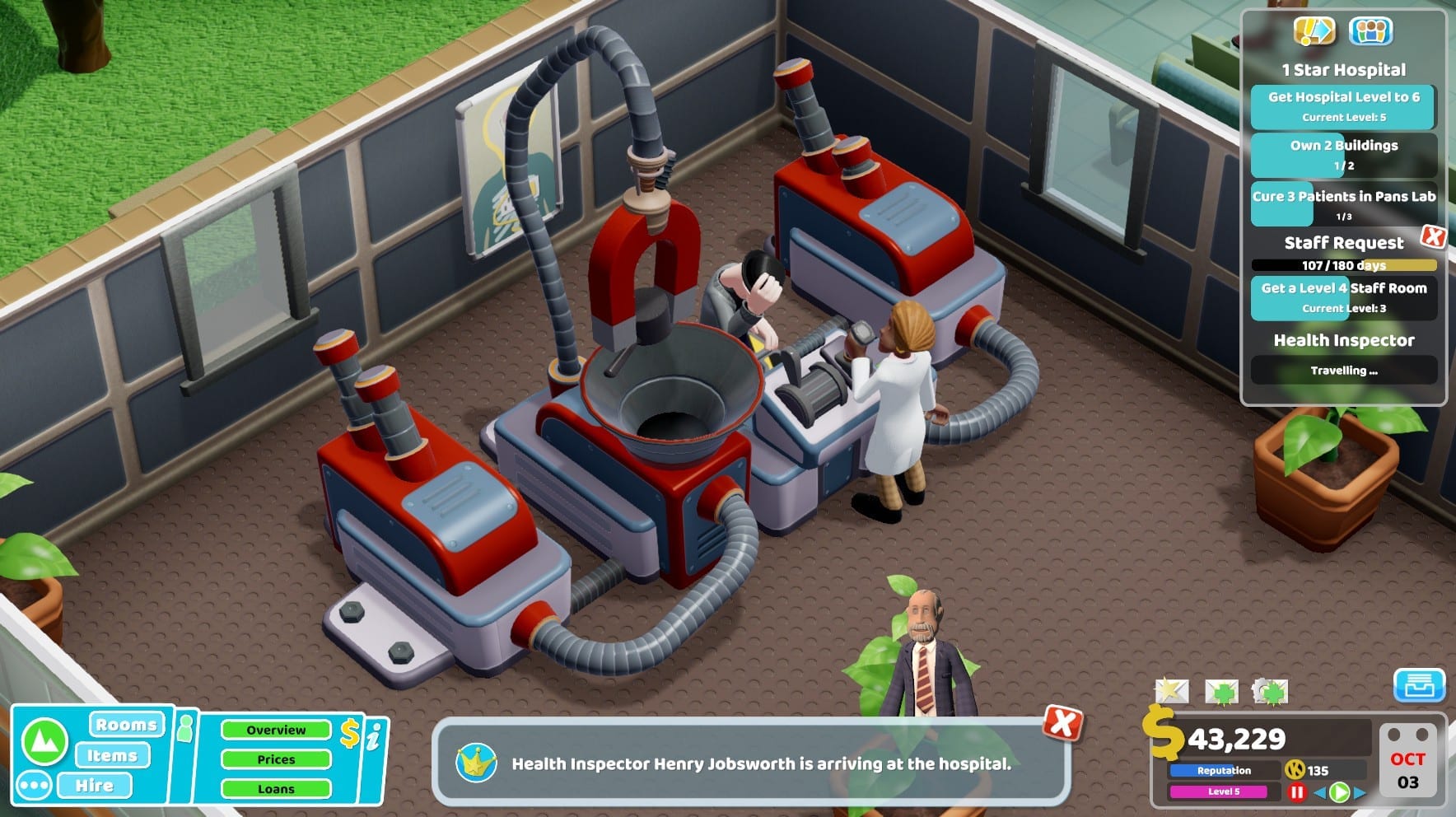 Your aim is to raise funds and the hospitals reputation. Something that gets reviewed every year, and some awards are up for grabs for hospitals that are run particularly well. There are even some of the less glamorous aspects of hospital life included, such as health and safety inspections.

Challenges provide some additional goals to aim for, alongside the general hospital development tasks. Given that you can run and operate numerous hospitals as part of your organization, there’s never going to be a dull moment.

Two Point Hospital is an extremely funny game, with lots of systems and requirements to juggle that keep things interesting. Simulation fans looking for a lighter-touch, management style game will enjoy this immensely. The game does not set itself up to be a serious, deep simulation experience. Instead it aims to entertain while providing a decent level of challenge. The sheer number of systems and variables you have to keep an eye on mean that even if things seem fairly straightforward, being able to multi-task your way through them becomes more and more essential. Overall, Two Point Hospital is a bright, fun simulation game that brings a refreshing twist to hospital management games.